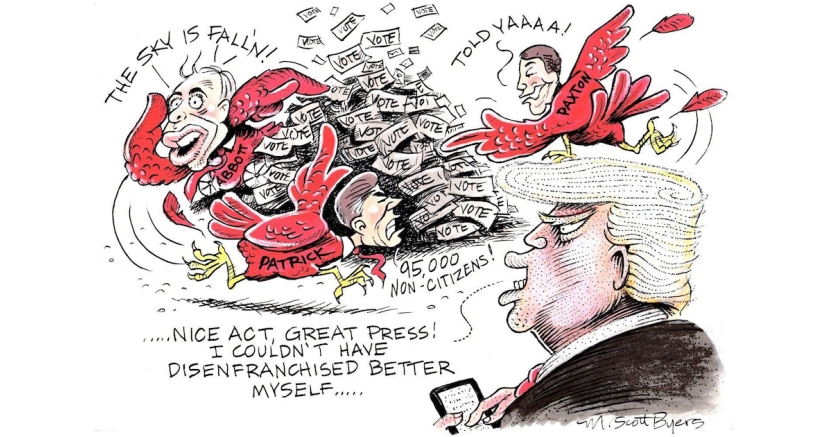 Those who actively engage in efforts to take voting rights away from U.S. citizens are simply not fit for democracy. Sorry to be blunt, but Gov. Greg Abbott, Lt. Gov. Dan Patrick, Attorney General Ken Paxton, that means you.

It is hard to understand how those who would suppress the votes of others rationalize their anti-democratic, Vladimir Putin-like behavior. Nothing is more sacred in a democracy than voting rights, and for years Texas GOP officials have soiled voting rights to protect their power and their pocketbooks.

Recently, Abbott and the others embarrassed themselves and the state of Texas with a scheme to knock tens of thousands off the voter registration rolls without cause. After comparing the voter rolls to driver’s license records, they took a flawed number of people — 95,000 — and strongly implied that many of that number were registered to vote but were not citizens.

Secretary of State David Whitley immediately sent the list to the attorney general for investigation and prosecution, further implying that these people had violated the law.

The “report” from the Texas Secretary of State — an Abbott appointee who would not have acted without instructions from the governor — said some 58,000 people on that list had voted some time over the last couple of decades.

They didn’t take account of the fact that a large number of those folks had become naturalized citizens and were registered and voting in accordance with the law. The list was sent to county voter registrars with instructions to purge their voter rolls accordingly if citizenship couldn’t be confirmed.

Then, of course, county officials discovered the list contained thousands of legitimate voters, many of them people of color who might not vote for Republicans.

The scheme has fallen apart now thanks to some attentive county election officials and alert journalists. But the revelations don’t solve the deeper problem.

American democracy is now plagued with elected officials who no longer believe in it. To protect their power, they are willing to subvert it at every turn. To suppress the votes of fellow citizens is to sell out democracy.

It is, of course, part of a wider disease that’s reached epidemic proportions in this era of Donald Trump and outspoken white nationalism. Racism is on the rise, and Trump is spreading it. Trump supporters like Abbott, Patrick, Paxton, U.S. Sens. Ted Cruz and John Cornyn have yet to oppose Trump’s bigoted speech and acts.

They don’t have to do bigoted things or say bigoted things to take advantage. Long before Trump, the Republican Party did what it could to appeal to racist voters. Most never contemplated that that “base” would one day control the party. Now that it does, however, none of the officials do anything to turn it back.

Destroying the voting rights of people of color, students and others who Republicans fear might oppose them seems so un-American that surely no American would do it. But, they do it. Aggressively, persistently.