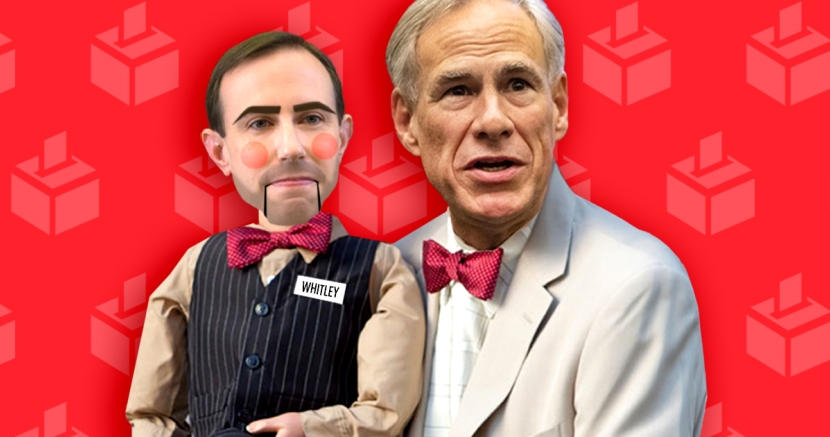 "The Purge is dead, long live the purge!"

Earlier this year, Texas Republicans kicked off the new year with a big fat voter purge that has since been settled out of court. Republicans shrugged it off, probably relying on the notion that it was a mistake based on bad data.

As it turns out, the biggest mistake was that they got caught red-handed trying to suppress the votes of nearly 100,000 people.

Two stories out this week show this issue is far from settled. First, emails obtained show that Republican Gov. Greg Abbott requested the purge, indicating he was the one pulling interim Secretary of State David Whitley’s strings all along. Second, a request by the Texas Tribune to review the list of the 100,000 voters was previously denied due to the list being part of a criminal investigation. But now that the issue is settled, the Tribune should have access to the list, right? Not according to indicted Republican Attorney General Ken Paxton, whose office states that the list is still part of a criminal investigation.

"The purge is dead, long live the purge!"

This is further evidence that you can't trust Republicans to protect your right to vote, even after they've spent nearly half a million dollars to supposedly settle the case. Texas conservatives are living in the fastest growing state in the nation but their voter growth is stagnant, thus in this state and in many others - voter suppression has become their strategy.

It's why they tried and failed to pass voter suppression legislation in this year's legislative session.

Even the Houston Chronicle is stating that Republicans have some explaining to do.

This is why progressives continue to fight for voting rights, and it's further proof that we can't let up on the fight for progress in our state.