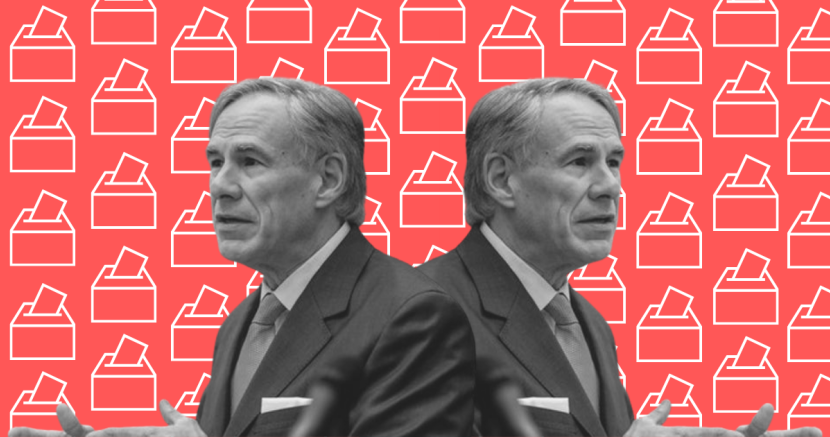 Wesley Story
Gov. Abbott was right to extend early vote by one week, but now Republicans are suing to take it away.

Conservative leaders and two Republican candidates have filed a lawsuit to block Gov. Greg Abbott’s order that extended early voting by an additional six days for the November election.

Abbott’s decision to extend early voting was a safety measure for Texas voters who will be voting in-person in the midst of a global pandemic. Other than his early voting order, Abbott has done little to protect the right to vote over the last few months. He still refuses to expand mail-in voting, and he’s not even requiring masks at polling stations. But this extended early vote period, fought for by voting rights activists across the state, was a huge victory, and one that will benefit Texans during the upcoming election in many ways if it remains in effect.

By extending the amount of time people have to get out and vote in person, voting will be more spread out and more manageable for the poll workers. It means that there won’t be as many folks at the polling place trying to vote all at once. It means shorter lines, more social distancing, and less spread. This is good for all Texans’ public health and safety, and it helps protect our right to vote.

By suing to block one of the few logical steps Abbott has taken to protect Texans during this pandemic, Texas Republicans are showing their true colors — they are afraid of the ballot box. Even when one of their own recognizes the importance of a move like this, they cannot stand to see Texas voters at the polls.

Extending early vote by one week is progress, but Gov. Abbott can do more to protect the vote.

We should also expand access to voting by mail and extend the period of time in which county election officials are required to accept mail-in ballots so that every Texans’ vote is counted. Given the crisis we’re in with the coronavirus pandemic, as well as the attacks from the Trump administration on the U.S. Postal Service, Abbott should be doing everything in his power to protect the right to vote.

Recently, Progress Texas joined over 40 other civil rights organizations in calling on Abbott to take the steps necessary to ensure all Texans' votes are counted in November. Every Texan deserves to have full confidence that they can cast a ballot that is fairly and accurately counted.

This lawsuit is proof that Texas Republicans will stop at nothing to suppress voters, even if it means turning on their own governor. We must continue fighting against this blatant voter suppression, while also encouraging and educating one another about the upcoming election.

For those who plan to vote by mail, you must apply for a mail-in ballot early and send in your ballot at least two weeks early, or in person. For those who plan to vote in person, it is still important to vote early. These attacks are going to continue through Election Day, but if we’re vigilant and prepared, then we can cast our ballots and elect progressive leaders who will work to defend our rights instead of conservatives who seek to suppress them.