Texans shouldn’t have to risk death to vote 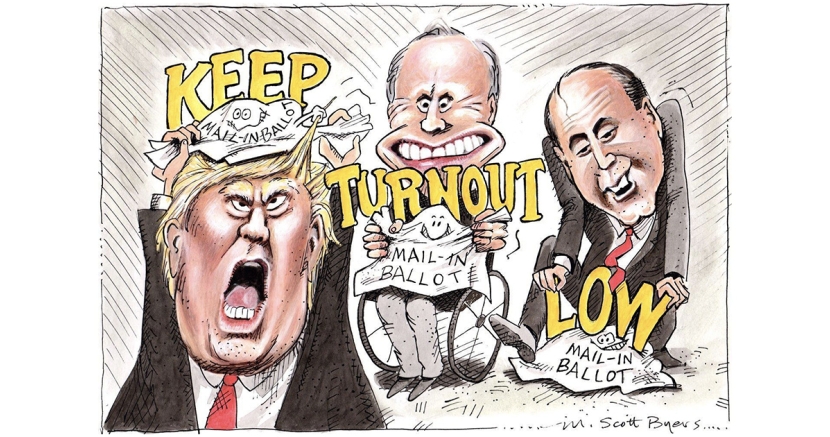 Glenn W. Smith
Texas Republicans are telling Texans that if they want to participate in democracy, they must risk death.

Republican candidates in Texas and across the nation have a better shot at winning when voter turnout is low. Even President Donald Trump admits that truth.

“They had things – levels of voting, that, if you ever agreed to it, you’d never have a Republican elected in this country again,” Trump said in an interview about broadening access to vote-by-mail ballots in light of a raging pandemic.

Trump is clearly frightened at the prospect of high voter turnout in the 2020 elections. The fright is not new among Republicans. They’ve been working to suppress the votes of qualified citizens for decades.

The legal battles are already intense in Texas. Democrats obtained a state district court order allowing all voters to apply for mail ballots in the upcoming July runoff elections and the general election of 2020.

Current state law allowed mail ballots by those 65 and older and those suffering from a disability who believe their health threatened by voting in person.

“Fear of contracting COVID-19 does not amount to a sickness of physical condition as required by law,” Paxton argued in a recent court filing.

Paxton is telling Texans that if they want to participate in democracy, they must risk death. Please pause a moment and let that settle in your mind. Think of the democratic ideals and practices you were taught in high school civics classes, the struggle for voting rights that lasted more than 200 years before legal universal suffrage was achieved.

Sadly, Republicans view these practices, ideals and achievements as little but obstacles to their power.

For decades, courageous African Americans risked their lives by voting. Many died at the hands of racists. For instance, back on November 2, 1920, a young black man named July Perry cast his ballot in Ocoee, Florida. Before the day ended, Klansmen had murdered Perry and others and burned Ocoee to the ground.

Today, it would be understandable if all Americans were to taste the fear that July Perry must have tasted that day. Maybe it won’t be Klansmen we fear, but to vote in public likely means we face COVID-19, a killer far more deadly than the Ku Klux Klan ever was.

Last year, Abbott and his secretary of state got caught launching a scheme aimed at knocking thousands of qualified citizens off the voter rolls. Letters were to be sent to voters, and if they didn’t reply, they were stricken from the rolls. You can guess who the targets were of that scheme – voters the GOP felt might oppose them.

Until 2018 when a federal court order was lifted after 35 years, the Republican National Committee had been prohibited from engaging in precisely that activity.

Today, Republican-led state governments are trying to do what the federal courts have said violates the Constitution. So are state GOP parties and operatives.

The battle over mail ballots should be viewed in that context.