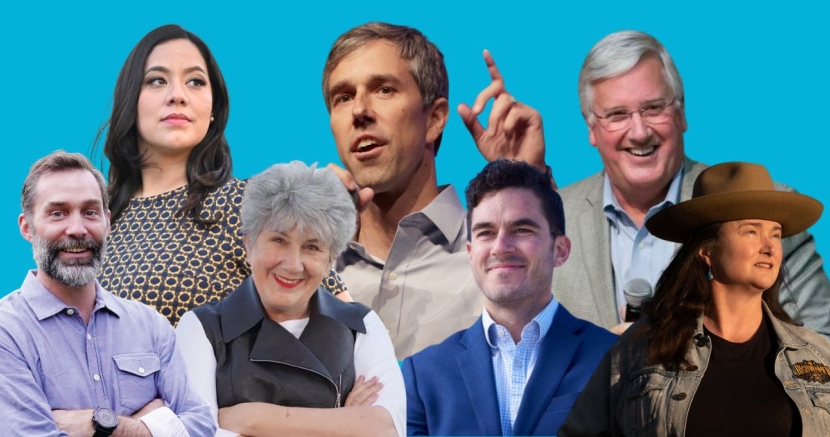 Emily Clark
Statewide Democratic candidates are outraising Republican competitors, moving up in polling, and showing up for voters.

With November approaching, statewide races in Texas are quickly heating up. From outraising GOP opponents to closing polling gaps, the success of our Democratic candidates is making the future of Texas look bluer each day.

Democratic candidate for governor, Beto O’Rourke, is only six points behind incumbent Gov. Greg Abbott according to the Texas Politics Project’s most recent poll. Another poll by the University of Houston shows only a 5 point gap between the two candidates.

These numbers are a marked improvement from previous polling. Back in April, Abbott was ahead of O’Rourke by 11 points. On top of that, coming as no surprise to us, Abbott’s unfavorable ratings are at a whopping 44%. His ratings have only worsened since April while O’Rourke’s have shown a slow but steady improvement over the last year. A less than 50% approval rating is a bad sign for any incumbent.

Polls aren’t the only numbers working in O’Rourke’s favor. He outraised Abbott by nearly $3 million during the last fundraising cycle.

Voters know Texas has more potential than is being allowed under Abbott, indicted AGl Ken Paxton, and Lt. Gov. Patrick’s authoritarian regime. Nearly 60% of Texas voters think the state is heading in the wrong direction. We’re tired of watching our governor chisel away at our rights while raking in cash from big-name donors.

While Abbott sits atop his golden throne, far away from Texans most in need (he’s been absent from Uvalde for weeks), O’Rourke has been on the ground, meeting Texas voters where they are, nearly every day since his campaign started.

Last week, O’Rourke kicked off a 49-day tour of the state, during which he will visit 65 of Texas’ counties in an attempt to restore hope to Texans and turn out the vote in November. Prior to launching the tour, he stopped by the Texas Democratic Convention to give a rousing speech on the importance of working together as the election approaches.

“The answer to this moment is action,” O’Rourke said. “It’s knocking on doors. It’s registering voters. It’s talking to our fellow Texans and bringing them into this Democracy.”

Before delivering his call to action, O’Rourke took a few moments to acknowledge that these battles we’re fighting aren’t new. Black, Brown, and Indigenous folks in Texas have fought ceaselessly for decades to achieve the most basic rights. According to O’Rourke, as Democrats, “we are the heirs to their service, to their sacrifice, and to their struggle. And what we do with this inheritance will determine our future.”

Now, it’s our responsibility to hold Republican politicians accountable for the wreckage they’ve caused. Our current governor and attorney general have inflicted harm on Texans since the moment they took office. In O’Rourke’s words:

“Greg Abbott is chaos. He is corruption. He is cruelty and he is incompetence. But he is not Texas and he is not us.”

Working Together for the Future of Texas — Democratic Convention https://t.co/aoMoWKFyg8

Of course, O’Rourke isn’t the only candidate seeing positive results. Statewide Democratic candidates are outraising their Republican opponents left and right and closing the gaps in polling.

Rochelle Garza, Democratic candidate for Attorney General, raised $520,000 compared to Paxton’s $340,000 during the last fundraising cycle. Only three points separate her from Paxton according to a recent poll.

Paxton has spent his time in office trying to overturn the 2020 election, avoiding court after his indictment for securities fraud, and dealing with his current FBI investigation. More recently, he sued the Biden Administration for trying to protect emergency abortion services. He’s an embarrassment to Texas. We need Garza to pick up his mess and bring justice and equality to this state.

Garza and O’Rourke aren’t the only big-ticket candidates excelling in polling. Mike Collier for Lieutenant Governor is a mere five points behind incumbent Dan Patrick. That’s the same difference we saw on Election Day in their 2018 matchup. Unlike then, we have four whole months to close that gap.

Progressive values are mainstream values — that’s why as voters become more familiar with the statewide Democratic candidates, they’ve gained favorability. Texas Democrats are focused on protecting our freedoms, with an emphasis on abortion access, fixing the grid, and passing common-sense gun reform. Meanwhile, Gov. Abbott and Texas Republicans seek to divide Texans with attacks on our rights.

Our statewide Democratic nominees have a chance to take Texas in a few months. It’s up to us to show up, give them our support, and hold Republican incumbents accountable for the mess they’ve made of our state.

Need to register to vote or check your status? Visit GoVoteTexas.org for more information.