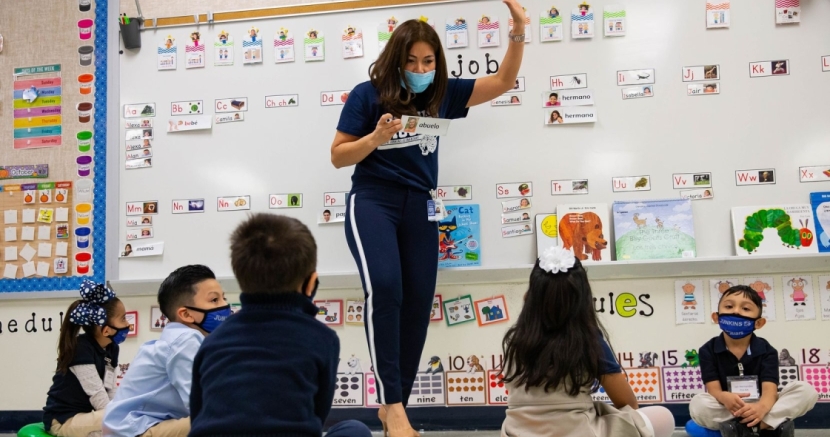 Wesley Story
The solution is not complicated: Pay teachers more and listen when they tell you what they need.

Even before the pandemic, Texas schools were struggling to staff and retain teachers due to poor treatment and harmful policies pushed by Texas Republicans. But after two years of living with a deadly pandemic, the teacher shortage has worsened.

Last week while ignoring his own culpability, Gov. Greg Abbott called for the Texas Education Agency (TEA) to create a task force to find solutions to address the state’s teacher shortage. It’s all a bit ironic when you consider the role Abbott’s played in making teachers’ lives harder and their jobs more demanding.

To make matters worse, the initial 28-member panel the TEA selected to address this issue included only two teachers, with high-level administrators filling the rest of the spots. After significant backlash, the agency announced that they were expanding the task force to have a total of 26 teachers and 26 administrators.

But even this 50/50 split feels disproportionate. Administrators may be the ones making the hiring decisions, but teachers are in the classroom every day. They’re the ones leaving their jobs in staggering numbers and they know what’s needed to keep them around long-term. Two-thirds of the Texas teachers surveyed last fall said they had considered quitting in the past year, according to the Texas chapter of the American Federation of Teachers.

This is not a problem that can be solved by just making it easier to become a teacher and hiring lesser-trained individuals; that's an extremely short-sighted solution. There need to be significant improvements made to the profession and to how our teachers are treated to improve retention and keep them in the classrooms.

When you look at everything our teachers have to deal with, it’s not surprising they’re leaving the field. It’s also not surprising that college students and those interested in the profession may be discouraged from pursuing a career in teaching, given what awaits them.

Over the past two years, teachers have had to deal with unrealistic expectations during a pandemic. Many were required to teach both online and in-person while not being compensated for the additional work. Teachers also had to risk their health and the health of their families, while Gov. Abbott refused to implement policies to protect them. Instead, Abbott used his emergency powers to stop school districts from enforcing mask mandates. And when some districts defied his orders, he sued them.

Republican politicians have also been on a mission to censor educators and ban them from teaching the truth in the classroom. They’re even banning books from school libraries that deal with issues of sexuality and race. These attacks on education can feel disempowering as lawmakers with political agendas and zero teaching experience try to rewrite history and dictate what teachers can say.

Meanwhile, there have been no steps taken to deal with an actual threat in our schools: gun violence. Instead, Abbott signed permitless carry into law, which means most Texans can carry handguns in public without going through training or having to get permits.

And now, Abbott and indicted Attorney General Ken Paxton are attacking trans kids by investigating families who love them and support them with life-saving care. Because teachers are considered mandatory reporters, they could be required to report on the loving families of their trans students.

When you add in the fact that Texas teachers are severely underpaid, schools are underfunded, and the retired Texas teachers haven't received a cost-of-living raise since 2004, it becomes clear why teachers are leaving the profession en masse. But it doesn’t have to be this way.

The solution is not complicated.

If Abbott really wanted to bring in more teachers, he would:

1. PAY TEACHERS MORE! This is the first and most important step. Average teacher pay in Texas is more than $7,000 below the national average. Teachers deserve to be compensated for their hard work, and we need to stop expecting teachers to put in long, excruciating hours without paying them for it.

2. Increase funding for schools so they can afford the resources they need to support students (instead of forcing teachers to pay for these resources out of their own pockets).

3. Secure the futures of retired teachers. For many, the current pension payments are not a livable wage. Our teachers deserve to be taken care of long after they retire from the classroom. Monthly retirement benefits haven’t grown since 2004, and they need to be adjusted immediately to reflect current (and future) inflation.

4. Put an end to education culture wars, book bans, and attacks on teaching the truth. Teachers should not be required to ignore crucial history because of the political agendas of extremists.

5. Stop attacking trans students and their families. Any teacher worth their salt knows how important it is to create a learning environment where all students feel comfortable and supported. This is impossible if certain students feel like they have to hide because they are being targeted by the state and by teachers, who are mandatory reporters and could be required to report the families of their trans students.

7. Listen to teachers and give them a seat at the table. Teachers have been calling for reform for years because they know the education system in our state is broken. They know it better than anyone, and they know how to fix it. It’s time for the state and for our elected officials to start listening to them.

This list is not exhaustive, but it would be a darn good start.