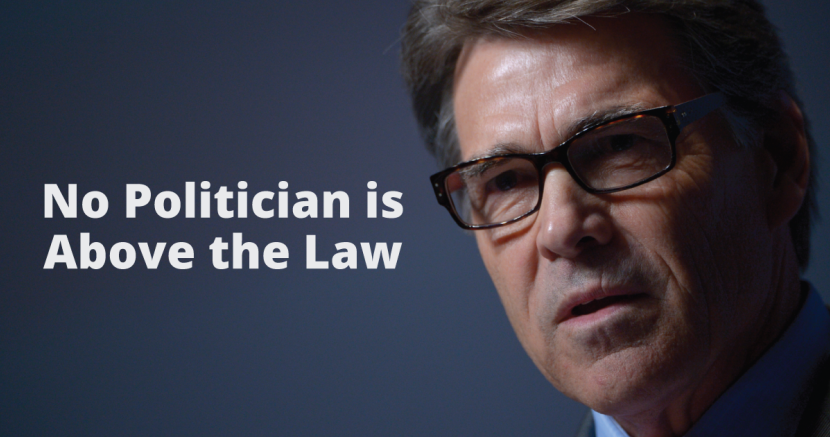 The all-Republican 3rd Court of Appeals of Texas allowed the "abuse of official capacity" indictment count to proceed.

Rick Perry is learning the hard way that no politician is above the law.

Almost one year ago, Perry was indicted by a grand jury on two counts: abuse of power and coercion of a public official.

This is the 3rd time a Republican-led court has allowed the case to proceed. In November 2014, and in January 2015, Perry's high-priced legal team lost arguments to have the case set aside.

The case continues because it's not, and never was, about the veto. It's about the bribe. No official can use public funds as a bribe to force someone from office.

Serious legal questions are at the center of the case now, as reported by the San Antonio Express-News:

In his opinion, Justice Bob Pemberton of the 3rd Court of Appeals pointed out that the case at this point turns on legal issues as opposed to the headline-grabbing facts.

“This appeal arises from an ongoing criminal prosecution that, as the district court observed, involves ‘unique circumstances’ that ‘have been widely reported, argued, and discussed by many with no standing in the case.’ Whatever the focus of such commentary, our disposition of this appeal turns on legal issues - primarily procedural in nature - that may be of somewhat less public renown,” Pemberton wrote.

Texas' Republican judges won't let Perry off the hook. Meanwhile, the indictment continues to hang over his campaign - there's a chance Perry won't even make the top 10 in the polls necessary to qualify for the first major GOP debate.

No politician is above the law. Not even Rick Perry.

Click here to read more of our extensive coverage of Perry's indictment.