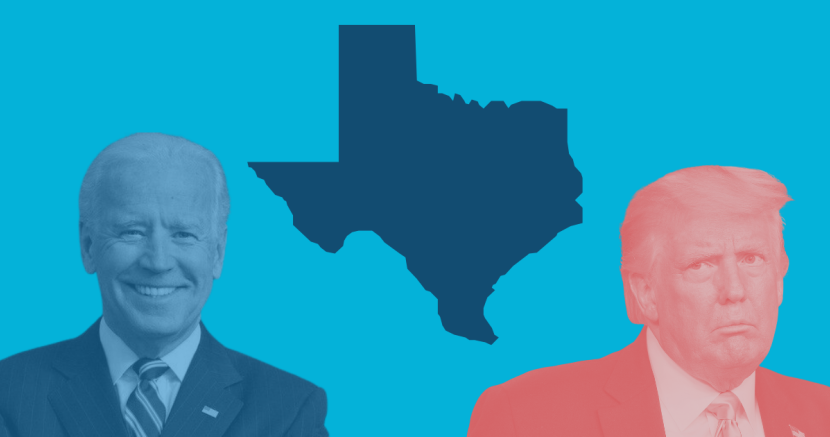 Lisa Nhan
It’s been almost five decades since Texas went blue in a presidential election. But this is the year to change that.

We’ve been saying it over and over again this election season – Texas is the biggest battleground state. But what exactly does that mean? Why do we keep repeating it?

It’s been 44 years since Texas picked a Democratic candidate in a presidential election when Texas went blue for Jimmy Carter. For the past few decades, Texas has been reliably red, but things are changing. This is the closest election we’ve seen for decades, and there’s more to gain than just the presidency.

Up and down the ballot, there are races like those for the Texas House or the U.S. Senate that could drastically change Texas politics. Here’s a look at how Texas has become the biggest battleground state for this election.

Texas isn’t a red state. It’s a non-voting state, but this has already been a historic year for turnout.

Voter turnout in Texas has long been a problem. In large part, due to the fact that Texas is the hardest state to vote in, with voter suppression being a cornerstone of the Texas GOP.

But this election, Texans are breaking voting records. In the first week of early voting, Texas led the country in turnout, with over 4 million ballots cast. Counties like Harris and Denton are setting unprecedented turnout records just a few days into early voting. As of writing this, 5.9 million Texans have already voted, 64% of the expected turnout estimated from previous presidential elections. It’s clear that Texans are ready to vote and are continuing to turn out, regardless of GOP voter suppression.

Since Clinton’s loss in 2016, the Democratic base in Texas has been growing. Hundreds of thousands of people have moved to Texas and transits from states like California and New York are bringing their Democratic votes with them. Texas' Hispanic population growth continues to surpass white population growth, with Hispanics on pace to become the largest population group in Texas. Since the 2016 presidential election, Texas has seen an increase of 1.9 million registered voters. The voting patterns in Texas are beginning to change, and that’s great news for progressives.

In 2016, Hillary Clinton lost Texas by 9 points, which was the best performance by a Democrat in decades. That same year, Democrats picked up five seats in the legislature, and in 2018 they added another 12 seats as well as Beto O’Rourke coming within three points of winning statewide. Election analysis is showing that Biden has a much better chance, as Biden either beats Trumps, ties with him, or is just barely behind in the polls. The margin is closing in, and with the historic voter surge, Biden has a better shot at winning Texas than any Democrat in decades, even better than Obama in 2008.

Biden invested $6 million in campaign ads in Texas for this election, which is far more than any other Democrat candidate has in decades, layered on top of Democratic Super PACs pledging $28 million for the Senate race and another planning $12 million for the Texas House. Jill Biden has also visited Texas to help close the gap.

The 38 electoral votes in Texas are the greatest number of any swing state. And Trump needs Texas more. Without Texas’ votes, any Republican candidate would be hard-pressed to win the electoral college.

The huge presidential effort is going to have down-ballot effects.

Presidential elections historically have the largest turnouts, which has a drastic effect on down-ballot races. And this year, it could mean big wins for Texas Democrats.

Democrats have picked up a total of 17 legislative seats in the past two election cycles, and that trend is likely to continue in 2020. Democrats are only nine seats away from flipping the Texas House, with a total of 22 seats in play. Progressive voters are determined to take control knowing how consequential redistricting will be in the upcoming legislative session.

With 22 flippable seats, the race for the Texas House is growing increasingly competitive, with Democrats outraising 10 Republican campaigns in the third quarter. Other state elections like the Texas Supreme Court give Texans the chance to protect our rights at the state level by voting blue up and down the ballot.

A Texas win for Biden means a win for democracy.

Winning Texas would likely mean a landslide victory for Biden, which could eliminate any chance of Trump casting doubt on the results and fighting for a win through the courts. Unlike other swing states like Pennsylvania, where mail-in voting could take weeks to process, a vast majority of Texans will be voting in-person. This means we could end the battle on election night with the votes of the American people, and not the votes of the increasingly conservative Supreme Court.

This is our chance to show that progressive values are Texas values. Make your voting plan at GoVoteTexas.org and join the millions of Texans ready to see change.