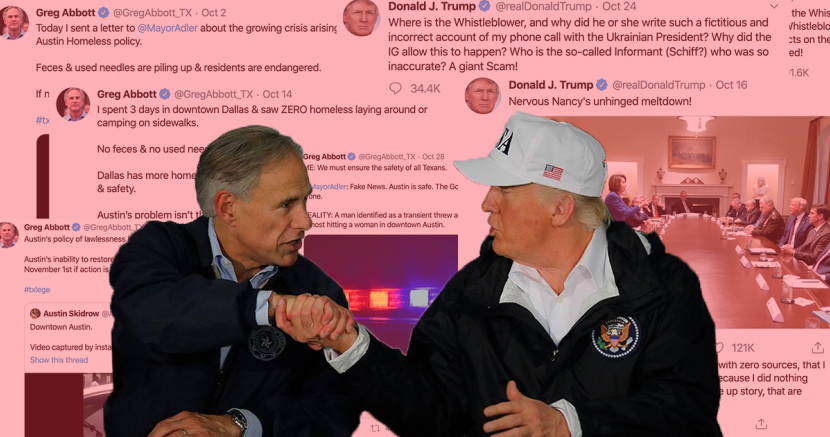 Wesley Story
Instead of focusing on the issues important to Texans, Gov. Abbott has used his Twitter to mislead the public, attack Texas cities, and fan the flames of the far-right.

People in Texas are being killed in mass shootings and have the lowest rates of health care coverage in the country, but instead of focusing on these issues, Texas Governor Greg Abbott chooses to spend his time on Twitter misleading Texans to fuel the flames of the far-right.

Though we wouldn’t recommend it, a few dives into Abbott’s personal profile and it becomes pretty obvious who his Twitter inspiration is: Donald Trump.

Abbott’s worrying approach to Twitter is seen in a couple of recent cases:

Exhibit A: Abbott’s continuous attack on local governments and his obsession with attacking Austin.

While the state of Texas is struggling with homelessness, Abbott began publicly attacking Austin City Council after members voted on a measure to decriminalize camping in public spaces in an effort to end the cycle of homelessness worsened by restrictive state policies.

Since then, Abbott has taken every opportunity he can to attack the city and Austin Mayor Steve Adler on Twitter, offering little in actual aid.

Today I sent a letter to @MayorAdler about the growing crisis arising from the Austin Homeless policy.

Feces & used needles are piling up & residents are endangered.

If not fixed by Nov.1, I'll use State authority to protect Texans’ health & safety.#txlege pic.twitter.com/KmvEtMW81T

Abbott’s rhetoric only makes things worse for one of our state’s most vulnerable populations. The truth is, Abbott is not interested in solutions. He is simply interested in partisan propaganda and bullying the homeless population.

Instead of prioritizing housing or state resources, Abbott has fueled hatred and spread misleading information about the situation in Austin.

The reality is, it’s not just Austin. The state of Texas has a homelessness problem.

Instead of attacking Texas cities, Abbott should put his money where his mouth is and provide statewide funding for solutions such as affordable housing, equitable education, and health care coverage.

Abbott recently sent the Texas Department of Transportation to clean up camps created by people experiencing homelessness. This process pushes people who are experiencing homelessness further into instability by clearing the space that many consider a home and have been using for shelter. Not only that, but it was under Abbott’s leadership that TxDOT stopped cleaning underpasses in the first place at the beginning of 2019.

No matter how hard Abbott tries, this is not an issue that can be swept under the rug by sending homeless people away from his sight. People experiencing homelessness are human beings who deserve to be treated with dignity. Texans can see past his inhuman attacks and empty promises.

Exhibit B: Abbott’s anti-LGBTQIA+ crusade and his exploitation of a 7-year-old.

In another disgusting display of partisanship, Abbott has dragged a 7-year-old into the public eye.

A custody battle over a child has become the battleground for the GOP’s fight against transgender rights, which is further hurting our LGBTQIA+ population here in Texas.

A Dallas judge recently ruled that two divorced parents should have joint custody over their 7-year-old transgender child, who self-identifies as female. (Unlike Abbott, we are choosing not to identify this child by name, to protect her privacy.)

Abbott tweeted that the situation was being looked into by the Texas Attorney General’s Office and the Texas Department of Family and Protective Services. Again, Abbott inserted politics into a matter that did not concern him. Not only that, but he exploited the child by using her name in his tweet and dragging her into this political debate.

The reality of the situation is a far cry away from what the far-right would have you believe. Abbott’s decision to post about the child on his Twitter is irresponsible and harmful to trans people in our state.

Abbott is not working for Texans.

As Texas governor, Abbott’s platform has a wider reach than the average person’s. Because of that, he has a duty to Texans to avoid spreading misleading information. But Abbott knowing does this to appeal to his base and try to justify his harmful decisions.

The question we all need to be asking is: Why is the Texas governor choosing to spend his time on Twitter becoming a far-right troll, instead of working to find real solutions to issues important to Texans?

Abbott seemingly looks for any and every opportunity to attack the people living in his own state, but doesn’t listen to real solutions to address these problems when the time comes.

How much did Abbott do during the most recent legislative session to end homelessness in our state? How concerned was he about the rights of trans people?

Abbott only gets involved in these issues when it is politically convenient for him, and instead of helping the situation, he comes in and makes it worse. He sees Twitter as a way to ramp up his base by spreading partisan dribble and hate.

It’s time for Texas to elect lawmakers focused on real solutions. And it’s time for Abbott to sign off of Twitter.