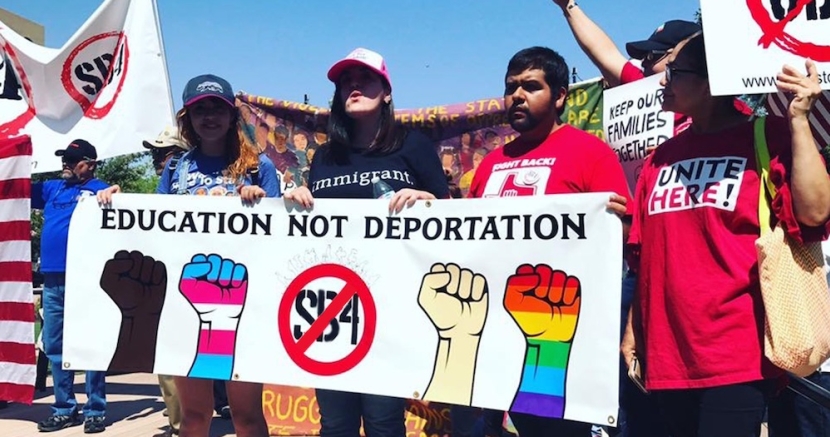 DACA recipients must be protected ahead of SCOTUS case

The Supreme Court will hear arguments in Department of Homeland Security v. Regents of the University of California this month, a case that could decide the future of DACA.

Like many immigrants here, my mother came to this country with a suitcase and a dream. And for many years, she lived in the shadows of a broken immigration system, working hard to provide for me.

Growing up undocumented wasn’t easy. For me, it meant not having a “normal” childhood. And for my family, it meant constantly trying to find a sense of belonging, and living in fear that at any moment la migra (Immigration & Customs Enforcement, or ICE) could knock on our front door, and in a second, shatter our sacrifices and dreams.

It wasn’t until 2010, after decades of failed attempts and lawyer scams, from stacks of paperwork, to invasive vaccinations, to countless photos and fingerprints, to more paperwork, that I was finally granted an interview for my green card application.

I remember nervously sitting in the desk of a USCIS officer, holding tightly a folder where I had organized letters of recommendation from teachers and classmates, along with my high school transcript detailing the perfect grades I had worked so hard for. As if almost to prove that I was worthy of an education, of a future.

Despite doing everything right and getting in the dozens of lines that we, as immigrants, are required to get into, my green card was wrongfully denied.

I sat there as the officer falsely told me at eighteen years old that my only pathway for a future in this country was to marry a citizen.

A few days later, I came home from school to find two pieces of mail: an acceptance letter to the college of my dreams, and a deportation letter telling me I had one month to leave the country.

The Deferred Action for Childhood Arrivals (DACA) program was rolled out by President Barack Obama in 2012 as an executive action, in response to the failed attempt by Congress to pass a Dream Act in 2010.

Make no mistake, DACA was not something freely given to us. It was a protection that undocumented youth like me had to fight for, and one that we won proudly in the streets.

DACA allowed for my deportation case to be dismissed in 2013, and provided me with the opportunity to continue my education and work.

Unfortunately, the biggest challenge for me and millions of other immigrants in this country is that there are some who want to make our dreams unattainable by enacting anti-immigrant policies, even though we have already sacrificed so much.​ We continue to be subject to violent immigration practices that tear our families apart and militarize our border communities.

But just because we are not citizens, does not mean we are in the shadows.

Trump’s decision to rescind DACA in 2017 was disappointing, but not surprising. Since the launch of his presidential campaign, he has led an anti-immigrant agenda, one that is amplified in Texas by our state’s leadership.

The Supreme Court will hear arguments on Nov. 12 in Department of Homeland Security v. Regents of the University of California, a case where the court could decide the future of DACA.

If DACA is found unconstitutional, it would mean I would lose my driver's license, would have to forcefully quit my job, would be held hostage without the ability to travel, and because I live in Texas, would make me a target for deportation by local law enforcement.

Texas is home to many immigrant families, in fact it's home to 17% of DACA recipients. It’s been my home for most of my life. It’s the only home I know. This is true for many of us who are here, undocumented. We are your brothers and sisters, your sons and daughters, your friends and neighbors.

Trump’s decision to treat our futures as political bargaining chips for a needless wall has resulted in the deportation of many immigrants and created a new class of Dreamers without DACA protections.

But it also mobilized a generation of unafraid, unapologetic, undocumented youth who are ready to fight for the rights of our families and our communities.

I’m proud to be joining millions of immigrants and allies who are organizing countless school walk-outs and community-led actions this week to send a loud a clear message to the Supreme Court and those in elected offices: This is our home and we’re here to stay.

This fight isn’t just about DACA. Some immigrants never qualified for DACA, and many others were too young to apply for the program.

It’s time for Congress to take action and pass legislation that will permanently protect 12 million undocumented immigrants like me from deportation, without separating our families and needlessly militarizing our border communities.

I, and my undocumented sisters and brothers, together with citizens of this country who are outraged at our treatment, will continue to fight this racist agenda every step of the way.

We will own our power in 2020 by working to assure that we turn out as many like-minded citizens as we can find to exercise their precious right to vote, holding to account the elected officials responsible for anti-immigrant laws like Texas’ SB 4 and others.

To say we are not Americans is to say we are different. But we live in the same communities, we go to the same schools, and more importantly, we have a common dream.

Claudia Yoli Ferla is a Dreamer and dedicated community activist born in Venezuela and raised in El Paso, TX. As the Co-Executive Director of Deeds Not Words, she advocates on behalf of young Texans everywhere looking to find their voices to affect change in their communities.