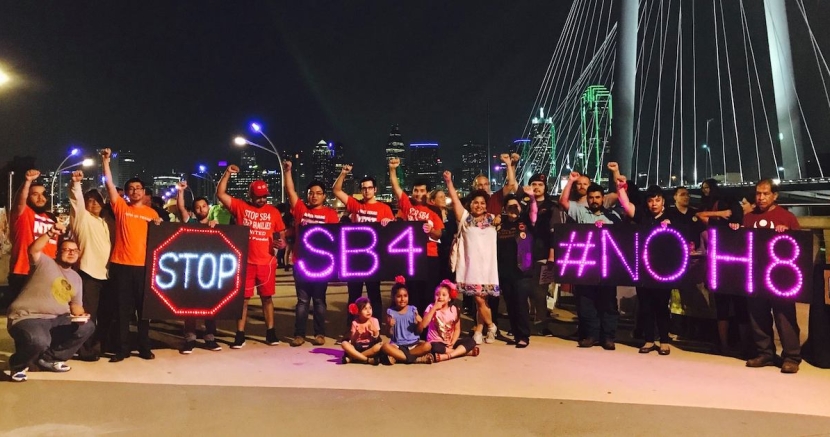 Explainer: The ongoing impact of SB 4 on Texas immigrants

Photo by Julio Acosta
Though it was passed two years ago, Texans feel the effects of the anti-immigrant SB 4 on their health care, education, and everyday lives.

The era of Donald Trump has created a chain reaction of several bills, motions, and conversations throughout the nation targeting immigrants and impacting Texans of all backgrounds.

The Passage of SB 4

“When you see what transpired as the state of Texas was voting on the bill…  it was obvious that the impact was to racially profile and target Latinos and Latino immigrants,” Dallas-Fort Worth organizer Mariela Nuñez-Janes said.

The bill began as a tactic to ban sanctuary cities and pull funding from any state institution that did not comply with federal immigration laws.

"SB 4 came out of a promise and a threat," Nuñez-Janes said. “The threat was that 'we are going to pull out funding from any university from the state of Texas that becomes a sanctuary campus, and Abbott ran on that promise for reelection."

This law allows for racial profiling and permits officials in most public spaces to inquire about immigration status. It empowers normal police officers to act as border patrol agents. There does not have to be a lawful arrest. There does not have to be any real reason to ask for someone to prove their citizenship. The only places exempt from this are places of worship.

In 2017, Dallas had the most Immigration & Customs Enforcement (ICE) arrests in the nation. Numbers of ICE arrests rose in North Texas, despite it being hours away from border patrol homestays in South Texas. It is obvious the negative rhetoric around immigration emboldened local authorities.

It’s been two years since the emotional passing of SB 4 and although conversation around it has quieted, its impact is still loud.

Sasha Vargas, 21, grew up in the Rio Grande Valley with an undocumented mother. Her mother received her citizenship when Vargas was in middle school, but she said the fear of authorities is simply a part of the culture of South Texas.

"Do you know how many parents don’t go to schools in the Valley because they're scared?" Vargas asked. "Like at elementary schools, they don't see their kids programs and stuff like that because they're fearful. And the amount of pressure they put on their children to not say anything [...] that's a lot for a kid to endure.”

Vargas said this fear is common in the Valley. Texans won’t go to the doctor, schools, or many public places to receive help because they don’t know who they can trust. She said this has created a sad cycle which keeps these vulnerable communities vulnerable.

"People always say it's toxic [in the Valley], but it stems from somewhere and it stems from fear where people aren't able to grow and break those generational chains," Vargas said. "It's because it feels like there's no resources to help them get out of it."

Nuñez-Janes said that is exactly what SB 4 was trying to do: push these communities further into the shadows. SB 4 was intended to cause harm.

The truth is: SB 4 does not only impact immigrants. It impacts all Texans.

The New York Times reported that between 2004 and 2018, ICE requested the detention of almost 3,000 American citizens.

"The implications on U.S. citizens, the children of undocumented immigrants, also feel the effects of these laws,” Nuñez-Janes said. "SB 4 has served to legitimize the profiling of brown people. It's not so much about status, it's about race."

Zeferino Ramirez, 22, is a part of a family of immigrants. Even though his family has documentation now, he said the fear even with papers is growing.

"They're afraid that they are also going to get wrapped up in that wide net that they are throwing, because the net has been getting wider," he said.

What can Texans do?

Julio Acosta, a DFW organizer involved with the North Texas Dream Team and Faith in Texas, said there needs to be organizing happening right now for the 2021 Texas Legislative Session to repeal SB 4.

"We definitely need to organize for November 2020 election in making sure repeal of SB 4 is an election topic, and we need to get candidates on the record saying, ‘Yes, I will vote to end SB 4,’" he said. "All of that groundwork needs to be done, like now."

Ramirez remembers when SB 4 was being passed because he had family members just moving to Texas due to safety issues in Mexico, so it was something they had to contend with. Ramirez said the removal of SB 4 is something we all should put our effort behind.

"It's not our place to speak for [undocumented Texans], but it is our responsibility to make sure they are comfortable again," he said. "It's a much bigger ask and a much higher risk to ask them to come out [and do it for themselves], so it's important for us not in vulnerable positions to make sure those people in vulnerable positions are protected and feel protected."

Our next step those of us who have the privilege of visibility and agency, is to get our local candidates talking about the repeal of SB 4 and make it a real talking point for the upcoming election.

We have not forgotten and we must make politicians who say they want to represent us remember.

And when the legislative session of 2021 happens, we must hold them accountable.