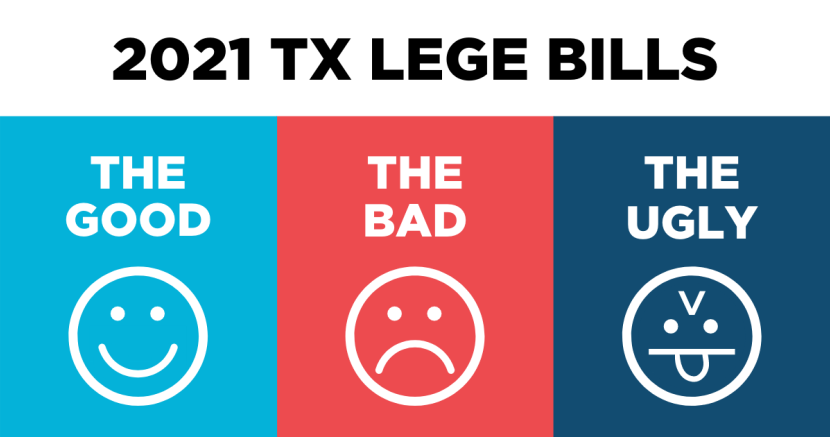 Here at Progress Texas, we’re going through every bill filled in the 2021 Texas Legislative Session. Some are good, some are bad, and others are downright ugly.

Every two years, the Texas Legislature convenes for session. This 2021 legislative session is already vastly different as the coronavirus continues to change the everyday lives of Texans. While the session doesn’t officially start until January, pre-filing began in November.

We read the bills so you don’t have to! Even though how the session convenes may change due to COVID, it’s still expected that thousands of bills will be filed. Here at Progress Texas, we’re tracking them ALL for you. We’re focusing on bills we feel are the most relevant to the progressive movement. Some of these bills can help build a stronger Texas, while others pose threats to many of the rights we hold dear.

The deadline for legislators to file bills is March 12, 2021. As the session begins and filing comes to a close, we’ll continue to update this list.

Progressive issues are mainstream issues — even in Texas. And as our state’s population grows, the progressive wave has been growing with it. Here are some of the bills filed so far that will bring us closer to a more equitable and just Texas. The bills have been divided by key issues.

This bill, filed by Rep. Celia Israel, would allow Texans to be able to complete a voter registration application online through a state official website. This would allow applicants to print, sign, and mail their application to the registrar.

Rep. John Bucy’s bill would expand early voting by mail for any qualified voter who fills out an application.

All filed by Rep. Jessica González, these bills would help expand the accessibility of early voting and voting by mail. HB 479 would allow for the electronic submission of applications to early vote by mail. HB 481 would expand the number of counties that must have early voting for at least 12 hours on each weekday during the last week of the early voting period. HB 482 would change the deadline for returning a ballot by mail to no later than the fifth day after the election.

These bills, filed by Rep. Jarvis Johnson and Sen. Nathan Johnson, would abolish Confederate Heroes Day as a state holiday.

These two bills would be known as the George Floyd Act if enacted. The bills are a sweeping police reform proposal that would ban chokeholds across the state and require law enforcement officers to intervene or render aid if another officer is using excessive force while on the job.

This bill, filed by Rep. Nicole Collier, would expand the definition of legal sexual assault without consent. This expanded definition would help give more power to survivors if they choose to pursue prosecution.

Rep. Harold Dutton and Sen. Eddie Lucio’s bills seek to end the use of capital punishment in Texas and abolish the death penalty.

Filed by Rep. Celia Israel, this bill aims to ban juvenile curfews. The effect of these curfews falls disproportionately on BIPOC youth in Texas, so banning them could help ensure more equitable criminal justice practices.

This bill authorizes the issuance, possession and cultivation of cannabis for medical purposes.

This bill, filed by Erin Zwiener, would help the marijuana decriminalization effort. Possession of small amounts would result in a ticket and small fine rather than an arrest or other more serious criminal offenses.

Rep. Joe Moody’s bill is so far the most progressive marijuana legislation filed. It legalizes the use, transport, and growing of marijuana for Texans over the age of 21. It also provides a framework for the cannabis business in Texas, by creating licensure and distribution procedures.

These bills, filed by Rep. Ron Reynolds and Rep. Rhetta Bowers, would prevent racial discrimination based on hair texture or protective styles associated with race in the workplace or schools.

With Rep. James Talarico’s bill, funding for social-emotional learning programs would increase by expanding the compensatory education allotment. These funds would also be used to help provide child-care for students at risk of dropping out.

Under Rep. Ana Hernandez’s bill, certain individuals who are homeless would be exempt from paying tuition and fees at public institutions of higher education.

This bill, filed by Rep. James Talarico, would work toward placing a monthly cap on the price of insulin and insulin supplies.

Filed by Rep. Donna Howard, this bill would create a women’s health advisory committee which could focus on helping women’s health programs across the state.

Rep. Donna Howard’s bill would help to prevent workplace violence in certain health care facilities. Under this bill, a committee will create, adopt, and enforce a workplace violence prevention plan, including a way to protect those who come forward with information.

Under Rep. Celia Israel’s, Rep. John Bucy’s and Sen. Nathan Johnson’s bills, the eligibility for Medicaid would expand by providing medical assistance to all persons who apply for the assistance and who are eligible under the Patient Protection and Affordable Care Act, with certain exceptions. This would be estimated to expand eligibility to over 2.2 million Texans.

This bill, filed by Rep. Joe Moody, would allow workers’ compensation benefits for nurses who suffer from coronavirus, which results in death or disability, and are presumed to have contracted it during the course and scope of their employment.

With Rep. Terry Canales’ bill, employers would be prevented from collecting or receiving “any portion of a gratuity paid to or left for a tipped employee.” It would make the gratuity left the property of the employee who was tipped.

With Rep. Leo Pacheco’s bill, the minimum wage in Texas would be raised to $12 an hour.

Certain state employees would be given the opportunity to work flexible hours, from home, or other authorized alternative work sites, under Rep. Celia Israel’s bill.

Filed by Rep. Celia Israel, this bill would deem attempts to change the sexual orientation of a child by mental health professionals as unprofessional conduct.

This bill, filed by Sen. Nathan Johnson, would eliminate gender-specific terminology in statutes related to the rights and duties of spouses or parents. The bill would help ensure same-sex marriages and parental relationships would be included in family code provisions.

Unfortunately, the Texas legislature isn’t always a place for progress. Historically, the Texas Capitol has seen and passed bills with regressive policies that don’t always serve in the best interests of our vastly diverse populous of 29 million. Here are bills that threaten to pull us back instead of push us forward.

These bills, filed by and backed by multiple Republican representatives, would prohibit the distribution of an application form for an early voting ballot. It would prevent officials from giving mail-in ballot applications if voters didn’t submit a request.

Filed by Rep. Matt Shaheen, this bill would prevent those who have been convicted of a felony offense from being a poll watcher.

Rep. Drew Springer’s bill set guidelines for the removal, relocation, alteration, or construction of historical monuments and sets civil penalties for violations. It seeks to have these changes approved only by the legislature, even for alterations for historical accuracy. This bill is likely a result of the debate over confederate monuments in our state and the goal of the bill is to make it harder to have them removed.

This bill, filed by Steve Allison, would increase the criminal penalty for damaging or destruction of public monuments.

Also filed by Rep. Matt Shaheen, this bill aims to make places of worship and religious activity “essential,” meaning they could not be shut down due to COVID precautions or other future states of disaster.

Some of the most notorious bills in America come from the Texas Lege. If you can remember the bathroom bill, the “sanctuary cities” law, or the sonogram law, then you know what we’re talking about. Texas conservatives have a history of misplaced priorities to say the least.

While we’re hopeful that this year will be different, we’re already seeing bills filed that show cause for concern. And that’s why it’s crucial that Texans stay informed and pay attention to what’s happening in the upcoming session.

This bill would allow state-owned public buildings, that would otherwise prohibit firearms and weapons on the premises, to allow for the storage of self-service weapons and firearm lockers.

This bill would effectively ban abortions at 12 weeks of pregnancy, revising the current state law which prohibits abortions after 20 weeks.

This bill attempts to create civil and criminal penalties in regards to performing abortions. If it were to go into effect, a person involved with what the bill considers to be a “criminal” abortion could be subject to a lawsuit by the Texas Attorney General for a $30,000 civil penalty fee for each “violation.”

All these bills were filed by Rep. Briscoe Cain, under the guise of preventing nonexistent "voter fraud." They include creating criminal offenses, increasing criminal offenses, and creating a database of non-citizens in Texas. Yet, there has been no evidence of widespread voter fraud in Texas or any evidence to suggest that non-citizens have been voting in elections. It’s clear to us that these bills are the latest in a series of Texas conservatives' attempts to spread misinformation and disenfranchise voters. Texas is already the hardest state to vote in, and these bills would make it even harder.

Stay tuned for our coverage of the 2021 legislative session. We will be closely following these bills and helping to keep you informed on what exactly is happening inside the Texas lege.

To look at an updated list of bills filed for the 87th Legislature, go to the Texas Legislature Online at capitol.texas.gov.

Think we missed a bill? Let us know at wesley@progresstexas.org.