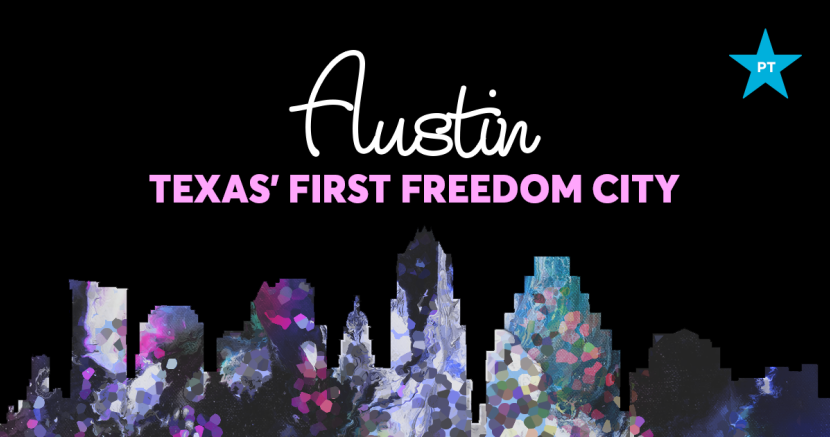 Wesley Story
Austin City Council voted unanimously to make Austin a ‘Freedom City’ after more than 100 Austinites testified in support of making the community safer for immigrants and people of color.

Austin will become the first ‘Freedom City’ in Texas after Austin City Council voted unanimously in favor of Resolutions 73 and 74. The two ‘Freedom City’ resolutions target racial disparities in Austin police arrests and guide how law enforcement should interact with immigrants.

Data released from Austin Police Department showed that immigrants and people of color were disproportionately arrested and charged for misdemeanors when left up to the discretion of police. In response, a coalition of grassroots organizations and Austin City Council member Greg Casar introduced the ‘Freedom City’ resolutions to make the Austin community safer for immigrants and people of color.

People of color and immigrants in Austin are overrepresented in arrests, jailings and removal from the community.

Under state law, there are two kinds of discretionary arrests.

Class C misdemeanors, such as traffic and ordinance violations, are “nonjailables.” This means jail is not mandatory. These violations can be addressed by giving the violator a ticket and sending them on their way.

Several Class B misdemeanors, such as possession of small amounts of marijuana and driving with an invalid license, can also be addressed with a citation instead of arrest/booking.

According to a summary of APD’s 2017 discretionary arrest data, however, when left up to the discretion of police, officers arrested black residents at double the rate of white residents.

Black and Latinx residents made up almost 75% of discretionary arrests for driving with an invalid license in 2017, but make up only 45% of Austin’s population. Austin police were also seven times more likely to arrest Black residents for possession of small quantities of marijuana than white residents, according to the data.

Resolution 73, the first of the two resolutions passed, directs the City Manager to work with the Police Chief to eliminate the use of discretionary arrests for non-violent misdemeanors where state law allows and when feasible, such as the possession of a small amount of marijuana. Instead, in these circumstances, police would issue citations.

In an effort to protect immigrants from Senate Bill 4, Resolution 74 requires police to inform individuals of their right to deny requests for immigration papers.

Texas Republicans passed the racist, anti-immigrant “show me your papers” bill, SB 4, during the last legislative session to prevent cities like Austin from protecting their immigrant communities. SB 4 forbids local entities from adopting policies that prohibit officers from asking about an individual’s immigration status.

How will these resolutions be enforced?

In addition to the guidelines stated above, the policies require full vetting and reporting on requests by Immigration and Customs Enforcement (ICE) for APD resources, and require officers who ask about immigration status to complete a report explaining the encounter.

The resolutions also call on city leaders to track when, where and why discretionary arrests are made.

If not for the work of progressive organizations in Austin and throughout Texas, the resolutions may not have gained traction.

Casar authored the bill, but had support from key progressive Texas organizations. United We Dream, Grassroots Leadership, and Workers Defense Project all helped lead the effort to make Austin more inclusive and equitable.

In addition to these organizations, Austinites showed up in droves to rally outside of Austin City Hall in support of the resolutions and more than 100 people testified in favor of the proposal.

Austin has taken an important first step in making the city more equitable for immigrants and people of color, however, the racial disparities seen in the arrest data are not Austin specific. In many cities in Texas and across the nation, the statistics are just as bad, if not worse. Because of this, some cities in Texas have already began working toward similar proposals.

Thursday’s vote is a victory that will hopefully be the first of many in Texas as other cities throughout the state join Austin in taking steps to ensure that every resident is safe and free from unjust arrests and questioning of their immigration status.