Another reason to vote him out: Cornyn doesn’t support the impeachment inquiry 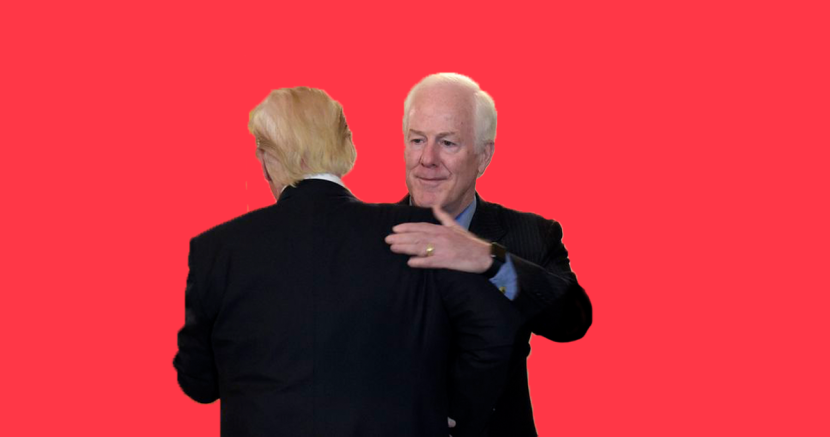 With the impeachment inquiry in full swing, our Texas lapdog U.S. Senator John Cornyn is remaining loyal to Donald Trump.

We’ve known Cornyn hasn’t had a spine for quite some time, so this comes as no surprise. It’s clear from the company he keeps that he is more interested in staying in power and lining his pockets than he is listening to constituents.

When it comes to the impeachment inquiry, we need both Democrats and Republicans to support the search for truth and justice, and that includes Cornyn.

Trump’s been a party to a lot of bad things; meddling in an FBI investigation, paying off Stormy Daniels, seeing his campaign manager go to jail, and the list goes on. But this time is different. Trump got caught by intelligence officials breaking the law and using his position as president for his own personal gain.

Not only is it Cornyn’s duty to uphold our laws, but by not holding a president who breaks the law accountable, he and the rest of the Senate would be setting a dangerous precedent.

A majority of Americans support not only the impeachment inquiry, but removing Trump through impeachment. Cornyn has no reason to not support the inquiry.

But yet, here we are.

And here we have Senator @JohnCornyn admitting that he would allow Trump to get away with anything.

It's refreshing to see Cornyn so open about his position as Trump's lap dog.

The fact that Cornyn stands so firm in his support of Trump is yet another reason why our 17-year senator must go in 2020. And we’re not far from making that goal a reality. Cornyn is unknown and unliked in Texas, and has regularly polled lower than Ted Cruz.

We have plenty of Democrats and progressives lining up to represent the needs of Texans in the U.S. Senate. The truth is we don’t need a lap dog, we need a senator.

If this isn’t enough to make your skin crawl, check out 10 concerning things Texans should know about John Cornyn – Texas’ other US Senator.