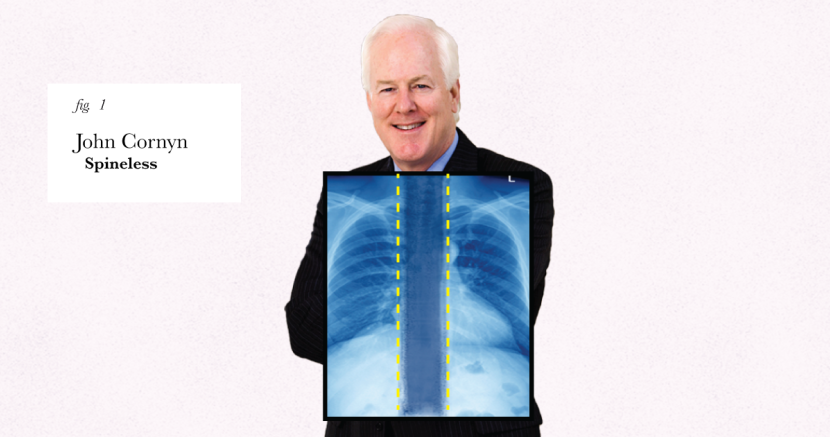 Mark Corcoran
At this point, is there any form of bigotry Senator John Cornyn won't support in the name of his party?

Tragically, when asked about his endorsement in the face of these comments, Cornyn’s spine immediately imploded.

Cornyn: “I don’t have to agree with somebody to support them over the democratic nominee. I support the nominee of my party.”


RE: Roy Moore saying @keithellison should not be allowed to take congressional oath because he’s Muslim:

Cornyn: “I have disagreement within my own family, doesn’t mean I care for them any less, so I support the nominee of my party.”

Even the reliably conservative Dallas Morning News Editorial Board called out Cornyn, saying he “betrays himself and his party with [the] embrace of Roy Moore.”

Sen. John Cornyn’s endorsement this week of Roy Moore for the U.S. Senate from Alabama is a new low not just for the former jurist and ex-Texas attorney general, but for the party he claims to love.

We had hoped, as many have, that Cornyn would stand against the tide of populist, nativist and exclusionary politics that have come to dominate the Republican Party in Texas and elsewhere. That hope has now been all but extinguished.

What will remain of a Republican Party whose leaders are so desperate to preserve its power that they cozy up to a Senate candidate like Moore?

Cornyn may find that soon enough the party he seeks to preserve will no longer be one he recognizes.

Brutal. It's no surprise that John Cornyn has the support of an abysmal 28% of Texans.