After Texas’ month-long block, what does abortion care look like during COVID-19? 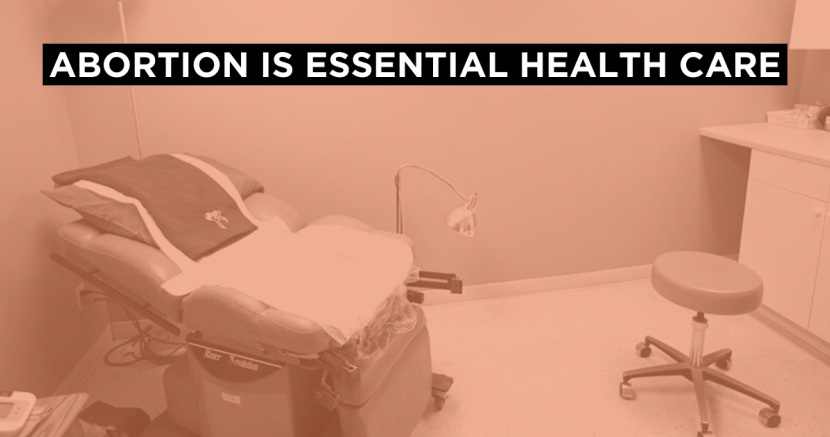 Paige Alexandria
A global pandemic is not the time to restrict access to time-sensitive and essential health care, and yet, that’s exactly what Gov. Greg Abbott and indicted-AG Ken Paxton did when they blocked most abortions in the state, denouncing it as non-essential.

For a month this year, abortion care was largely inaccessible for everyone in Texas – the first time it had been blocked since Roe v. Wade was established in 1973.

Over the course of March 22 through April 1, attorneys and providers challenged the erroneous GOP-led assumption that abortion is “medically unnecessary” and “requires too much personal protective equipment (PPE)”. Republicans’ reasoning was only a smokescreen used to further the state’s long-standing agenda to prevent Texans from having abortions.

Dr. Bhavik Kumar, Medical Director of Planned Parenthood Houston, said that their clinic had to cancel hundreds of appointments over the course of that month.

“There were times when patients in our health centers were ready to sign consent forms or were just about to take the first medication (mifepristone) in the medication abortion process, and a legal ruling would force us to abruptly stop and send them home, still pregnant,” Kumar said. “Our patients expressed feelings of anger, frustration, and fear. When we were forced to turn them away or when we had to call to cancel appointments, patients would inevitably ask us, ‘Where can I go? What can I do? When can I get care?’ They were anxious, afraid, and desperate to not be pregnant — and we didn’t have all the answers they needed.”

Most Texans seeking abortions with pregnancies over ten weeks were left with no choice in the matter at all. They either had to risk their health by traveling across state lines during a pandemic — after already experiencing other devastating impacts from the pandemic, like lost wages from unemployment — or wait until the ban was hopefully lifted.

Whole Woman’s Health, which has clinics in McAllen, Austin, and Fort Worth, estimates 5% of their patients traveled to get an abortion while the bans were in effect, emphasizing that most people experienced significant barriers in doing so.

“Most people, even in normal times, simply cannot travel hundreds of miles for an abortion – taking off work, arranging childcare, arranging transportation and hotels. And this is even more dire in the middle of a pandemic where travel advisories are out there banning people from flying, hotels are closed, and folks are under shelter in place orders to stay at home,” said Amy Hagstrom Miller, President & CEO of Whole Woman’s Health & Whole Woman’s Health Alliance. “Sadly, most people just had to wait, forced to carry a pregnancy for a month or even longer, against their will.”

At Whole Woman’s Health, over half of the patients seen throughout the year need medication abortions, and that didn’t change during the pandemic. On average, the three clinics managed by Whole Woman’s Health “provide about 170 abortions a week, with about 50% of those being medication abortions,” so the implications of the block led to over half of their patients being unable to access the surgical abortion they needed.

Miller said it has taken longer to see patients as a result, but they aren’t limiting the number of patients seeking abortion care, and are prioritizing folks who are close to the gestational limit in Texas.

If the state lifted the 24-hour waiting period restriction that forces Texans to have two separate visits, it would reduce unnecessary exposure to COVID-19 and decrease wait times for patients as they work through the waitlist of folks still needing care.

“We were fielding a high volume of calls from desperate people and we worked hard to get them the care they deserved,” Miller said. “Sadly, over half of those callers were not eligible for medication abortion care as they were 10 weeks or more into their pregnancies. We had to cancel hundreds of appointments during the 21-day period that the administration was enforcing this abortion ban, and now we are working hard to get those patients cared for, along with the additional patients who are calling for new appointments.”

From a clinical standpoint, the pandemic has shifted the way abortion care looks even before the Texas block, and safety protocols are still in place today to limit the spread of illness.

For patients, this means they can’t bring a support person with them to the clinic and may have to wait in their car to adhere to limited waiting room capacities, and some staff are navigating a new landscape by providing certain services through telehealth.

“[At Planned Parenthood], we halted other in-person services due to the pandemic so we could enact social distancing, and to comply with the Governor’s executive order restricting in-person visits, reduced capacity, and other safety measures to reduce potential transmission,” Kumar said. “But we have always been ready to safely provide essential and time-sensitive health care, including abortion, in our health centers. While we now offer much of our care — including primary care, gender-affirming hormone therapy, birth control, and more — virtually through telehealth, today we are also able to safely see more patients in-person for other needs.”

Whole Woman’s Health has limited the number of people that come into the building to ten — defining that “conservatively” to include both patients and staff. To reduce the risk of transmission of COVID-19, they’ve temporarily stopped training staff and residents, and no longer allow a support person to accompany patients inside the clinic, except in unique situations like a minor and a parent, or if someone requires a translator to provide informed consent. Whole Woman’s Health has also implemented a “voiceover IP remote appointment booking system” and have transitioned staff to work from home.

As a result of the abortion block in March and April, Planned Parenthood Houston opened and closed a total of eight times, and because of this, “there was certainly a backlog of patients on the waiting list for abortion care,” Kumar said.

And like Whole Woman’s Health, the staff at Planned Parenthood did their best to “prioritize those approaching the state’s legal gestational limit,” which, apart from medication abortions, were the only exception permitted under the ban for people needing surgical abortions.

“With the pandemic, we have had to implement safety measures that reduce capacity in our health centers, so our ability to provide care looks different today,” Kumar said. “Many of the patients who were waiting were able to come in for care. However, there were a number of patients who we didn’t hear back from. As a physician, it is extremely frustrating losing patients who were seeking my help, and now I don’t know what happened to them or if they’re okay. I hope they were able to get the help they needed, but I know that some were probably not able to.”

So what does the future hold for Texans seeking abortion care?

Patients are already forced to navigate a web of unnecessary restrictions designed to trap and delay people from getting the care they need. And although exploiting a global pandemic to enforce an extreme anti-abortion agenda was certainly a new low, it’s something we’ve seen before through their continued efforts to ban safe and legal abortion.

In the 2016 case Whole Woman’s Health v. Hellerstedt, providers and attorneys with the Center for Reproductive Rights successfully challenged Texas HB2 after the legislation had been in effect for three years — increasing wait times and costs for people seeking abortions. It caused over half the clinics in Texas to close, and although it was overturned four years ago, concerns have been raised that the impacts of the COVID-19 block may mirror the long lasting implications of HB2, despite it no longer being in effect.

“We are constantly fighting to keep our doors open, and we have a really strong commitment to be available and affirm that abortion is essential health care,” Miller said. “And we feel strongly that contraception needs to be available during the pandemic, so people aren’t faced with unplanned pregnancies at the same time they’re losing their job. It’s always important for people to have access to [abortion] early in pregnancy, and it’s even more important during a pandemic.”

Kumar said that although their tactics may change, it’s clear that Texas Republicans want an outright ban on abortion.

“Planned Parenthood is absolutely committed to providing this essential, time-sensitive health care no matter what, and we will never stop fighting to protect our patients’ right to access it,” he said. “We remain committed to working with other abortion providers and advocates, public health providers, hospitals, and organizations to serve Texans in every way we can during these uncertain and unsettling times. We know that this isn’t the last fight we’ll wage to protect access to abortion, but we’ll do it every time. Our doors stay open.”