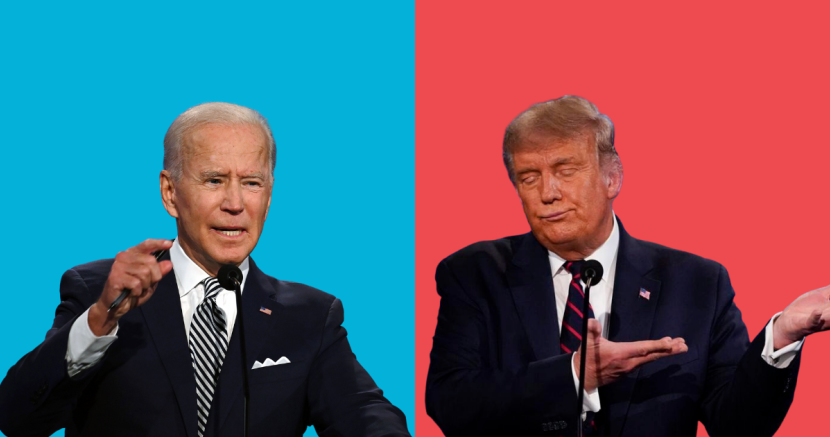 Wesley Story
Biden has a plan to address the biggest issues impacting Texans. Trump does not.

Tuesday’s debate marked the first of three scheduled presidential debates for this election season. Anyone who tuned in knows that the debate was a train wreck. Trump refused to follow the rules and instead chose to childishly talk over Joe Biden and argue with the debate moderator Chris Wallace.

While it was difficult to find value in the debate, there were a few important moments Texans should pay attention to. Many of the issues “discussed” have a direct impact on those living in our state. It says much about the candidates that one tried to have a meaningful conversation and talk about his plans, while the other opted for chaos and disinformation.

Here are our biggest takeaways from last night’s debate:

1. Texas has the highest uninsured rate in America, and Republicans are trying to take away health care in the middle of a pandemic.

Biden starts the debate by calling out Trump for currently trying to strike down the Affordable Care Act and steal healthcare from millions of Americans. #Debates2020

Texas Republicans are currently leading a lawsuit to end the Affordable Care Act. The Supreme Court is scheduled to hear arguments for the lawsuit the week after the election. If Republicans are successful, millions of people would lose health care coverage, and protections for people with preexisting conditions would be taken away. Texas already has the highest uninsured rate in the country, and a decision like this would be devastating.

Trump kept denying this was the case because he knows it’s a losing issue. But it is a fact, and it is also true that Republicans currently have no replacement plan in place. Biden, on the other hand, has a detailed health care plan that he only got to talk about briefly due to all of Trump’s interruptions.

2. Texas is getting ravaged by hurricanes. Biden wants to act immediately on climate change, Trump wants to sweep forests.

Joe Biden outlined a real climate change proposition and plan. Climate change is the greatest issue we are faced with as a people and Trump refuses to even acknowledge it’s existence. If you’re concerned about the economy - you won’t have one if you don’t have a healthy Planet.

Texans understand better than most the devastating impact climate change has on our lives as Hurricanes Harvey, Ike, and Beta are all household names here. We are already experiencing a climate crisis, and it is only going to get worse if we do not act now. Biden understands this. He knows that we’re spending billions of dollars already in response to climate disasters and that we need to be proactive to create jobs and lessen the harm. Trump, on the other hand, won’t even admit that climate change exists and his plan is to sweep the forests.

3. America is struggling with racism and Trump still refuses to denounce white supremacists.

Donald Trump is a white supremacist.

People have been warning about this for a long time.

They were ridiculed, called hyperbolic & radical - not bc they were wrong, but bc others couldn’t accept that our country elected a supremacist as President.

This is fascism at our door. https://t.co/sahloCJt25

In one of the most distressing moments of the night, Trump refused to denounce white supremacists and hate groups. Instead, when asked by Chris Wallace to condemn them, Trump said “Proud Boys, stand back and stand by.”

Not only did Trump refuse to denounce white supremacists, but he gave a far-right, neo-fascist, violent organization classified by the FBI as an “extremist group” a new slogan. Trump has a long history of refusing to condemn white supremacists, so the moment was not necessarily shocking. But, it says a lot about Trump that when given the direct opportunity in front of millions of Americans to denounce the group, he chose not to. If you weren’t already convinced, maybe now you’ll believe us when we say that TRUMP IS A WHITE SUPREMACIST.

4. With the SCOTUS vacancy, our rights are most definitely on the ballot.

Justice Ruth Bader Ginsburg was a tireless advocate for equality. She pushed our country forward on important issues that impact Texans such as abortion rights, gender equality, immigrant rights, and more. If appointed to the Supreme Court, Trump’s nominee Amy Coney Barrett, along with the Court's conservative majority, would reverse the progress our country’s made advancing civil rights.

Biden wants to honor Ginsburg’s memory and the will of the people by letting voters decide who will be in charge of replacing her on the Court. But if Trump and Mitch McConnell have it their way, they’re going to shove the nominee through the confirmation process before Election Day so that she can sit on the Supreme Court and potentially rule on important decisions regarding election results.

5. Voting by mail is safe and secure.

We need to OWN election season. #Debate2020

Trump has spent the past few months using every opportunity he can to cast doubt on this election and mail-in voting. But the fact is, voting by mail is safe and secure. There is no evidence to support Trump’s claims of rampant voter fraud. Trump, along with his fellow Republicans, is trying to suppress voters. This is an issue Texas voters are all too familiar with, as we consistently grapple with barriers put in place by the Texas GOP to suppress our vote. Biden, on the other hand, encourages everyone to get out and vote, and wants to make voting more accessible for communities that have historically had their votes suppressed.

More than 200,000 Americans have died from Covid-19 and President Trump is still casting doubt about the effectiveness of wearing a mask – and mocking Democratic nominee Joe Biden for doing so himself. #Debates2020 https://t.co/085ZKO77ki

More than 200,000 Americans have died due to COVID-19, and researchers project almost 180,000 more will die by the end of the year if we continue on this path. Trump refused to show any empathy for those who’ve died and their families and friends who have suffered loss. Instead, he continued to pat himself on the back.

Biden, on the other hand, looked into the camera and tried to speak directly to Americans on this issue. Biden has a plan for getting Americans out of the COVID-19 pandemic and restoring some semblance of normalcy to our lives. He actually takes this pandemic seriously, and has the emotional intelligence necessary in a leader to understand the devastating impact this disease has had on so many.

7. Biden knows what it’s like to have a family member dealing with substance abuse.

Biden looking directly into the camera to say how proud he is of his son in recovery is the kind of clip that might seem insignificant in the grand scheme of things — but for anyone who loves one of the 20 million Americans with substance use disorders, wow oh wow what a moment.

Trump attacked Biden because his son, Hunter, had a battle with drug addiction in the past. Biden responded in the best way possible. He said he is proud of Hunter, because he overcame his battle and has since recovered. Whether it’s an individual experiencing drug addiction themselves, or family members and friends dealing with the difficult situation of having a loved one going through a similar battle, so many Texans can relate to this moment. Trump went low as he so often does, and it backfired immensely.

8. Conversations about racial injustice should not be overshadowed by “law and order” fearmongering.

Unsolicited opinion from a black man: everything that's wrong with race in America is three white men starting a conversation "about race" and having it immediately degenerate into an argument about "law and order."

Texas has the third-highest number of killings of Black people by police officers in the U.S. The issue of police brutality is extremely important to Texans. But last night, Trump didn't even care enough about the issue to acknowledge it exists.

Instead of talking at length about the issues of racial injustice and anti-blackness that run rampant in our country, Trump rushed into the subject of "law and order". For a man who has seven former advisers that have now been criminally charged, you’d think Trump wouldn’t be so quick to want to speak on that topic. Biden has a plan to address racial inequities, but it was glossed over due to the chaotic nature of the debate. Here is his plan.

9. Trump isn’t trying to win. He wants to cheat and steal the election.

The final question at a presidential debate is about pledging to not declare victory until all the votes are counted and to commit to a peaceful transfer of power.

In addition to Trump’s attacks on mail-in voting, he also refused once again to commit to a peaceful transfer of power. He knows that he is going to lose, and he plans to fight the results at every stage. And with Texas solidifying its status as the biggest battleground state this year, there is a chance that fight could be over our votes. We must be prepared.

Biden chose the non-dictatorial route, and committed on the spot to a peaceful transfer of power.

10. Every Texan needs to vote.

If you're having a hard time accepting that this is our reality right now, please vote.

We can change our reality, but we've got to win this election by a landslide and squash Trump's attempts to steal the election. #Debates2020

The debate confirmed much of what we already knew. Trump is not fit to be president. Our country is worse off because of these last four years with him in charge. We must elect Biden and leaders up and down the ballot who take this pandemic seriously and have a plan for the issues that impact so many of us. And we have to win in a landslide so big that the results cannot be questioned or influenced by Trump’s voter suppression schemes.

We shouldn’t need two more debates. The choice is clear. Vote for Biden.

Visit GoVoteTexas.org for information about the upcoming election and to get registered to vote.