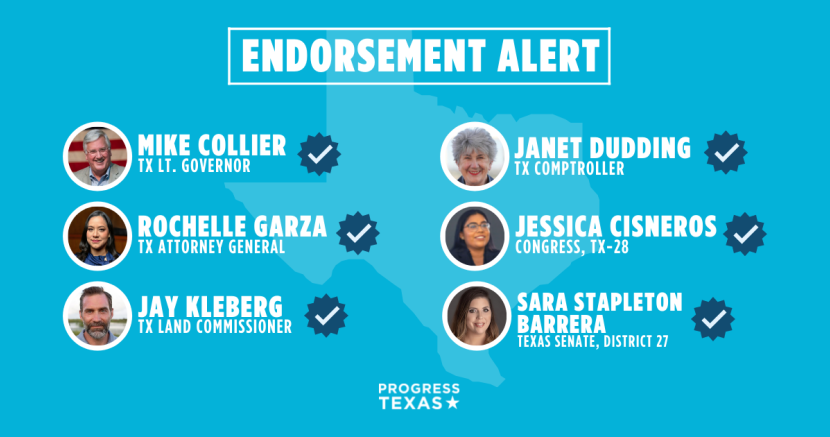 Progress Texas
The May runoffs are your last chance to choose party nominees for the November ballot.

You may be thinking, “Didn’t Texas just have an election?” The answer is: Yes! But there’s another election just around the corner.

Texas has a second election this month with early voting starting on Monday, May 16 and Election Day on Tuesday, May 24. This election is a primary runoff, for candidates in partisan primaries who did not receive more than 50% of the vote in the March primary.

Help spread the word and make voting as easy as possible for your fellow Texans by sharing our endorsements below.

In the 2018 general election, Mike Collier came within 5 points of defeating Lt. Governor Dan Patrick - a mere 400,000 votes out of 8 million cast. Collier winning the nomination would set up a rematch in 2022.

The Lieutenant Governor is the state’s second-highest executive office. As president of the Texas Senate, the Lt. Governor appoints committee chairs and vice-chairs, appoints senators to committees, assigns bills, and controls the Senate’s agenda. They also control the budgeting process, serve as a member of several commissions and boards, and act as governor in the governor’s absence.

Collier’s experience as an accountant gives him a deep understanding of how our state's budget works. Some of his priorities include fixing the state’s broken school finance formula, “fixing the damn grid,” creating good paying jobs, and defending Texans’ constitutional rights, including the right to abortion access.

Dan Patrick has taken advantage of the Lt. Governor’s office for far too long, changing the rules of the Senate to push forward his extremist agenda. Collier wants to “return competence to the office of Lt. Governor” by focusing on the real issues impacting Texans. That’s why Collier has our full support.

The Texas Attorney General is the top law enforcement officer for our state and is supposed to serve as the people’s lawyer and an advocate for Texans. However, you wouldn’t know that by looking at our current Attorney General Ken Paxton, who’s been under felony indictment for years.

Rochelle Garza’s experience makes her uniquely qualified for this position. As a former civil rights attorney, Garza fought for children, immigrants, and families. In Garza v. Hargan, Garza was the guardian for Jane Doe, a pregnant 17-year-old denied the right to an abortion. Garza fought in courts in Texas and Washington, DC on Jane’s behalf, and she won! Teens in immigration custody are now given the “Garza Notice,” informing them of their right to access abortion free of obstruction and retaliation.

Garza was raised in Brownsville, Texas and has been a lifelong fighter for border communities in the Rio Grande Valley. As AG, Garza plans to champion voting protections, abortions rights, accessible health care, workers’ rights, LGBTQ+ rights, and more.

At a time when abortion rights are under attack, it is crucial that Texans have an attorney general who will fight for reproductive freedom and civil rights for all.

The Texas Land Commissioner is the states’ top environmental post. They are responsible for overseeing Texas’ 13 million acres of public lands, distributing natural disaster relief funds, protecting the Alamo, and working to keep our beaches clean and open. Under the right leadership, the office can also lead the way in addressing the climate crisis.

Jay Kleberg (pronounced CLAY-berg) was born in South Texas and raised on his family’s working ranch. He’s an environmental advocate and has had a long career in conservation. His platform includes increasing contributions to the Texas Permanent School Fund, increasing wind and solar energy production, decreasing reliance on fossil fuel extraction, and making Texas’ coastlines more resilient in the face of climate change.

Kleberg has spent his entire life working to protect and preserve our beautiful state, and that’s why he has our support.

As the state's sole accountant and chief financial officer, the Texas Comptroller is in charge of how our taxes are handled. Their responsibilities include maintaining the state’s finances, collecting taxes and fees, paying agencies’ bills, and issuing paychecks to state employees.

Janet Dudding is a long-time certified public accountant who began her governmental accounting career with the Office of the State Auditor, investigating allegations that governmental officials had embezzled taxpayer money. She’s spent her professional life holding governments accountable to people, not special interests.

Dudding wants to use the office to speak out on policies affecting Texas’ economy, and urge the Legislature to spend taxes more wisely. Dudding has pointed out ways Texas is wasting money, including our state’s failure to expand Medicaid and failure to prepare for climate disasters. Her platform includes legalizing/decriminalizing recreational cannabis, reducing methane emissions on state-owned land, expanding broadband internet expansion, and more.

Dudding’s approach to the comptroller’s office would be backed by decades of financial experience. We trust her to use our taxpayer dollars wisely and for the benefit of the state.

Endorsements in other key races:

Progress Texas endorsed Jessica Cisneros in 2020, and our support for her has not wavered.

District 28 runs from San Antonio to Laredo, and Cisneros is challenging Rep. Henry Cuellar, a self-described conservative Democrat who voted for Trump’s agenda more than another Democrat, earning him the title “Trump’s favorite Democrat.” Cuellar is the last anti-abortion Democrat in Congress and he needs to go. With the Democratic congressional majority at stake, every single vote is going to count for future legislation. Cuellar could be the deciding vote that tanks critical abortion rights bills or items dealing with other key progressive issues.

With Cisneros, we never have to worry about whose side she’s on. A proud daughter of Mexican immigrants and an attorney from Laredo, Cisneros is running on a progressive platform that includes standing up for immigrant rights, increasing the minimum wage, working toward a future that decarbonizes the economy, is in favor of LGBTQ+ equality, paid sick leave, and abortion rights.

It’s time for residents in District 28 to be represented by someone who knows the community and embodies what it means to be a progressive.

Progress Texas endorsed Sara Stapleton-Barrera in her 2020 race against Sen. Eddie Lucio Jr., and though Lucio is not running this year, we still think she’s the best candidate for the job.

Stapleton-Barrera is a trial attorney and human rights advocate. And if she wins her race, the Harlingen-native would be the first woman ever elected to the Senate from District 27.

Her platform includes increasing access to affordable health care, ensuring Texans have a quality public education system, preserving our environment, and more. Stapleton-Barrera also supports abortion and LGBTQ+ rights. This is a stark contrast from her predecessor, Lucio, who supported anti-trans legislation and voted in favor of the six-week abortion ban.

Rio Grande Valley residents deserve to finally be represented by a candidate who advocates for them.

These races are only the tip of the iceberg. There are District-level elections for State Board of Education members, more congressional races, and other Texas Senate and House seats up for grabs. There are also a number of local races on the ballot.

For more information on what’s on your runoff ballot, visit Vote411.org. You can also visit GoVoteTexas.org for more voting info and MyTexasVotes.com to find a polling place near you.