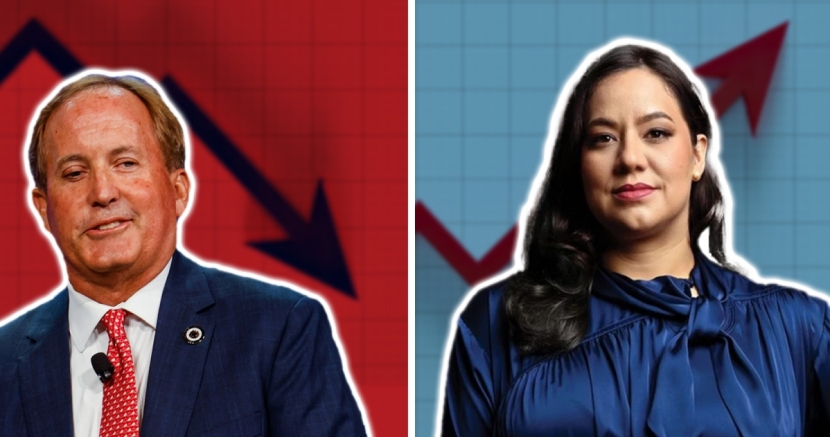 If there’s one thing we’ve learned about Attorney General Ken Paxton, it’s that he loves to buck the law. Despite serving as “top legal officer of the state,” his eight years in office have been riddled with fraud, corruption, and misinformation.

The most recent UT-Tyler poll showed Paxton in a statistical dead heat with Rochelle Garza,  his Democratic opponent. Garza leads by five points among independent voters. And even though Paxton has significantly more funding than Garza so far, she still outraised him by $180,000 during the last fundraising cycle.

Paxton’s getting scared. He won the 2018 election with just a 3.6% margin and, given how much trouble he’s caused since then, his chances for a third term are slimming each day.

He’s been sued by the Texas State Bar, indicted on fraud charges, and is under investigation by the FBI over corruption allegations.

His legal troubles have already cost taxpayers more than $500,000, and that number could keep growing. While charging taxpayers for legal problems isn’t uncommon, the sheer level of his legal troubles is strange — and voters aren’t letting his infractions slide.

Given his standing, it’s no surprise that Paxton is trying to create more chaos at the ballot box.

On Aug. 17, Paxton released a non-legally binding opinion advising elections departments to let anyone examine ballots the day after they are counted. But federal and state election laws require ballots remain secure for at least 22 months after an election.

He’s seemingly spent nearly every day since the 2020 election feeding into Trump’s Big Lie, spouting voter fraud conspiracies and denying President Biden’s win in key states. The entire reason the state bar is suing him is that his claims are baseless, manipulative, and instilling unnecessary doubt around the electoral system. It’s a wonder he hasn’t been disbarred (yet).

His opinion violates the election code and contradicts advice his office gave counties as early as five days prior. According to public records obtained by Votebeat, on Aug. 12, Aug. 1, July 26, and June 16, the attorney general’s office advised counties to keep ballots “confidential for at least 22 months after election day.” Now, suddenly, he wants to risk ballot security?

If county elections officials are to follow Paxton’s orders and thus defy the Texas election code, there’s a chance they could face prosecution. Plus, according to Votebeat, “the implications of Paxton’s Aug. 17 decision are tremendous for local election officials, who say they would not be able to conduct legally viable recounts or protect ballots in event of a challenged result by a candidate.”

County offices across the state have already seen an increase in requests for ballot access since Paxton released his decision. With the midterm election quickly approaching, an influx of requests could overwhelm already understaffed and underpaid elections departments.

Fanning the flames of threats from far-right activists

Election officials have received an onslaught of physical threats over the last two years and, earlier this month, the entire Gillespie County elections staff resigned due to harassment from far-right conspiracy theorists. A survey from the Brennan Center earlier this year found that one in five election workers is likely to leave their posts before the 2024 election.

During the March primary, changes in ID requirements caused 23,000 Texans to have their mail ballots rejected. SB 1 states that the identification number a voter uses on their vote-by-mail application and mail ballot must be the same number they used to register to vote, however long ago that may have been. But there’s no real way for a voter to verify which ID they used at the time of registration — a major flaw that impacts all voters, regardless of party or age (the recommended remedy is to list both ID numbers on mail ballot applications).

Perhaps Paxton thinks his only hope at winning the midterm election is giving his conspiracy-driven, far-right constituents what they want. Or, rather, giving Trump what he wants. Trump has publicly endorsed Paxton and is hosting a fundraiser for him at Trump National Golf Club this week.

Paxton’s already on rocky ground, legally speaking. Fundraising with a former president who’s under active FBI investigation is an interesting choice on his part. But the move comes as no surprise when he’s more worried about maintaining power than serving Texans or following the law.

It’s time for Paxton to pack it up. Our best bet at restoring integrity to the attorney general’s office is electing Rochelle Garza this November. Learn more about her at RochelleGarzaForTexas.com.

Need to register to vote or check your status? Visit GoVoteTexas.org for more information.