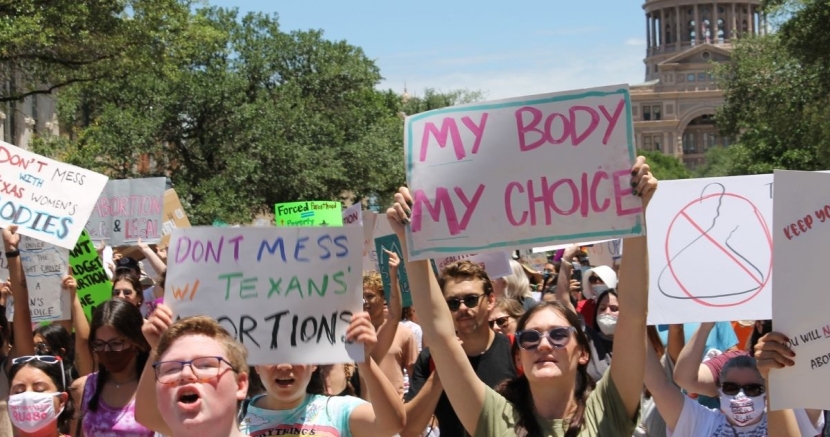 Diana Gómez
Texas’ 6-week abortion ban could allow anti-abortion extremists in any state to reap a minimum $10,000 bounty on anyone who helps someone get an abortion in Texas.

On May 19, Gov. Gregg Abbott signed Senate Bill 8, or Texas’ 6-week abortion ban, into law. At its core, it is a cruel, unconstitutional attack on essential health care and our basic reproductive rights. Similar abortion bans have passed across the country with many succesfully overturned after facing federal lawsuits finding them to be in violation of Roe v. Wade.

However, Texas’ abortion ban is unique in that it contains some of the most extreme abortion restrictions in the entire country. Aside from banning abortion after six-weeks (before many people even know they are pregant) and allowing no exception for victims of rape or incest, SB 8 also includes a shocking provision allowing for “citizen lawsuits,” essentially transforming anti-abortion extremists across the nation into potential bounty hunters.

SB 8 allows any citizen, from any state, to sue someone in Texas who merely provided assistance to someone who needed an abortion, and reap a cash reward. This means anyone, in or out of Texas, would have the ability to target and sue anyone they believe helped provide abortion care in Texas. Physicians, nurses, clinic staff, family members, friends, clergy, domestic violence and rape crisis counselors, or even abortion funds can be targeted and face civil liabilties.

For example, if you were to give someone a ride to an abortion clinic in Texas, presumably a person from Oklahoma could sue you and receive at least $10,000 in damages. If you were to give a family member money to get an abortion, a person in Florida that you’ve never met and have no relation to, could sue you. Even worse, this would allow the dangerous possibility of a former or current abuser to sue their victim, causing them further trauma.

In late April, before SB 8 was signed by Abbott, 370 Texas attorneys, elected officials, former judges and law professors signed on to an open letter in opposition to its passage, directed to the Speaker of the Texas House Dade Phelan. It called out the unconstitutionality of the bill and warned that if passed, SB 8 would “undermine long standing rules and tenets of our civil legal system.” But Abbott and the GOP have never prioritized protecting our constitution or Texans’ health care needs for that matter.

Abbott signed this unconstitutional bill into law that not only makes a mockery of our legal system but will also prevent Texans from receiving the essential, life saving health care that they deserve. Doctors around our state shouldn’t have to fear being sued as a result of providing routine health care.

It goes without saying that so much time and taxpayer resources were wasted on the passage of SB 8 that could’ve been spent on legislation that would actually benefit Texans like expanding Medicaid, fixing our energy grid or providing COVID relief.

Not only did attorneys across the state stand against this egregious lawsuit provision, but a bi-partisan poll released by the Trust Respect Access coalition found that Texas voters also expressed opposition by wide margins with 63% opposition to out-of-state lawsuits. It also found that Texans do not believe that abortion should be a top priority in the Legislature. A majority of Texans did not support this bill, but Abbott and the GOP did what they do best: ignore Texans’ priorities and instead cater to their far-right base.

On July 19, a group of abortion advocates began a legal battle against Abbott and anti-abortion extremists by filing a federal lawsuit against Senate Bill 8. Although Abbott already signed the bill into law, it will not go into effect until September 1st and these advocates are doing everything they can to prevent that from happening.

This latest anti-abortion law will not withstand legal scrutiny. It’s a wild and unconstitutional stunt that dismisses common sense health standards for the sake of Gov. Abbott and Texas Republicans pleasing a far-right, out-of-touch base. Abortion is  time-sensitive, essential healthcare. Regardless of whatever Governor Abbott signs, no law will stop abortions from happening. Texans are watching and we’ll be here in 2022 to remind them of the GOP’s misplaced priorities and Abbott’s attacks on our rights.