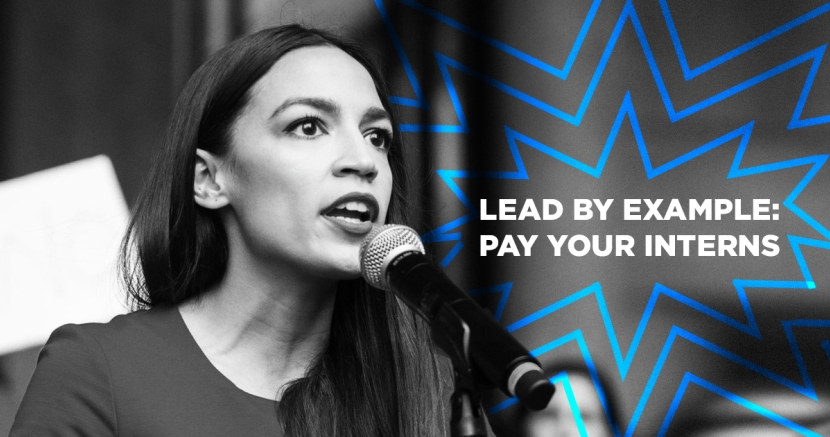 Unpaid internships are not progressive (sorry, not sorry)

Alexandria Ocasio-Cortez got it right. Progressives must practice what they preach when it comes to unpaid internships.

Congresswoman Alexandria Ocasio-Cortez made recent headlines because of her plans to pay congressional interns at least $15 an hour. Why was this news? Because very few members of Congress actually pay their interns.

Unpaid internship positions in public service, government, and non-profits run rampant. And “progressive” organizations are often guilty of hiring interns with no intention of paying them.

But when it comes to internships, progressives must practice what they preach.

How can we argue in good faith for better working wages and increased diversity in the workplace when our own interns are not even getting paid for their work? If progressives intend to implement policies that address these issues, they must start with their own organizations and places of work.

Unpaid internships create a barrier for people who cannot afford to work without pay.

Unpaid internships prevent many low- and moderate-income students from accessing careers in public service and politics.

Speaking from my own experience, if I had not found an internship that paid, I would not have been able to be involved in this work. And that’s not from a lack of passion.

Students have bills to pay. College is more expensive than ever before and meanwhile, unpaid internships continue to increase. I have friends who have had to work three or four unpaid internships before finally finding one that paid. This exploitation is not only unethical, but results in so many qualified, passionate young people losing interest in the movement and choosing other areas of work.

Unpaid internships are for the financially privileged who can afford to spend hours a day doing work with little to no income. The fact is, some of us are not that lucky.

The current system hinders the economically disadvantaged from getting involved in progressive work and disproportionately impacts people of color. So many exceptional interns have to choose between an unpaid internship in the progressive movement (which is essentially just volunteering) or getting paid doing something else.

And for some, it’s not even a choice.

When interns are paid, both sides reap the rewards.

The employers get the opportunity to choose from a pool of more qualified applicants, instead of just people who can afford to work without pay. And the intern feels valued by the organization they work for.

Speaking again from my own experience, I’ve felt more invested in the organization I work for and a lot more comfortable taking on additional responsibilities because I am paid.

And with the risk of overestimating my own value, I feel it worth noting that when interns are paid, they produce higher quality work (just ask my boss). Because interns are able to focus more on their work, they are more productive, which collectively results in a better product. It’s a win-win.

I know how lucky I am to work for an organization that lives out their values, but that shouldn’t be rare. Paid internships should be the norm.

Interns are an asset to any organization and deserve to be treated as such.

If progressives are going to talk the talk, then they must walk the walk.