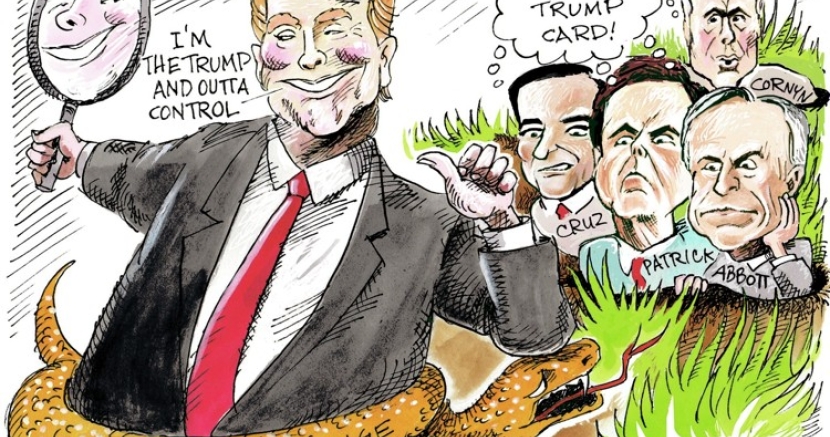 Trump Can Fire Comey But He Can't Fire Us

Trump is stuck with his narcissism, hollowness, greed and authoritarian ways.

Recent American history seems like a series of more-or-less pro-democracy interludes between authoritarian crack-ups. Affaire de Trump is just the latest, and most dangerous, of the wrecks.

There was the Joe McCarthy 1950s (sorry, President Eisenhower, the era doesn’t belong to you). Then there were the Civil Rights, environmental, equal rights and health care victories of the 1960s. Then came Nixon and the prolonged Watergate scandal in the early 1970s.

Following that was an era of consequential ethics and open government reforms, an uneven economic period, and the prosperity of the 1990s. Then came George W. Bush’s war-based-on-a-lie in Iraq, followed by President Obama’s renewed focus on equality and justice. And now there is Donald Trump.

How does one begin to analyze the Affaire de Trump? Trump fired FBI director James Comey, subsequently confessing that Comey’s investigation of Trump’s Russian connections was on his mind at the time.

Trump then immediately met privately in the Oval Office with Russian diplomats as if to dramatize his apotheosis, his ascendency beyond the mere rule of laws made by men.

Several news organizations have now confirmed that Trump gave the Russians highly classified intelligence on ISIS during that meeting.  The U.S. had received it from another country with an understanding it would not be shared.

The firing of Comey stands out for its parallels with Nixon’s “Saturday Night Massacre” when two Justice Department leaders resigned rather than follow Nixon’s order to fire the Watergate special prosecutor. Comey had just testified to Congress that the FBI was investigating possible Trump campaign collusion with Russia’s hacking of the 2016 election.

Trump, by the way, had already fired acting Attorney General Sally Yates and U.S. Attorney Preet Bharara. Both were involved in Russia-related investigations.

Several of Trump’s close associates – his former National Security Advisor Michael Flynn, his campaign manager Paul Manafort among them – are under investigation in connection with the election and their various Russian connections and assignations. The appointment of widely respected Robert Mueller, former FBI director, as a special prosecutor promises to intensify the criminal inquiry.

Often lost in the Trumpian Chaos: Russia intervened in the U.S. election hoping to shape a particular outcome: the election of Trump. Russia and its president, Vladimir Putin, succeeded. Trump was elected with the help of a foreign power to which he now bows regularly and deferentially.

Trump’s deference is rather obvious in the Oval Office photos of him with Russian Foreign Minister Sergei Lavrov and Ambassador Sergey Kislyak. Trump doesn’t usually let himself get upstaged, but he did in this instance. He stoops a bit and smiles awkwardly. In these Oval Office photos, taken by a Russian photographer (U.S. press was banned), Trump is clearly not the boss.

Trump is stuck with his narcissism, hollowness, greed and authoritarian ways. He’s not going to change.

We, however, are not stuck with Trump or his lack of character. It is frightening that the American political system could produce a President Trump. Frightening, but not surprising. Years of right-wing partisan redistricting, voter suppression, and the rewarding of raw power without regard for the impact on the institutions of democracy have weakened us.

Republicans in Congress are reluctant to abandon Trump even though they know they should. Why? Because they’ve used the redistricting process to pack their districts with the most extreme voters they could find. Now those voters, a minority of Americans, are calling the shots. They are, by and large, Trump voters, and, frankly, GOP officials are scared of them.

Trump can fire Comey, but he can’t fire us.

Americans, Texans included, are going to have to once again prove that we care about democracy. Democracy is not like a car in the garage that we can drive only when we want to. No, we are at the wheel all the time, and the nation is always moving at high speed. Question is, will we control it?

Republican majorities in Congress and in states like Texas can remain in their hidey holes only so long. Fearful of the right-wing fringe, they are reluctant to stand up for democracy, content for the moment to stand by Trump.

It was not so during Watergate. In fact, it was the courage of Congressional Republicans to stand against Nixon and for the Constitution that helped save us. Where is that courage today?

The Affaire de Trump is only incidentally about Trump. It is about us. It’s the character of the American people that is being tested. Are we up to the challenge? Do we still believe in Democracy?