Thanks to you, the Department of Justice is suing Texas over anti-voter law pushed by GOP 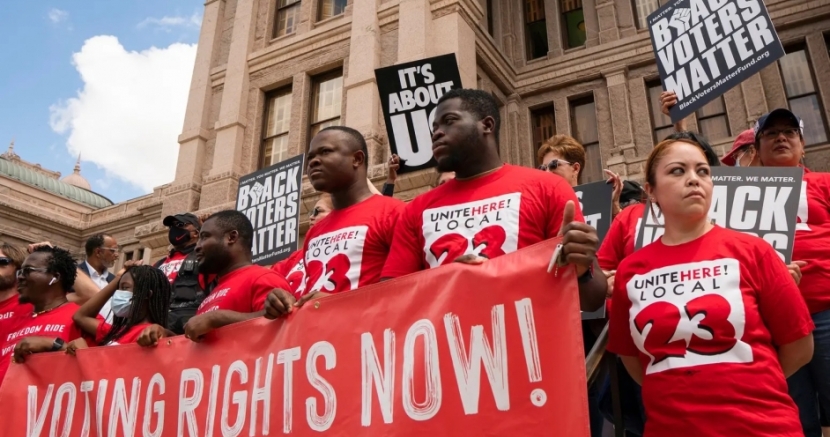 After hours of Texans’ testimonies given at the Capitol, United States v. Texas has finally come to fruition.

With a legislature that does not adequately represent us and a governor hellbent on appeasing a small far-right base at the detriment of children, every day in Texas feels like an uphill battle. This has especially been true with voting rights as we are reminded time and time again that it is harder to vote in Texas than in any other state.

Last week the U.S. Department of Justice filed a lawsuit against Texas over Senate Bill 1, expansive anti-voter legislation that was signed into law by Gov. Abbott in September.

Abbott’s signature came despite tireless efforts by Texas Democrats and progressives throughout the state to kill the anti-voter bill. In July, hundreds of Texas residents gathered at the Texas Capitol to wait a grueling 17 hours to testify against the previous version of SB 1.

Since the anti-voter bill was moved through multiple legislative sessions over the course of a few months, there were hundreds of vital public testimonies heard. In addition, Texas House Democrats avoided the passage of previous versions of SB 1 by breaking quorum two separate times, many flying to Washington, D.C. to request help at the federal level.

When harmful legislation passes into law regardless of our efforts, things can begin to feel hopeless. The 2021 legislative sessions, while action packed with incredible work by progressives, probably left many of us feeling lost, wondering if the countless hours we spent fighting for our voting rights would ever pay off.

Well, guess what - the Department of Justice directly referenced your testimonies in their lawsuit:

These testimonies were only a small part of the work that has been done to organize against Republican attacks on our voting rights. We’ve seen you signing our petitions, contacting legislators, and sharing information about voting. People are showing up.

Why is the Department of Justice suing Texas?

While there are a number of issues with the new anti-voter law, the Department of Justice cites two main causes of action:

Let this lawsuit be a beacon of hope to all of us. Keep up the fight. We need everyone to have access to the polls come 2022.