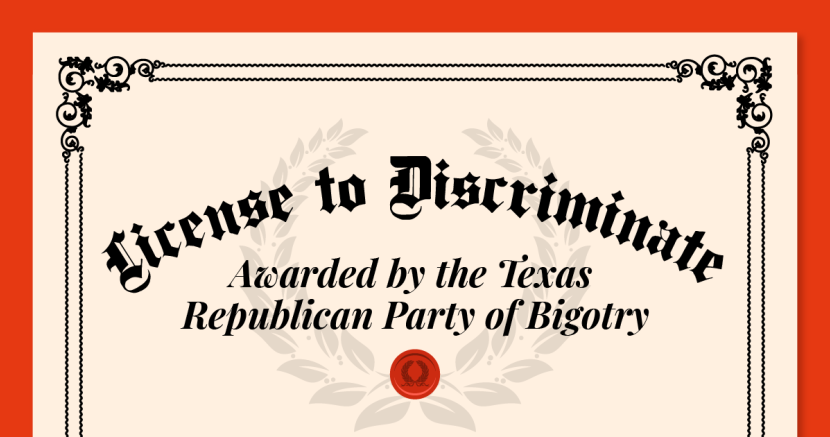 Wesley Story
Texas Republicans may be quieter about their homophobic agenda this legislative go ‘round, but their actions make their intentions loud and clear.

Two years ago, Texas lawmakers debated about whether transgender Texans should be able to use the restrooms that aligned with their gender identity. The whole ordeal was shameful, humiliating, and an affront to the entire LGBTQIA+ community.

Now, Texas Republicans are putting on a show. They want us to believe that stain on their record is behind them. They’ve grown. They’ve changed. They’ve evolved.

Sure, they say. Transgender Texans can use the bathrooms of their choice. That issue has been settled. But that doesn’t mean licensed practitioners should have to serve them, or any of the LGBTQIA+ community for that matter. God forbid!

Two years later and lawmakers are still debating about the rights of LGBTQIA+ folks, and whether they should be treated with the dignity they deserve.

Senate Bill 17 is about discrimination. Nothing more.

On Tuesday, the Texas Senate voted to pass Senate Bill 17, which if made into law, would allow occupational license holders to turn away or refuse services to LGBTQIA+ people or people of different faiths due to “sincerely held religious beliefs.” SB 17 is now headed to the House.

Texas currently has no statewide law that explicitly protects LGBTQIA+ Texans from discrimination and Texas Republicans have a history of using religion as a weapon to discriminate. By prioritizing SB 17, Lt. Gov. Dan Patrick and the Texas Senate are once again twisting the definition of religious freedom, separating a founding American value from its original meaning and using it as an excuse to hurt Texans.

The fact is, this bill is not about religious freedom. An amendment was introduced to the bill that would shield LGBTQIA+ folks from discrimination. Since Republicans claimed the bill was not meant to be used to discriminate, it would’ve made sense for them to vote in favor of that amendment, right?

Unsurprisingly, the Senate voted to reject the amendment and the bill moved forward without the changes necessary to protect LGBTQIA+ Texans. For Senators to continue to try to pass the bill off as anything other than a license to discriminate is a slap in the face to anybody who has ever actually faced oppression due to their religion.

This bill is just another way to advance the Republicans’ bigoted, hateful agenda that targets the LGBTQIA+ community and other oppressed groups.

The Texas lawmakers that support SB 17 are totally out of step with the rest of the state. According to a new analysis from the Public Religion Research Institute, a majority of Texans — 66 percent —  remain supportive of nondiscrimination laws that would protect lesbian, gay, transgender, and bisexual people from discrimination in jobs, public accommodations, and housing.

The new analysis also finds that more than half of Texans oppose allowing a small business owner to refuse to provide products or services to gay or lesbian people based on the owner’s religious beliefs.

As mentioned before, there is no statewide law in Texas that protects Texans from being fired or discriminated against due to their sexual orientation or gender expression. And as our legislators debate our rights under the dome, queer Texans across the state face discrimination because of the legislator’s unwillingness to give LGBTQIA+ Texans the protections they need.

Bills have been introduced in that would provide comprehensive protections for LGBTQIA+ Texans in state nondiscrimination laws such as SB 151, HB 244, HB 254, and HB 2692. In addition to calling on our representatives to vote NO on SB 17 when it gets to the House, we also need to show up to support bills like these.

Sign your name to say you support equality for all LGBTQIA+ individuals.