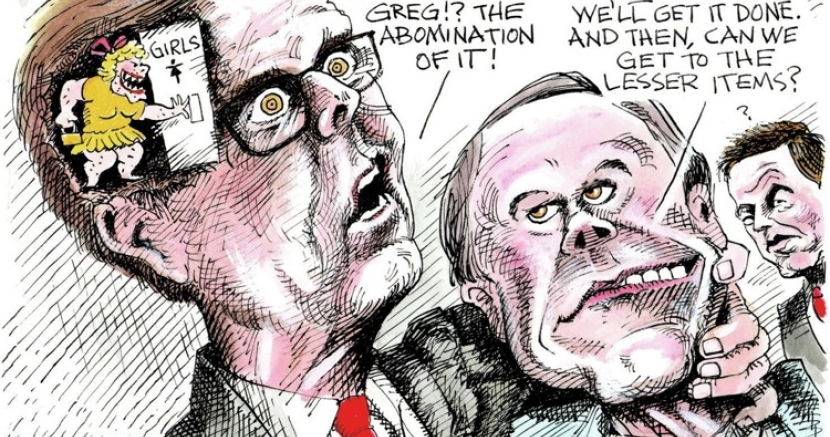 Texas Lawmakers are Locked in the Bathroom

If the Texas Legislature is going to waste time, they should do so on something less mean-spirited, less regressive and less discriminatory.

The Texas Legislature seems to have locked itself in the bathroom — and it won’t come out.

Outside, millions of Texans — like confused family members wondering what could be wrong — pound on the bathroom door, pleading for lawmakers to come out. We refer, of course, to legislation that would force transgender folks to use public restrooms designated for their birth gender.

It’s Lt. Gov. Dan Patrick’s obsessive interest in who goes to the bathroom where that’s led to this impasse. Recently, Gov. Greg Abbott came in through the bathroom window to join Patrick’s effort.

Despite the fact that Texans have been sharing public restrooms with transgender people for decades, it’s suddenly an emergency issue. The state Senate has passed Senate Bill 6, which would require people to use restrooms that match the gender listed on their birth certificates.

The House, which is less predisposed toward the legislation, is nonetheless considering a “compromise” bill with broad language that strips cities and school districts from passing laws regulating restroom access to protect a class of persons from discrimination.

That seems more like capitulation than compromise. Yes, this new House version sponsored by Rep. Ron Simmons, R-Carrollton, drops the word “transgender.” The intent remains the same, even if it claims to paint a happy face on the doors of public restrooms.

The bathroom bills are opposed by many Texas businesses that look to the experience of North Carolina, which recently repealed its bathroom law after losing more than $600 million in revenue, according to a report in Forbes. The National Collegiate Athletic Association and the National Basketball Association had canceled events scheduled for that state after it passed the discriminatory legislation.

The Associated Press has estimated that Texas could lose $3.67 billion over a dozen years if it adopts a similar bathroom bill. That casts the term “pay toilet” in a new light. For those too young to remember, some airports and other public facilities used to place parking meter-like coin mechanisms on stall doors. That was so yesterday. But so were overt discriminatory laws that targeted particular classes of people.

In many places, African-Americans were once forced to use segregated bathrooms and water fountains. They wouldn’t be served by the bigoted owners of some restaurants. Those are just examples. There are many other examples of legal discrimination against this or that class.

But America grew out of such practices. U.S. Supreme Court Justice John Roberts even said so. “Our country has changed,” Roberts said in his opinion, noting that some provisions of the Voting Rights Act were no longer necessary because racism had declined.

Roberts’ snow-blind exaggerations are off-putting. Still, institutionalized bigotry has declined over the decades. Maybe some hard-right politicians like Patrick miss the old days.

It would be foolhardy for the Legislature to risk billions of dollars in the Texas economy by passing a discriminatory bathroom bill. That’s especially so when it’s understood that the real intentions of Patrick and other supporters is simply to pander to a few bigots on the far right.

The bathroom bills discriminate against transgender folks; could cost our economy billions of dollars; and, on top of that, will likely be unenforceable.

None of the contemplated measures would penalize the person using the wrong restroom. No, only the owners of the restrooms would be in trouble. Or, perhaps, cities or school districts who moved to protect transgender people from discrimination.

Many of our state leaders — including Patrick and Abbott — are annoyed that local governments can pass ordinances and orders without their permission. They are moving on a variety of fronts to diminish the power of local voters to make their own decisions on a variety of issues.

Bathroom bills are the most ridiculous of the bunch. The time wasted on these proposals is time that should have been spent finding more money for public education, health care or economic opportunity for Texans.

If the Texas Legislature is going to waste time, they should do so on something less mean-spirited, less regressive and less discriminatory.