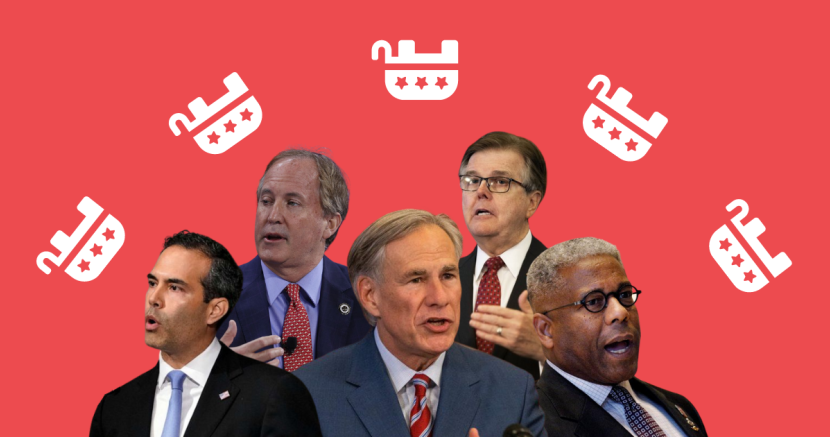 Abby Springs
From the Capitol to the campaign trail, the Texas GOP is in total disarray.

Over the last year, Texans across the state have faced challenge after challenge. 2020 and 2021 brought us a global pandemic, economic crisis, and historic winter storm, and that’s not to mention the ongoing crises of climate change, gun violence, and racial inequality.

With all of these problems to tackle, the 87th legislative session was the Texas GOP’s best chance to make some real change and help Texans recover from the last year. But in true Republican fashion, our leaders ignored our real problems and focused on culture war priorities, party infighting, and self-sabotage of their own legislation.

Instead of uniting to help Texans, the Texas Republican party is at war with itself.

Throughout the 87th legislative session, Republicans at the State Capitol fought each other over permitless carry, anti-trans legislation, our failing energy grid, and more. But their infighting culminated in a major defeat for the Texas GOP the night before sine die — the death of voter suppression bill SB 7.

Legislators like Briscoe Cain had championed the bill as one to protect “election integrity,” which was a priority for Gov. Abbott and really just code for disenfranchising voters of color. But thanks to their total mishandling of the legislation throughout the session, the bill had just hours to pass before the final deadline. That gave courageous House Democrats the chance to walk out of the House floor and break quorum, killing the bill and protecting our voting rights in the process.

After the quorum broke, the Republican firing squad turned inwards as they had no one to blame but themselves for the death of their priority voter suppression bill. First, Speaker Dade Phelan criticized the Texas Senate for taking too long to prepare the legislation:

After Senate Bill 7 officially died thanks to Republican infighting and the Democrat walkout, Greg Abbott put fuel in the fire by tweeting that he would defund the Texas legislature in response.

I will veto Article 10 of the budget passed by the legislature.

No pay for those who abandon their responsibilities.

But while Abbott’s intention is to punish Democrats for standing up for Texas voters, he’s taking away the salaries of hundreds of working-class Capitol staffers, including researchers, analysts, maintenance, interns, and more. That also includes the staff budget for the entire Republican caucus, who we can’t imagine are very happy with Abbott’s petty threat to take away their paychecks.

Hey, we’re not complaining that the Texas Republicans are so dysfunctional that they can’t even pass their own bills with a majority in the House and Senate. But it is disappointing that Texans have lost out on Medicaid expansion, COVID relief, and a solution to our energy grid, all because the GOP has prioritized voter suppression and culture war distractions over the issues that really matter to our state.

On the campaign trail

So, what is the Texas GOP doing now that they failed to achieve their conservative priorities this session? They’re gearing up for their 2022 campaigns — against themselves.

The primary race for Attorney General is shaping up to be one of the more explosive elections this cycle, as Republican primary voters will choose between an indicted attorney general under FBI investigation and a politician willing to betray his entire family for political clout. Land Commissioner George P. Bush has already announced his candidacy against indicted-Attorney General Ken Paxton, setting the stage for a contentious and bitter primary battle between the two Republicans, in addition to a fight against former Texas Supreme Court Justice Eva Guzman, who just recently filed paperwork to run.

Both Paxton and Bush are tying themselves to Donald Trump — Paxton is known for helping him try to overthrow the 2020 election. But Bush is courting Trump’s base in the most pathetic way possible: by using Trump’s insults towards his family as political campaign merch.

I missed out on the @georgepbush swag yesterday: The koozie says "this is the only Bush that likes me. This is the Bush that got it right. I like him" - Donald Trump #txlege pic.twitter.com/pFTzQCmoRG

Meanwhile, Gov. Abbott is preparing for a primary challenge of his own, as former State Senator Don Huffines has already begun his campaign for Abbott’s seat. And as if these primaries weren’t enough to shake up the Texas GOP, the head of the Texas Republican Party, Allen West, abruptly resigned and signaled his intention to run for office. While he hasn’t said what he’d be running for (“maybe something Congressional”), the party is now without a leader going into a special session and an important election cycle.

From the Capitol to the campaign trail, the Texas Republican Party is in total disarray. When progressives flip Texas blue, it’ll be because of hard work and policies that actually address the needs of Texans across the state. But a little bit of self-sabotage by the Texas GOP might just get us there even faster.