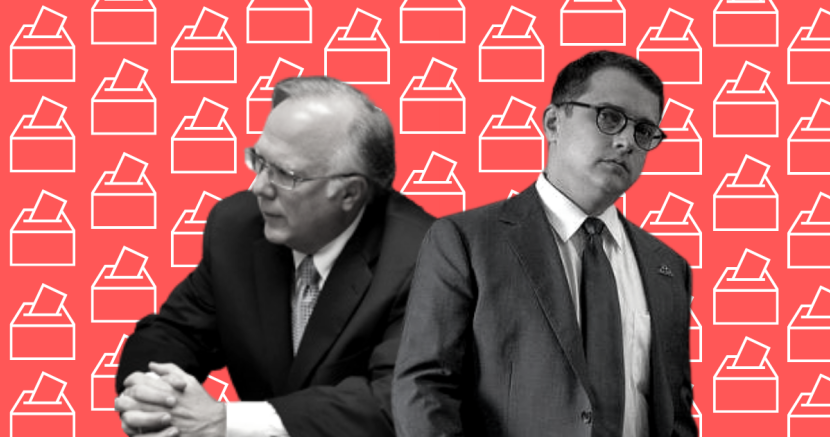 Abby Springs
Republican Reps. Briscoe Cain and Todd Hunter want to use their power to restrict ballot access, not promote it.

Last week, House Speaker Dade Phelan handed out committee assignments for lawmakers in the Texas Legislature, who can now begin the process of debating and passing bills. But for those who follow voting rights in Texas, the new assignments felt like a slap in the face.

This session is shaping up to be historic, with a massive budget to pass and a global pandemic to address. To make things even more complicated, it’s also a redistricting year, which means the legislature will redraw the state’s congressional and legislative districts using the results of the 2020 census. With vote-by-mail and voter registration being hot topics of the 2020 election and Republican attempts to overturn the results, voting rights are sure to be a major issue at the State Capitol. Republicans have even named “election integrity” as one of their key priorities, but the phrase is really just code for voter suppression.

That’s why it was so alarming to see Rep. Briscoe Cain chairing the House Elections Committee and Rep. Todd Hunter in charge of the House Redistricting Committee. Both Republicans, these two legislators have long records of suppressing voters, not supporting them.

Rep. Briscoe Cain is one of the most conservative members of the Texas House and a member of the hardline conservative Texas Freedom Caucus. His accomplishments include being named one of the “Worst Legislators” by Texas Monthly, getting suspended from Twitter for making violent threats toward Beto O’Rourke, and intentionally breaking Gov. Abbott’s COVID shutdown executive orders.

As if that wasn’t bad enough, Cain recently travelled to Pennsylvania to help the Trump legal team challenge the results of the 2020 election. Using baseless and false allegations of voter fraud, the Trump campaign filed a lawsuit that alleged problems with the mail-in ballots in the state. The lawsuit was later thrown out for “strained legal arguments without merit and speculative accusations.”

Cain had tweeted about his trip, but in the days following the Capitol riots, the tweet was removed from his account. The lies that Cain spread fueled the flames of insurrection, and he’s proven that he’s willing to throw away thousands of votes to get the election results he wants.

Now, as the Chair of the House Elections Committee, Cain is responsible for the fate of any bills that have to do with our elections. Cain has already filed terrible voting-related legislation, including increasing criminal offenses for voter fraud that doesn’t exist. His bills would also create a database of all non-citizens in Texas, a major civil rights violation and dangerous precedent for many Texans. If passed, Cain’s new bills would make it even harder to vote in Texas, a state which already has some of the greatest barriers to voting access in the country.

Cain’s appointment also means that he has the power to let good bills die in committee, which gives legislation such as expanding early voting an even lower chance of passing. With Cain at the helm of the House Elections Committee, the future of voting rights in Texas looks grim. But that just means we need to fight even harder to prevent him from stifling the votes of Texans across the state.

However, Cain isn’t the only committee chairman set to have major influence over voting in our state. The new chair of the House Redistricting is Rep. Todd Hunter, another Republican legislator with a shameful history against voting rights. As chair, Hunter will have major influence over how our legislative districts will look over the next decade. This means he could lead the process of gerrymandering our state to increase his Party’s political interests and decrease the voting power of Texans of color.

Rep. Todd Hunter, R-Corpus Christi, has been named the chair of the House Redistricting Committee.

By appointing Hunter as the Chair of the House Redistricting Committee, House Republicans are telling us that they fully intend to gerrymander Texas as much as they can. Their “leadership” has serious implications for the voting rights of Texans across the state, as well as Democrats’ efforts to flip Texas blue in the next few years.

Reps. Briscoe Cain and Todd Hunter are a sign of the battle to come over voting rights in Texas. We’re going to be fighting like hell to protect your ballot, and we need your help. You can give a donation to our efforts here, and you can find other voting advocacy organizations doing amazing work here. Finally, don’t forget to contact your legislators to tell them how you feel about voting rights and partisan gerrymandering.