Texas is failing college voters, and they deserve better 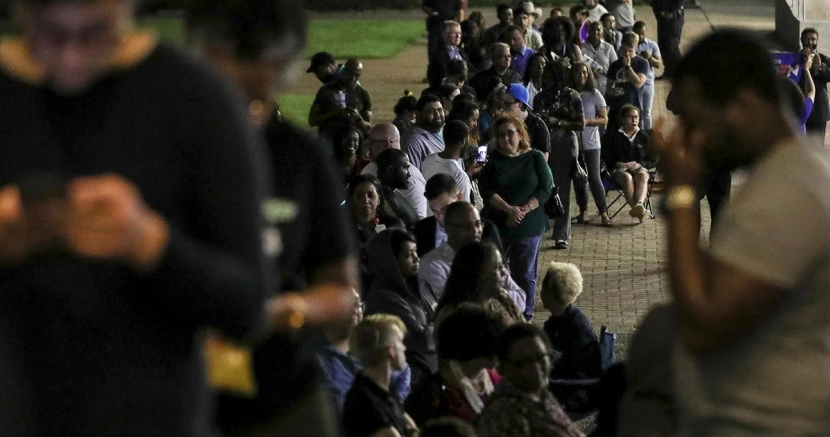 Image Credit
Photo by Jon Shapley/The Houston Chronicle
Sydney Greene
One in four eligible voters in Texas will be under the age of 30 by 2022, but the rise to become one of the most diverse and most powerful electoral blocs in the state is coming with its challenges.

Maia Young, a senior at Prairie View A&M University and Deeds Not Words Campus Organizer, knows voter suppression far too well — she’s been on the front lines, fighting for students’ access to polls on campus. Just like Maia, students at the historically Black university have been fighting for decades to have access to the polling places on campus, and in 2018, sued Waller County, accusing the county of suppressing the voting rights of black residents and denying them equal opportunity to vote.

The case was dismissed shortly after, but the fight still carries on in Waller County. Along with local student group The Panther Party, and Young’s friend group, PSP (known as the Poli-Sci Posse), she’s helped organize events and protests geared towards political student engagement and bring awareness to the suppression of the student vote in Prairie View.

“A lot of times, students are only looked as [students] — they’re not looked at as actual residents of their city,” Young said. “They conveniently get left out of political matters because it’s well known that they have the power to control the local politics if given the chance and opportunity.”

Maia is just one of the hundreds of thousands of students in Texas who face unique challenges when it comes to accessing the ballot box. Texas has had a pattern of voter suppression issues, and Super Tuesday in March proved the state’s cracks in its voting system. Last month, students across Texas — from UT and Texas State University to Texas Southern University — faced hours-long wait times at their polling places, some students waiting hours in line after class to vote.

“I believe that every vote matters, and I want to do my part,” Texas State University student Nichole Black told The Texas Tribune while waiting in line for three hours to vote. “I would also regret it if I didn't cast my vote in this primary. I think there's a real chance Texas could turn blue this presidential election, and I like the idea of being a part of history.”

But what Black, and thousands of other students went through on Super Tuesday is unfortunately, nothing new for college students in Texas. The narrative that college students don’t vote — or don’t even care — is a poor argument because of the lack of context. We must look at why students aren’t voting in the first place — and it shouldn’t always be pointed to apathy.

Students are fired up about politics, and are ready to see progressive change across the country.

But when barriers like difficult voter registration rules, little or no polling places on campus, and voter ID laws, stand in the way of students accessing the polls, they aren’t able to show up like they want.

“Voting in Texas is designed for financially secure, middle-aged, white people, which does not begin to describe the nearly 1.6 million college students on Texas campuses,” said Emily Eby, Staff Attorney for Voting Rights Program at the Texas Civil Rights Project. “Many students work alongside a demanding class and study schedule, so finding time to go vote is difficult.”

The Texas Legislature hasn’t made this any easier.

During the 2019 session, HB 1888 authored by Rep. Greg Bonnen (R-Friendswood), banned mobile or temporary voting centers across Texas — centers that could have helped disenfranchised voters like college students. While some state lawmakers like Rep. Gina Hinojosa (D-Austin), tried to pass a bill which would have required all college campuses with 10,000 or more students to have polling locations on campus, GOP lawmakers’ lack of urgency on protecting voters further showed Texans that their right to vote — especially if they were college students — wasn’t a priority.

While the punishingly long lines voters faced at Texas Southern University on Super Tuesday were recognized by local officials like Harris County Clerk Diane Trautman, who said it was  “clear that the history of marginalized communities being left behind in the voting process has led to polling deserts in areas of Harris County,” apologies aren’t enough.

What our most marginalized Texans need is action — actions that prioritize every voters’ rights to have fair and equal access to the ballot box.

So, what does this action look like in practice? Eby from the Texas Civil Rights Project said it’s simple: Texas needs to implement online voter registration, accepting student IDs as voter IDs, and counties need to make a commitment to establishing full-time polling places on campus.

“Students should not have to bend over backwards just to apply for the opportunity to vote,” Eby said. “And student IDs have a photo and are issued by accredited institutions... how are they any less valid than a Texas handgun license?”

If we want to truly galvanize the power of young voters across Texas to activate their voices through the ballot box, we must abolish oppressive voting systems that limit college students’ ability to participate in the democratic process. There’s proof that young folks are wanting to create systemic change in their communities and beyond, but when we fail to ignore the cracks in our voting system with college students, how can we expect them to bring the desire of change to the ballot box?

Bottom line: We need leadership at both the local and statewide level who will make progressive change that can help students like Maia Young access the polls easier, so young people in Texas have a seat at the table.

“From local and state leaders, I would just like to see awareness and support,” Young said. “When fighting against the policies that intrinsically suppress the vote of students, it feels like we’re fighting this by ourselves, as students. There are some phenomenal local and state leaders that have been helpful and supportive, but there’s no such thing as too much help.”

Sydney Greene is a digital content creator and freelance journalist based in Austin. By day, she serves as Digital Communications Coordinator for Deeds Not Words. When she's not managing social media platforms and digital campaigns, Sydney writes about gender, culture, and politics, where her writing has been featured in a variety of publications including Texas Monthly, The Austin Chronicle, Teen Vogue, USA Today, and more.