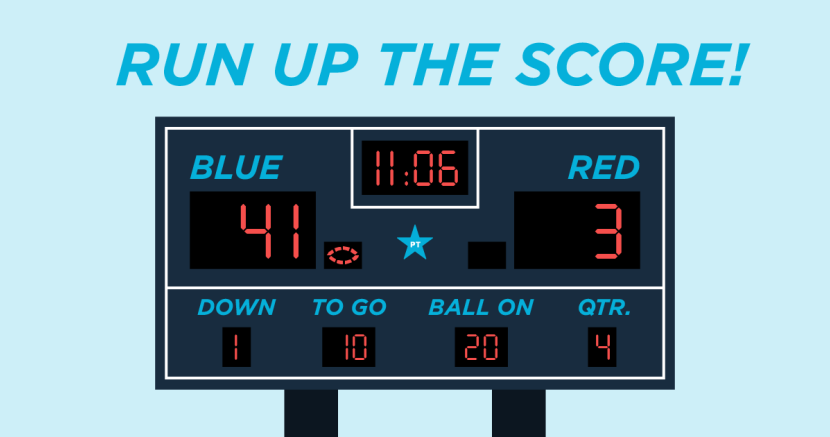 We know by now that Texas is a low turnout state - but you might not realize where that low turnout most often takes place: blue counties.

While it's true that we as progressive-minded folks can stand to do better at winning votes in some less populous counties, a lot of like-minded Texans in solidly blue counties stay home - because they think their votes don't matter. Nothing could be further from the truth.

The way we change the state of Texas is by turning out our people everywhere, which includes winning the blue counties by bigger margins in 2018.

It's not that these other 234 counties are not important, because of course they are, but voters in blue counties are not off the hook. Just because you live in a blue county does not mean your vote doesn't count. We need your votes now more than ever - we need you to help us run up the score.

We need to look at blue counties as if it's Texas playing Oklahoma: winning is fine but running up the score is even better.

The term "drop-off voter" is what we call people who vote in presidential years but stay home in midterm elections. And the number of drop-off voters is enormous in blue counties.

What about the populous non-blue counties such as Collin and Denton? Good news folks - these counties are home to some of the fastest growing Democratic populations in Texas. For instance, Collin County was won by Republicans in 2012 by a (rough estimate here) 200,000 votes to the Democrat's 100,000 votes. But by 2016, that margin was 200,000 to 140,000. That's a huge growth margin - and as you can see by Republicans maintaining their number, the Democratic votes weren't as much cross-over voters as they were new voters.

We can all help move Texas forward in 2018 if we don't leave votes on the table, if we don't get comfortable, and if we don't take this wave for granted.

The blue wave is coming, but we have to build it. Just remember these four words:

RUN UP THE SCORE!

Note: all data was sourced from the Texas Secretary of State elections page.