Texans will continue to fight back against Republican voter suppression efforts 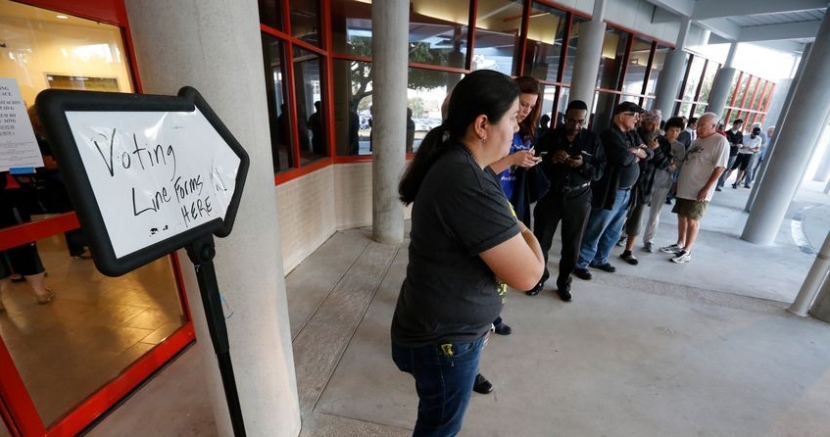 Wesley Story
Texas Republicans are limiting access to voting for college students and other communities across our state in just another effort to hold onto power.

A recent story from the Fort Worth Star-Telegram reported that campus voting may end for colleges in Tarrant County.

Why is this such a big deal? Because in 2018, college votes helped turn Tarrant County purple.

Young people and people of color are getting out to vote in numbers greater than ever before. But because of their tendency to vote against the party that currently holds power in our state, Texas Republicans have made a concerted effort to suppress the vote by limiting access to polling locations.

According to the Star-Telegram, the list of about 40 early voting sites in 2020 in Tarrant County tentatively would not include TCU, the University of North Texas medical school or four of the five Tarrant County College campuses.

This is a result of a bill passed into law by conservatives during the 2019 Texas legislative session.

While progressives were able to defeat the anti-voter bill Senate Bill 9 and block Abbott’s nominee for Secretary of State during the latest legislative session, House Bill 1888 made its way through the legislature on a party-line vote.

HB 1888, which Gov. Greg Abbott signed into law in June, effectively bans the use of mobile polling places by requiring full hours for all early voting locations.

This means locations that were previously used for temporary polling sites either have to find the funding to increase hours, or they cannot continue to be used. Since there is not enough funding to go around, many of these sites will no longer be used for voting locations.

This law is not only impacting colleges in Tarrant County, but is harmful to the entire state.

For example, Travis County has opened up dozens of temporary polling places over the past few years during early voting. There have been temporary sites at rural community centers, colleges, and even senior living facilities.

According to the Texas Observer, more than 28,000 people voted at those rotating polling sites last year. That’s nearly 6% of all Travis County votes cast during the 2018 midterm election.

It’s not a leap to assume that voter turnout would be negatively impacted as a result of the lack of these temporary polling places in future elections, not just at colleges, but in communities across the state.

While Republicans were passing suppressive legislation like HB 1888, progressives were trying to pass bills that would make voting more accessible for Texans.

HB 375, a bill introduced by Rep. Gina Hinojosa (D-Austin), would have required universities with more than 10,000 students to have a polling location on campus.

The bill was referred to the House Elections Committee, which was chaired by Rep. Stephanie Klick (R-Fort Worth) and made up of a Republican majority during the session. And surprise surprise, the bill never made it out of committee.

Texas Republicans are holding the state back.

In a democracy, the goal should always be to make voting MORE accessible in order to more accurately represent the electorate.

The Texas GOP has instead made it their mission to do the opposite because they know that if Texans were being accurately represented based on people’s values and votes, their party would be close to obsolete.

Voter suppression runs rampant in our state because of efforts such as these to silence the vote and maintain power. But Texans are fighting back!

Take Crystal Mason’s story, for example. Mason is a life-long resident of Tarrant County who was arrested and sentenced to five years in prison for submitting a provisional ballot that was never even counted.

Instead of letting the government intimidate her, she is choosing to fight by educating others as a voting rights advocate. She knows the difference our votes can make.

“I see hope in the new up-and-coming generation. They’re loud, and they speak out about their rights. They’re making noise in a good way, because they know in their hearts that if our votes didn’t matter, the system wouldn’t be trying so hard to stop us.”

Join us in our continued efforts to get out the vote by sharing our 2019 Statewide Voter Guide.