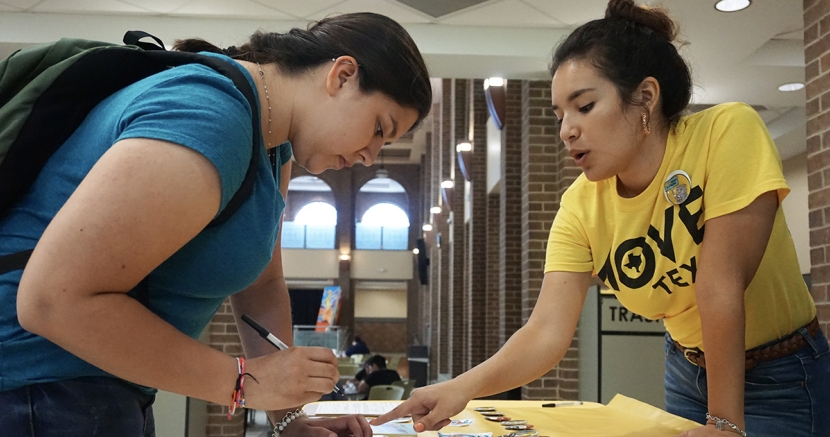 Wesley Story
Across the state, individuals and Texas organizations are working to register a record number of voters ahead of the November election.

Though the deadline to register to vote in Texas’ March primary has passed, Texans are still working to register as many voters as possible ahead of the 2020 presidential election.

Last month it was reported that for the first time in history, Texas topped 16 million registered voters and is adding voters faster than its population is growing. This is thanks to the efforts of passionate individuals and dedicated organizations across the state.

Texans are ready to show up at the polls in March and in November.

The growing progressive electorate in our state is committed to using its voice at the ballot box to create change, in spite of strict voter registration laws enacted by Republicans. To ensure that Texans are able to participate in the election process, organizations across the state have made it their mission to register voters and hold the state accountable for its voter suppression efforts.

With the help of Stacey Abrams' Fair Fight, the Texas Democrats recently launched the largest voter registration campaign in our state’s history. The campaign is focused on targeting unregistered voters and protecting the right to vote.

In addition to this major operation, organizations like MOVE Texas and Texas Rising have ramped up their voter registration efforts. The two organizations were ranked first and second, respectively, in the country for most voters registered during last year's National Voter Registration Day. That is an enormous accomplishment considering the process to register voters in Texas is more complicated than in many other states in the nation!

In addition to these registration efforts, organizations like Common Cause Texas and Texas Civil Rights Project are working hard to protect Texans’ voting rights with lawsuits and through different election protection initiatives.

Texans are refusing to let our voices be silenced by working together to register voters and protect our vote.

The fight is far from over.

It’s important to celebrate these voter registration milestones while also recognizing that the fight is far from over.

Texas is consistently last in the nation when it comes to voter turnout and we have our conservative lawmakers to blame. Our state has a long history of voter suppression and Republicans in the Capitol continue to advance this history with bad legislation and voter suppression schemes.

Texas may have over 16 million registered voters, but the state also has a projected population of almost 30 million people. That’s why the organizations and individuals doing this work are so important to the movement. It’s also why it’s crucial that Texans elect progressives in November who are committed to fighting for voting rights protections in our state. These include:

There’s no excuse for Texas to be last when it comes to turnout. By electing candidates that are in favor of progressive voter policies like online voter registration, same day voter registration, making Election Day a national holiday, and so much more, our state can begin to put our suppressive past behind us and work toward a more promising and representative future.