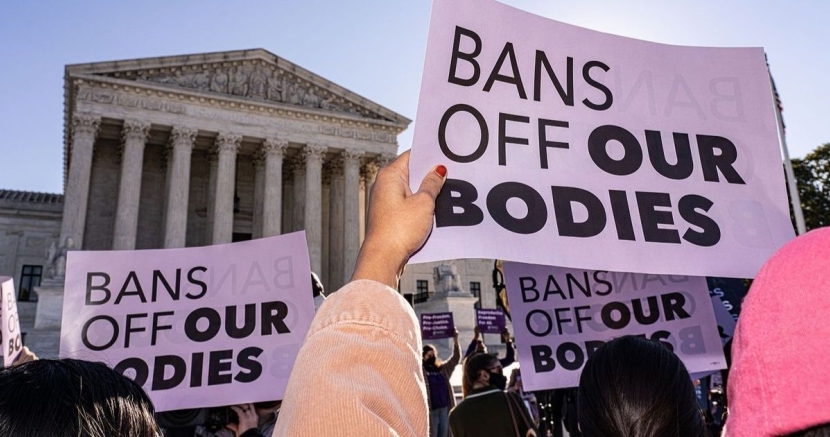 This week, the Supreme Court of the United States heard oral arguments on two challenges to Texas’ abortion ban (SB 8), the most restrictive anti-abortion law in the nation. Those on the ground in Texas seeking immediate relief from the effects of this blatantly unconstitutional abortion ban will be disappointed to hear that in three hours of arguments the word abortion was only mentioned 50 times. Instead, the justices limited their review to SB 8’s novel structure, which takes the duty of enforcement away from state officials and places it on private citizens.

On Monday, U.S. Solicitor General Elizabeth Prelogar stated in a response to a question posed by Chief Justice Roberts, “this seems like a novel case, and that's because it's a novel law.” In keeping with the novelty of Monday’s arguments, the day was filled with many new beginnings, including the 30th anniversary of the investiture of Justice Clarence Thomas, newly confirmed U.S. Solicitor General Elizabeth Prelogar’s first major case in the position, and the start of newly revised procedures meant to make the time allotted to each justice more equal.

The Supreme Court heard arguments from four different lawyers; U.S. Solicitor General Elizabeth Prelogar (on behalf of the DOJ), Jonathan F. Mitchell (said to have been the architect of the Texas abortion law), Texas Solicitor General Judd E. Stone II, and Marc A. Hearron (on behalf of abortion providers). The questions the Justices’ focused on were whether Texas’ enforcement strategy for the law is permissible and whether the United States has the right to sue Texas over the statute.

A majority of the justices, including conservative justices Brett Kavanaugh and Amy Coney Barrett, appeared likely to allow Whole Woman’s Health v. Jackson to go forward. Regarding the case brought by the Biden administration, the justices were more skeptical, citing the broadness of the argument and its implications.

The oral argument for the abortion providers’ challenge mainly poked holes in Texas’s argument that providers cannot seek pre-enforcement review of SB 8’s constitutionality, instead, they can only obtain federal court review after violating the law.

In suits seeking to overturn unconstitutional laws, courts don’t typically block the laws, they block their enforcement. During oral arguments, Justice Sonia Sotomayor stated that the point of SB 8 is to “find the chink in the armor” of Ex parte Young, a Supreme Court case from 1908 that allows federal courts to enjoin state officials (but not state courts) to conform their conduct to federal law if they are enforcing unconstitutional laws.

SB 8 complicates this by allowing any private citizen in the country to bring a lawsuit against abortion providers or those in Texas who help someone access an abortion. By removing the role of the state in enforcement, opponents of the law are unable to use the constitutional right to an abortion under Roe v. Wade as a legal defense. You can’t sue the state for violating your constitutional rights if they aren’t the ones doing it. So, while the precedent set in Ex parte Young allows for pre-enforcement review of unconstitutional laws, the Texas law uses private lawsuits as its enforcement mechanism, meaning that one must ‘violate’ the law before they are subject to seeking judicial review.

In a statement that doesn’t favor Texas, Justice Kavanaugh commented, “There's a loophole that's been exploited here or used here, which is the private suits are enforced by state court clerks or judges. So the question becomes, should we extend the principle of Ex parte Young to, in essence, close that loophole?” Kavanaugh goes on to say that the philosophy behind Ex parte Young would support the extension of the principle.

Texas Solicitor General Judd Stone doubled down on his assertion that the only way providers can challenge SB 8 is through violating the law. This is problematic because in the case of SB 8, there is significant risk in losing a case, including $10,000 in damages, no protection from repeated accusations, and even in the event of success, legal fees are not recouped. The heart of the discussion was on how these aspects of the private enforcement mechanism could create a chilling effect. This means that since the consequences of violating the law are so high it would ‘chill’ conduct, and in the case of SB 8, abortion providers would be forced to stop providing abortions, something that has already happened in Texas.

The court was especially concerned that this strategy could be replicated on other rights protected by the Constitution, such as gun ownership (Kavanaugh was particularly concerned for the fate of AR-15s) and freedom of speech. If the enforcement scheme is allowed to stand, it could negate the supremacy of federal law and “provide a road map for other states to abrogate any decision of this court with which they disagree,” according to Hearron.

General Stone argued that because of how it is enforced only Congress, not courts, have the authority to overturn Texas’ law.

Finally, since SB 8 is not enforced by state officials, opponents seeking to block it have struggled to name the right defendants. The Whole Woman’s Health suits list of defendants includes district court judge Austin Reeve Jackson. Justices Gorsuch, Alito, and Breyer found it threatening that judges were targeted in the abortion providers’ suit, and were concerned that it could set precedent for suing judges in common cases. Hypotheses were thrown out about who the proper defendants should be--county clerks, Attorney General Ken Paxton, or state judges.

Led by Solicitor General Prelogar, the oral argument for the federal government’s challenge centered around questions of federal supremacy.

In her opening statement, General Prelogar lays out her argument stating “Texas designed SB 8 to thwart the supremacy of federal law in open defiance of our constitutional structure. States are free to ask this court to reconsider its constitutional precedents, but they are not free to place themselves above this court, nullify the court's decisions in their borders, and block the judicial review necessary to vindicate federal rights."

Justices expressed concern for the Justice Department’s argument citing its broad authority but narrow applicability. Justice Alito even suggested that General Prelogar was seeking a rule for only one case. The court asked the solicitor general if she had any other examples of similar cases, to which she responded that due to the unusualness of the case there wasn’t. The fact that this law’s enforcement scheme is unprecedented is at the crux of the federal government’s argument. Importantly, the United States wants to sue Texas not because they created an unconstitutional law, but because they are blocking judicial review of the law.

Alito contended that the proposed response of blocking judges or clerks from acting on SB 8 lawsuits would open the door to similar actions in other circumstances. He asks how this overstepping of the federal government on state judges to stop them from hearing a case can be justified. The argument on behalf of the federal government eventually moved very close to the abortion provider’s argument that if SB 8 is allowed to stand, then no one’s constitutional rights are safe.

So where do things fall?

It seems Justices Gorsuch and Alito were the most supportive of Texas’ abortion ban, while the majority of justices seemed inclined to side with the abortion providers. This does not mean that SB 8 will immediately go away. The court would be ruling that abortion providers can sue, meaning that the case will return to the lower courts, enduring the back and forth of blocking and appealing, which could all be mute by the time December 1st rolls around and the conservative-leaning Supreme Court hears Dobbs v. Jackson Women’s Health Organization, a case that could overturn Roe v. Wade. If the Supreme Court rules in favor of the abortion providers, they would not be taking a stand for abortion access but simply sewing a patch on a constitutional loophole.