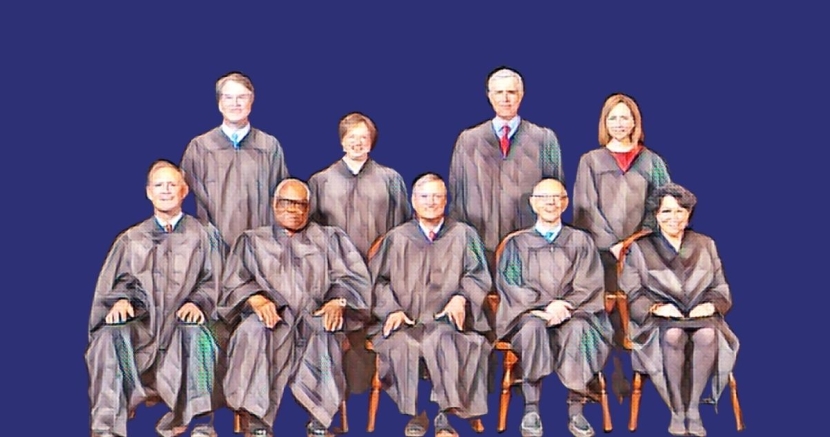 Wesley Story
The Court is set to rule on important issues over the next few weeks.

The United States Supreme Court is set to decide on cases addressing issues such as affordable health care, LGBTQIA+ rights, criminal justice, voting rights, immigrant rights, and more throughout May and June.

This case started in Texas and was spearheaded by our very own indicted Attorney General Ken Paxton in an attempt to take health care access away from millions of Americans. Central to understanding this case is the concept of severability – meaning if a portion of a law is deemed unconstitutional, then can that portion be struck down and the rest of the law be saved? The Court will decide (1) whether the individual mandate of the ACA is unconstitutional; and (2) if the individual mandate is unconstitutional, whether it is severable from the remainder of the ACA, or if that means the entire ACA must be struck down.

Based on oral arguments from November 2020, it looks like the majority of justices may not agree with the Republican plaintiffs in the case, which could mean the ACA will be spared. Read more on the case here.

In this case, the Court will decide whether private agencies that receive taxpayer-funding to provide government services — such as foster care providers, food banks, homeless shelters, and more — have a constitutional right to discriminate based on their religious beliefs.

The case calls into question the free exercise clause, and is an attempt to use religion as an excuse to discriminate. If the Court rules that these agencies, who are acting on behalf of the government, do not have to follow non-discrimination policies, it could could permit taxpayer-funded government programs to turn people away because they are LGBTQIA+, Jewish, Muslim, Mormon, or otherwise do not meet a government contractor’s religious requirements.

The Armed Career Criminal Act is a controversial law that imposes mandatory minimum sentences on repeat violent offenders. Under the Act, the petitioner in this case, Charles Borden, was given a longer sentence because a trial court judge ruled that all three of his prior aggravated assault convictions constituted violent felonies under the ACCA. One of those felony convictions, however, only required the prosecutor to prove Borden acted recklessly, not intentionally or knowingly. Because of that, Borden argues that ACCA does not apply.

The Court will decide whether the “use of force” clause in the Armed Career Criminal Act encompasses crimes with an intent requirement of mere recklessness. The case has broad criminal justice implications, as the ACCA is used in a number of cases and outlines mandatory minimum sentences that could be significantly reduced if the ACCA is not in play for a defendant.

This case began when Tarahrick Terry, in his early 20s, was convicted for possessing under 4 grams of crack cocaine. He was sentenced to 15 years imprisonment as a result of the racist 1986 Anti-Drug Abuse Act, which made the punishment and sentencing of crack cocaine one hundred times more severe than powdered cocaine. In 2018, Congress passed the First Step Act, which addressed the racial disparity in the 100:1 sentencing ratio by making recent sentencing reform policies retroactive. The Trump administration, however, only allowed those convicted of carrying large amounts of crack cocaine to be eligible for this sentencing reduction. In March, Biden ordered the Justice Department to reverse that position to allow lower-level offenders like Terry to be eligible for sentencing reduction.

However, the language of the First Step Act fails to address Terry’s level of offense, an obvious oversight from Congress. This could have unfortunate consequences for the thousands of low-level offenders waiting for retroactive relief to unfair sentencing practices of the late 80s and 90s. In this case, the Court will decide whether pre-August 3, 2010, crack offenders like Terry have a “covered offense” under the First Step Act.

Thousands of immigrants are currently living in the United States under a program that gives them temporary legal status because their home nations are in crisis. This is known as “Temporary Protected Status.” Petitioners Jose Sanchez and his wife were granted temporary protected status in 2001, and then applied to become lawful permanent residents in 2014. Their applications were denied after United States Citizenship and Immigration Services found that Sanchez was “statutorily ineligible” for adjustment of status because the agency claimed he had not been admitted into the US.

In this case, the Court will decide whether being granted Temporary Protected Status constitutes an “admission” into the United States.

After oral arguments, conservative justices on the Court did not appear ready to rule in the petitioner’s favor. If the Court rules that immigrants living in the country with Temporary Protected Status were technically never “admitted,” thousands of future applicants living in the US under this program could have their applications for permanent residence blocked.

The Court will decide whether two voting laws used in the 2020 Election violate the Voting Rights Act. The first is whether an entire ballot must be thrown out for voting in the wrong precinct. In this scenario, a voter who shows up at the wrong location on Election Day would not show up on the voter rolls, but they may insist that they are at the right location. That voter would be allowed to vote provisionally. However, if it turns out that they were not at the correct polling place, not even their presidential or statewide candidate vote would be counted. The second is whether non-family members or caregivers are allowed to collect and return early or absentee ballots for a voter.

Under the Voting Rights Act, if a voting policy disproportionately impacts voters of color, the policy is unlawful. In this case, opponents of these provisions argue that Arizona’s large rural Native American population rely on ballot collection services to vote since mail services are often unreliable or nonexistent. Moreover, the long distances from their homes to polling stations around the state is particularly burdensome, especially if they are misinformed about which location they should cast their ballot.

Conservative judges shoved in by Trump unsurprisingly repeated common talking points used to justify voter suppression. Justice Gorsuch asked, “Does Arizona have to wait for fraud to occur in Arizona using a practice before it can outlaw it?” Justice Kavanaugh also showed his hand in favor of the Arizona Republicans arguing to uphold the policies by offering a test of lawfulness based on whether other states have similar laws. With many Republican-led states jamming similar suppressive laws through their state legislatures, this would set a bad precedent for future anti-democracy laws and challenges under the VRA.

In these consolidated cases, petitioners are challenging a requirement that charities privately disclose their donor lists to the California State Attorney General’s office.

Advocates of the California law say that the disclosure aids in preventing fraudulent activities (such as money-laundering, and more legal but no less shady dark money contributions). Meanwhile, Americans for Prosperity, a well-known Koch funded and operated conservative organization, argues that requiring these disclosures interferes with the First Amendment and that even private disclosure can have a chilling effect on contributions (as donations are considered speech under the First Amendment). Given the makeup of the Court, it is likely that the California law will be struck down, at least as it applies to the petitioning organizations.

If Americans for Prosperity and other petitioners were to prevail, this could have a considerable impact on donations made to political campaigns and could increase the likelihood or the appeal of fraudulent or illegal activities taking place within the world of campaign finance and political donations. Advocates have called for Justice Amy Coney Barrett to recuse herself from this case because she received significant benefits from American for Prosperity’s campaign to put her on the bench. So far, she has refused these calls.

Other Cases of Note

Schools and sports associations argue that they should maintain the status quo of limiting compensation to student athletes only to scholarships and educational materials (laptops, books, equipment, etc.). Advocates argue that schools, coaches, and private companies like AAC/NCAA make billions each year off the backs of unpaid student athletes, who often come from low socioeconomic backgrounds and are often people of color.

In these consolidated cases, the Court will decide whether the NCAA is violating antitrust laws (Sherman Act) by failing to provide fair market compensation to athletes. Both Justices Kavanaugh and Thomas, alongside Justice Kagan, were critical of the NCAA’s practices during oral arguments. Debate suggests that justices could side in favor of the student athletes.

Mahanoy School District argues that they should be able to discipline students for speech off school grounds. The issue is particularly interesting after a full year of remote learning for students, where students may engage in cyberbullying completely “off-campus.” Opponents of school districts regulating off-campus speech point out concerns that it could be far-reaching and limit the free expression of students.

B.L., a public high school sophomore, posted a photo on Snapchat of herself and a friend with their middle fingers raised with the caption “Fuck school fuck softball fuck cheer fuck everything” after not making varsity. B.L. was suspended from her cheerleading team for a full year as a result of the snap.

Much of the debate centered around people who have never opened instagram contemplating the impact of social media, and raising a lot of “kids these days” discussion. To decide if a school has the right to discipline students in this case will be weighed somewhere between whether the student is physically on campus when the speech occurs and whether the speech is heard or has an impact on campus. Most justices seemed to agree that the school blew a teenager’s angst far out of proportion.