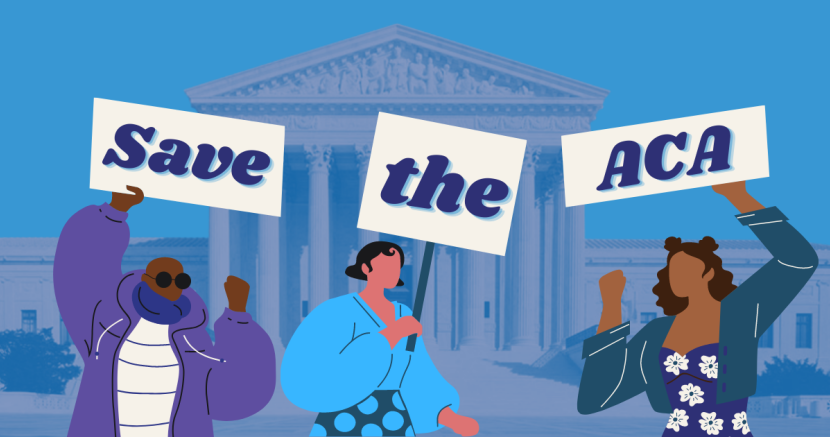 On Tuesday, just a week after Election Day, the Supreme Court heard arguments for the highly anticipated Affordable Care Act case, California v. Texas. With Amy Coney Barrett joining the bench and her public criticism of the ACA, many have expressed concerns that the 6-3 conservative majority on the Court will act to strike down the ACA. But after Tuesday’s hearing, it seems the law may still be safe.

The case started in Texas and was spearheaded by our very own indicted Attorney General Ken Paxton. While the COVID-19 pandemic has taken the lives of over 241,000 Americans, Republicans in our state and across the country have been working to take away affordable health care.

Their case rests on the deeply flawed argument that the whole of the ACA is unconstitutional because of the individual mandate, which is one small portion of the law. Based on Tuesday’s arguments in front of the Court, it’s looking like the majority of justices may not agree with the Republican plaintiffs in the case, which could mean that the ACA will be spared for the time being.

Here’s our breakdown of the case:

Central to understanding this latest challenge is the concept of severability – meaning if a portion of a law is deemed unconstitutional, then can that portion be struck down and the rest of the law be saved? Or does the whole law need to be invalidated by the Court? Texas Republicans and the Trump Administration are trying to argue that the individual mandate portion of the ACA is unconstitutional, and therefore all of the ACA must be struck down because there is no severability.

The ACA is made up of three major provisions – the guaranteed-issue which ensures coverage for pre-existing conditions, the community-rating which prevents individuals from being charged more because of their health status, and the individual mandate which required those who did not purchase insurance to pay a fee.

But this argument fell flat with the majority of the justices on Tuesday. Namely because Congress could have repealed the ACA in 2017, but didn’t. Congress didn’t, and still doesn’t, have the votes to repeal the ACA and Republicans shouldn’t be able to just use the Court to repeal the law because they don’t have the congressional support. Not only would the Supreme Court be circumventing the will of Congress by striking down the law, but the justices would also be overruling the will of the people, who elect the members of Congress and are most directly represented in the federal government by them.

Chief: On severance question, hard to argue that Congress intended entire ACA to fall when the same Congress did not even try to repeal the rest of the Act. I think, frankly, they wanted the Court to do that but that's not our job.

THE CHIEF JUSTICE IS NOT AMUSED.

As a result, it looks like while there could be a majority of justices who will rule the individual mandate portion as unconstitutional, Roberts and Kavanaugh seem likely to join their liberal counterparts in upholding the rest of the ACA. Since the penalty for the individual mandate portion is already set to zero, striking it down will have virtually no real impact, and the rest of the ACA should remain safe.

While we’ll likely have to wait until the spring to get a ruling, it’s crucial to think about how saving the ACA is critical for Texans.

How the ACA saves Texans:

Right now, Texans are already signing up for the ACA in the hopes that SCOTUS won’t strike down the whole law. At the same time, this week, Texas earned the bleak title of the first state in the US to surpass 1,000,000 COVID cases since the pandemic started. Texas has more total cases than Italy, meaning that Texas would rank 10th globally for total cases if it were its own country.

Major counties like Dallas, Tarrant, Bexar and Harris are seeing increases in COVID cases, but perhaps one of the most troubling trends is in El Paso, which is seeing a rapid increase in hospitalizations. In just the city of El Paso, there are more people hospitalized for COVID than in most states. Deaths are increasing so quickly in El Paso that the city now needs 10 mobile morgues.

Unfortunately, these numbers and increases are just part of the healthcare crisis in Texas. Texas has the highest rate of uninsured residents in the country.. As a result, one in five uninsured U.S. children live in Texas. The devastating effects of COVID have exacerbated the health disparities among us as Black, Indigenous and people of color are at a significantly higher risk of getting sick and dying from COVID. Now more than ever, Texans need accessible health care.

Health care is a human right, and the ACA helps bring us closer to making it accessible for all by making care more affordable. While some may have differences with the law, the answer for improving it is not to get rid of the entire thing, which would leave millions without health care.

In Texas, open enrollment is still happening, and Texans can apply for 2021 coverage by enrolling at healthcare.gov by Dec. 15. Enrollment information can be found here.