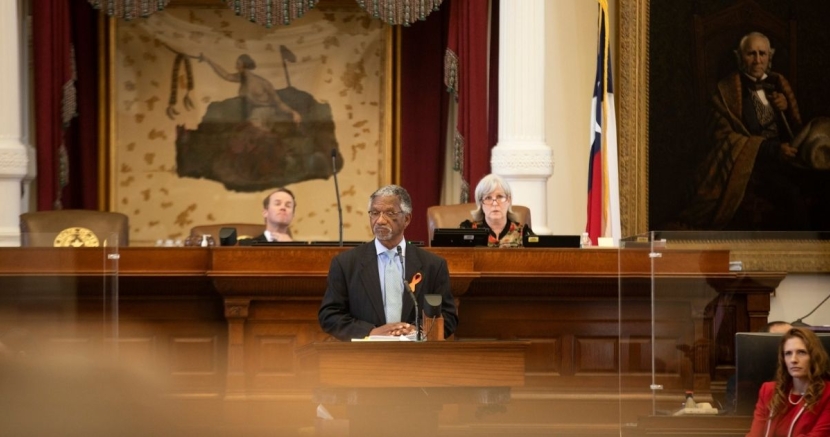 For Republicans at the Texas Legislature, discriminating against transgender children has been a focus of the 87th legislative session. Legislators have filed and pushed forward multiple bills that target trans kids across the state, from healthcare to school sports. Senate Bill 29 is part of this transphobic slate of bills, banning transgender youth athletes from participating in sports teams that match their gender identity.

However, LGBTQ+ rights advocates saw a glimmer of hope when SB 29 failed to advance out of the House Public Education Committee, chaired by Rep. Harold Dutton. The bill didn’t receive enough votes to pass, which meant the legislation was effectively dead before it even reached the House floor. In what’s been a dark session for LGBTQ+ rights, trans kids could finally have one moment of relief.

That’s until a few days later, when SB 29 was brought up again for a vote by Chair Dutton, a Democrat from Houston. It’s bad enough that this bill had another chance to pass. But Rep. Dutton confessed that this move was in retaliation for legislators killing his bill that would allow for a state takeover of Houston ISD.

Before the vote, Dutton said that he didn’t know how many children this bill would affect.

“I don’t know how big this problem is, and I wish I did, because I’d be in a better position to make this vote. But I can tell you this. The bill that was killed last night affected far more children than this bill ever will. So as a consequence, Chair moves that Senate Bill 29 as substituted be reported favorably to the full House.

After admitting that he didn’t know how many kids would be impacted by the anti-trans legislation, Rep. Dutton voted aye, joining the Republicans on the committee and moving SB 29 to the House. In other words, Rep. Dutton used transgender children as political pawns because he was upset that his own bill didn’t pass.

Thanks to Rep. Dutton’s political maneuver, tens of thousands of trans kids across the state are at risk of discrimination and exclusion from school sports.

Participation in athletics is a valuable part of childhood development, where kids learn about teamwork, social skills, and physical health. SB 29 would shut kids out on the basis of who they are. It will also open the door for invasive tests that require any children to “prove” their gender. If SB 29 passes, it will cause long-lasting damage to Texas children, a consequence that clearly wasn’t important enough for Rep. Dutton to care.

Currently, SB 29 is sitting in the House Calendars Committee, where Chair Dustin Burrows can choose whether to bring it to a vote on the House floor. You can call his office at 512-463-0542 to voice your opposition to the bill. If the bill does come up for a full vote, you can contact your representative and tell them to vote no.

The Democratic tent may be big, but we need to call out legislators who betray values of equality and human rights. When Rep. Dutton voted to advance SB 29, he put petty revenge over the lives of trans children across the state. Transgender Texans deserve better.