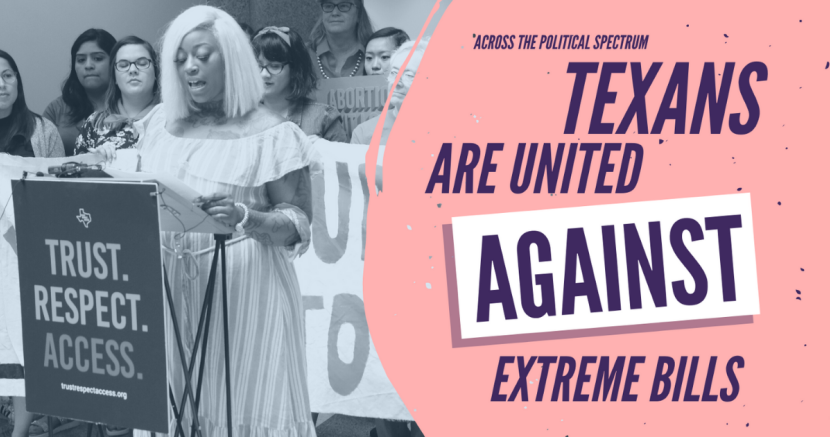 Today, the Trust Respect Access coalition released data from polling on abortion laws and anti-abortion bills in the Texas Legislature. The poll includes approval ratings as well as opinions on legislative priorities and House Bill 1515/Senate Bill 8, companion bills that would ban abortion at six weeks gestation, before many people even know that they are pregnant. The bills would also allow anyone to sue an abortion provider or anyone who helps someone obtain an abortion.

The poll jointly commissioned by Trust Respect Access partners offers insights by Texans from across the political spectrum. The following are key findings:

Across the political spectrum, Texans are united against extreme proposals

A majority of all poll respondents - including a majority of ideological subgroups - are opposed to anti-abortion measures currently being considered in the Texas Legislature. These unpopular proposals include HB 1515/SB 8, a six-week abortion ban that would also allow out-of-state people to sue Texans who help someone access abortion. HB 1515/SB 8 also includes a “rapist rights” provision that would allow rapists to sue a doctor who performs an abortion on their victim.

It is worth noting that it is rare to see Trump voters, Democrats, and Independents on the same side of an issue - this survey shows that the combined opposition transcends ideology.

Texans have differing ideologies and opinions, but when it comes to the anti-abortion measures currently under consideration at the Legislature, voters expressed opposition by wide margins. In the bipartisan survey, only 33% of respondents identified as Democrats while 41% identified as Republican and 27% as Independent. Even so, the poll found the combined opinions as follows:

Misplaced priorities by the Legislature

When asked what they think the number one priority should be for the Legislature, the top issue voters chose was ensuring a stable energy grid. That was followed by public schools and healthcare (covid response, hospitals, and vaccines). Texans do not believe that abortion should be a top priority in the Legislature.

To emphasize just how distant abortion restrictions are from Texans’ minds, when asked what the Legislature’s top priority should be, 17% responded “not sure” whereas only 10% said abortion regulations. Getting outranked by “not sure” is not good in any poll.

When breaking down responses to the poll by race, there is more support for abortion rights and a greater opposition to restrictions amongst Black and Brown Texans in many of the questions.

Among those who believe abortion laws should be less restrictive or stay the same, Hispanic/Latinos were at 63%, Black respondents at 58%, and a plurality of white respondents at 49%.

60% of both Hispanic/Latino voters and Black voters also oppose HB 1515/SB 8’s measure banning abortion, as do a plurality of white respondents at 46%.

Voters want the state to move on from this issue

By a combined total of 54%, voters say that Texas abortion laws should stay the same or be less restrictive, while only 33% are interested in more restrictions. This is consistent with findings from a Progress Texas poll in March that showed that 52% of Texans generally support abortion rights. If conservatives aren’t listening to the will of the voters, exactly who are they listening to?

Methodology: The survey was conducted by Public Policy Polling from April 23-24, evenly divided between landline and text message, and includes responses from 593 registered Texas voters with a +/- 4% margin of error.

You can take action by calling or emailing your representative and telling them to oppose HB 1515/SB 8: http://bit.ly/FindTXRep