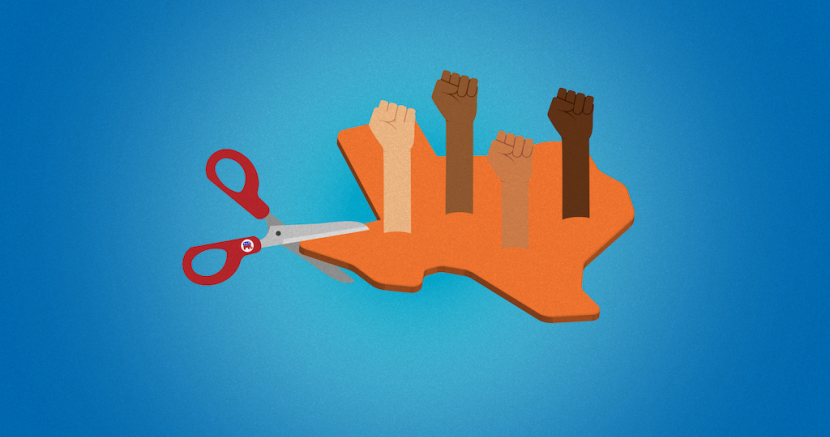 Latinos can win Texas with people power, with gente power

We must put an end to racial gerrymandering and Republican power grabs.

It might feel like Groundhog Day with the never ending legislative sessions of 2021. However, Texas’ third special session (beginning on Sept. 20) stands apart from the rest because it will finally tackle what many have been waiting for since last year’s census count: redistricting.

Unfortunately, redistricting has an unjust and racist history in our state which is why courts have ruled nine times in the past decade that Texas maps are intentionally discriminatory. This is why it’s more often called “gerrymandering,” or the manipulation of the political process through the drawing of district lines that favor one political party. Gerrymandering allows politicians to choose their voters instead of voters choosing their politicians. This is how Republicans have maintained electoral control in Texas.

Have you ever noticed the ridiculous looking maps that stretch from the Rio Grande Valley to Central Texas or from Central Texas to Houston? Republicans have deceitfully sliced and diced districts in Texas to disenfranchise voters of color throughout history because they know of the progressive power we hold in numbers across the state. This is called racial gerrymandering, and it’s supposed to be unconstitutional. Texas has lost a number of court cases concerning our state’s maps because of this issue. However,  partisan gerrymandering has been permitted by the Supreme Court, and it’s often hard to tell the difference.

With another redistricting session upon us and Republicans in control of the Texas Legislature, this trend of racial and partisan gerrymandering is expected to continue. And this year, there’s even more at stake.

Newly released Census data shows that in the last decade, Texas gained the most people of any state in the nation, with people of color making up 95% of that growth. And a majority of that growth was from Latino residents! Latino Texans are half a percentage point away from becoming the largest demographic group in our state.

Because of this growth, Texas gained two new congressional seats. But instead of increasing representation for the diverse communities responsible for that growth, Republicans are going to try to steal the seats for power. They know that Latinos turned out in record numbers during the 2020 election, and they’ve taken notice. With young Latinos making up a majority of the growth in Texas, it’s bad news for the GOP’s draconian, far-right agenda and they’ll plan to consolidate power through disenfranchisement and gerrymandering.

It’s a misconception to think that we are truly a red state and that Texas Latinos fall in step with Republican values. Our state has been hijacked by an extremist Republican minority block that is running around with racist scissors cutting up lines to cheat their way to power. But we can take our state back with people power, with gente power.

There are opportunities for public comments on the new maps legislators will be drawing. These comments, especially from Latinos on racial how gerrymandering hurts their communities, will be essential in future litigation to fight these maps in the courts down the line. The Brennan Center has listed excellent tips for making effective comments at a redistricting hearing.

Though Republicans continue to put up barriers to voting, we cannot let them win. Texans must organize within their communities to resist GOP voter suppression efforts.  Keep showing up to the ballot box with your friends and family members, and together, we can change the future of our state for the next generation.

We need more folks in power who actually represent our diverse state, especially in seats our communities were responsible for creating. Texas needs more progressive Latino leaders running for office to reflect our population growth. It’s time to step up and invest in ourselves. These politicians can’t keep making laws about us, without us!

As Hispanic Heritage month kicks off, why not celebrate by fighting for our community, our values, and taking back our state?