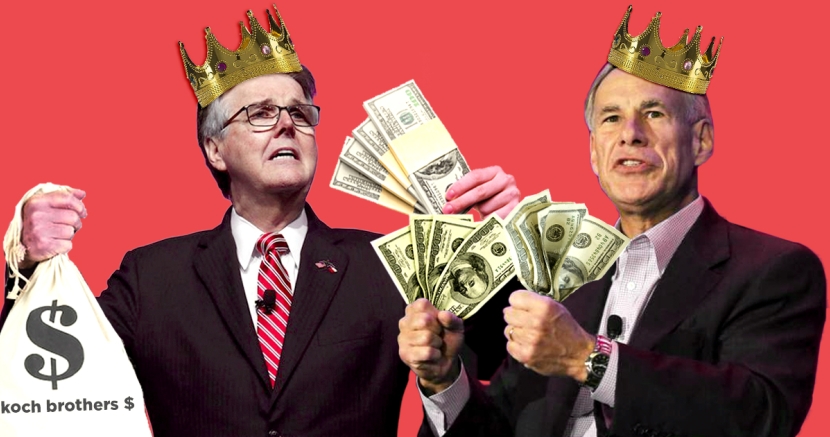 Corporate and special interests are influencing our state politics by putting profits before people, and Republicans are pushing their agenda.

State interference on local solutions should not be a partisan issue. But somehow, it’s become one.

Corporate and special interests are influencing our state politics by putting profits before people and Republicans are letting them.

The party “for small government” is seeking to increase the state’s power and limit the ability of local governments to make decisions for the communities they serve.

SB 15, and other state interference bills like it, are concerning for a number of reasons. They threaten strides that many Texas cities have made in protecting workers’ rights, implementing fair wage initiatives, and creating economic opportunities. SB 15 is especially broad and could prevent Texans from receiving paid sick, higher wages, safety standards, fair chance hiring, and a range of unknown legislative consequences. There is also concern that the bill could potentially override nondiscrimination ordinances passed by some Texas cities.

Texas is not a one-size-fits-all state.

Cities can decide what is best for their communities. Local governments are more in tune with the needs of the people who live there than state politicians and lobbyists. What works for people in a big city is not always the same as what works for people in a small town, which is why local governments exist — to pass laws that work for the people who live there.

Texas is a huge state. It’s bigger than many other countries and has 254 counties. Not everything is going to be the same in each of those counties. Voters view local government as their best opportunity to get what matters to them done. But now, Texas Republicans want to take that option away.

There are consequences to special interests’ influence on local democracy that impact the quality of life in our communities. We need to put people over profits. Special interests have too much power at the state level and they are leveraging it to limit the power of local communities — that includes overturning initiatives passed by citizens directly such as paid sick days or nondiscrimination ordinances.

Because political gridlock and corporate special interests have made it hard to get anything done at the state level, as Texans we must make our voices heard and demand change and accountability at the local level. For state lawmakers and special interest groups to try to take that option away from us is a complete disregard for the democratic process and a move akin to those of authoritarian regimes.

Everyone gets sick, but in Texas not everyone can take the day off to take care of themselves or a loved one.

Research shows businesses that offer paid sick days to employees have better employee retention rates. And for a low-income American worker, three days of lost pay is equivalent to an entire month’s grocery budget. Hard-working Texans should never have to choose between keeping their job or taking a sick day to care for a child or sick relative.

Paid sick days are not the only thing at risk.

Because SB 15 is so broad, other employment protections besides paid sick leave could be at risk.

While a previous provision in SB 15 explicitly said if turned into law, it would not supersede local nondiscrimination ordinances, a reworked version of the bill removed that language and could leave Texas exposed to discriminatory employment practices. Unlike 21 other states and the District of Columbia, Texas’ statewide employment discrimination laws don’t explicitly protect LGBTQIA+ employees.

Republicans are out of touch with the struggles faced by everyday working Texans.

Lawmakers who support these anti-local solutions bills are completely out of touch with the struggles faced by everyday working Texans. They have big corporations backing their decisions and don’t care about the everyday Texan struggling to get by. Instead, they’re choosing to silence local citizens’ voices and deny their rights in favor of special interests.