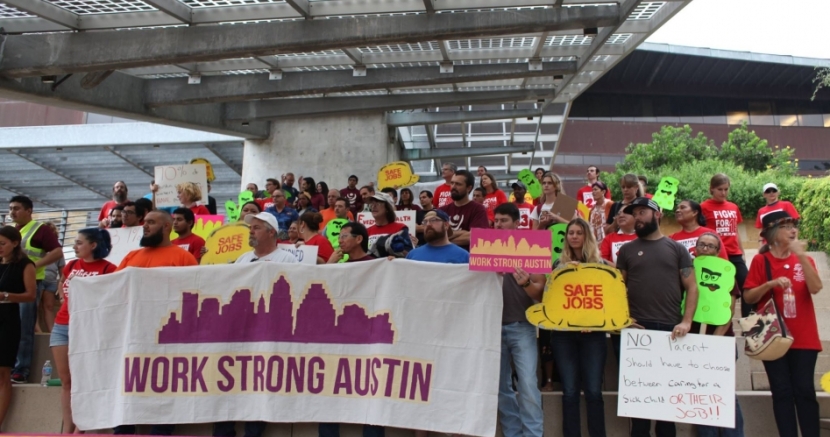 All workers should be able to earn paid sick days. And Austin is doing something about it.

Everyone gets sick, and every worker - no matter their job or how much they make - deserves the security that comes with access to earned paid sick days. But one in three Austin workers - and 40% of Texas workers - can’t earn even a single paid sick day to care for themselves or a loved one.

Paid sick days are essential to ensure all working people and families can live safe and healthy lives — without the risk of losing wages or being fired if they get sick or need to care for a seriously ill child or family member. If passed, Austin would join more than 40 cities, counties, and states around the country in guaranteeing this basic standard for all workers.

The proposed ordinance involved a thorough stakeholder process, with everyone at the table.

A coalition of community leaders, working families, local businesses, and advocacy organizations launched a campaign to put the city’s progressive values into action with a city-wide paid sick days policy covering all Austin workers. Work Strong Austin launched on Labor Day, and by the end of September Austin City Council unanimously passed a resolution to begin the rigorous process of developing the policy. After months of public input that involved a broad range of stakeholders, Council Members Greg Casar, Delia Garza, Kathie Tovo, and Ann Kitchen released a proposed ordinance to be voted on by Austin City Council on February 15. In a statement, Council Member Casar explained the robust vetting process that went into creating the policy:

“Our city’s conversation on paid sick days follows a national conversation that has occurred over the last 10 years. The United States is the only wealthy country without a national paid sick days policy. States, cities, and counties have been stepping up to fill the void, in order to make sure that no one has to choose between paying their bills or taking care of themselves or a loved one when they’re sick.

Conversations on a paid sick days policy for Austin have taken place locally over the last 2 years, since 2015. During that time, working people, small local businesses, and community groups of different sizes and scope have taken part in a rigorous process to come up with the ordinance you see here. This ordinance incorporates feedback from the stakeholder process we unanimously approved in September 2017, and includes feedback from conversations with both supporters of a citywide paid sick day policy and those less inclined to support. We have also uploaded a document outlining the long list of compromises between various interests that are included in this ordinance. We do believe what is presented here is, indeed, the result of delicate negotiation, balancing of interests, and addressing concerns.”

Paid sick days are good for public health, families, and the economy.

As the Center for Public Policy Priorities outlines, the proposed ordinance would not only benefit the Austin economy, but would also significantly improve the health and financial stability of all Austinites. The details of the policy include:

Paid sick days are about equality, economic, reproductive, and racial justice, and healthy and safe families and communities — these are all Texas values.

For a low-income family without earned paid sick days, going just 3.5 days without wages is the equivalent to losing a month’s groceries. In a city with the unfortunate distinction of being one of the most economically segregated cities in the country, ensuring all Austinites have access to jobs that include basic, minimum standards like paid sick days is critical to all affordability initiatives.