How Rick Perry Could Save the World as Energy Secretary 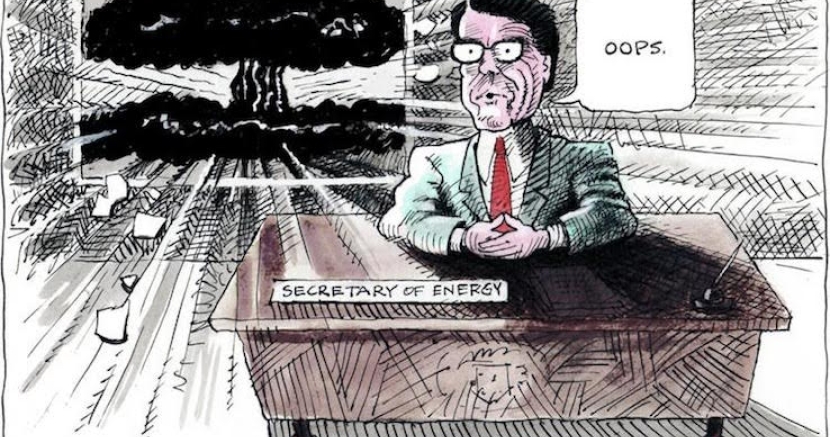 Glenn W. Smith
The last thing we want is Perry getting close to one button or another and asking a technician, “Hey, what does this do?”

Ed. note: The following column was originally published in the Austin American-Statesman. Image is an original illustration by artist M. Scott Byers.

The nomination has drawn jeers from some national pundits who pointed out that the Energy Department was the very agency Perry forgot he wanted to abolish in his memorable “oops” debate moment in 2011. The former governor’s rather undistinguished college career has also raised eyebrows as the department has in recent years been led by technical experts rather than purely political appointees.

A charitable review of Perry’s suitability for the job might use his recent light-booted turn on “Dancing With the Stars.” As a contestant, Perry certainly displayed a lot of “energy.” He wasn’t, after all, appointed to the Department of Talent.

When Americans close their eyes and wonder about who they’d like to hire to keep our nuclear arsenal safe, it’s a good bet that hypnagogic images of Rick Perry don’t float before them.

There’s also this: In the course of the 2016 campaign, Perry said “Donald Trump’s candidacy is a cancer on conservatism, and it must be clearly diagnosed, excised and discarded.” Certain issues of character are raised by this statement in light of Perry’s willingness to serve that very same “cancer on conservatism.”

If Perry believes what he said of Trump and accepts an appointment from him anyway, it’s fair to ask if Perry has the strength of character to head an agency like the Energy Department. It would be a little unnerving to have a raw opportunist’s hands hovering over our nation’s nuclear arsenal.

The late Molly Ivins always called Perry “Governor Goodhair,” and Perry does share the hair thing with the mystery-maned Trump. Maybe there’s a kind of fraternal fellow-feeling born of that. Cancer on conservatism Trump may be, but look at that hair! Esprit de coiffure!

Speaking of cancer, Perry’s leadership on another technically challenging matter — the state’s cancer research fund — was marked by corruption, cronyism and failure. His handling of the Texas Emerging Technology Fund was so awful his successor, fellow Republican Gov. Greg Abbott, abolished the fund.

Perry moved into the governor’s mansion after it was vacated by George W. Bush, who in 2001 moved to the White House. Perry then surfed a wave of rising oil prices to three re-elections. The Texas economy does love an oil boom, and a governor doesn’t have to do much but ride it out.

That our new nuclear czar’s political success depended upon a “boom” of any sort is not heartening. Maybe Perry will bring the same attitude to the Energy Department he brought to the governor’s office. That might be a blessing if all he does is see to it that our nuclear bombs are dusted regularly. The last thing we want is Perry getting close to one button or another and asking a technician, “Hey, what does this do?”

Let’s try looking at it this way: Imagine Perry was successful in his bid for the presidency. Then, as president-elect, he appointed Donald Trump to be his secretary of energy. No, that’s not any more comforting than the reverse, which is what’s actually happened. It was worth a try.

No matter how we cut it, the brilliant scientists and engineers in our most prestigious national laboratories – Los Alamos, Sandia, Lawrence Berkeley, Ames and Fermi – now work for Perry, a man who took to wearing eyeglasses in the hopes it would make him look more intelligent to a skeptical public. And Perry reports to Trump.

Perry could leave the nuclear stuff to the experts and focus on another mission of the Energy Department: developing and promoting clean energy sources. We can keep our fingers crossed, but we shouldn’t hold our breaths that a guy will do that when his entire political success was made possible by oil and gas.

Still, a last cheery thought: Given Trump’s cavalier attitude toward nuclear weapons — he proposed giving them to Japan, South Korea and Saudi Arabia — maybe Perry is just the right guy to be in charge of our own arsenal. With Perry in charge, there’s a chance that if the impetuous Trump moved to drop the bomb, the bomb won’t work. Perry saves the world!