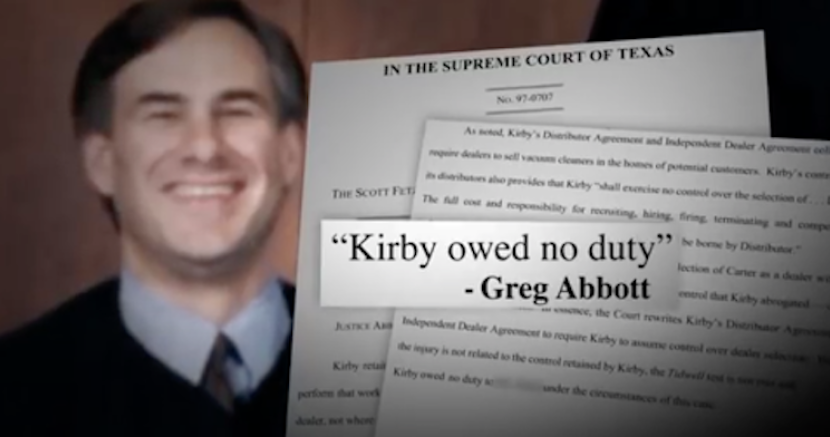 Ed Espinoza
As a Texas Supreme Court justice, a key Abbott dissent does not align with “eliminating all rapists.”

The infamous six-week abortion ban that has the whole country talking about Texas in a negative light (again). Earlier this week, when a reporter asked Gov. Greg Abbott why a rape survivor should be forced to carry a pregnancy to term, Abbott responded:

“Texas will work tirelessly to eliminate all rapists.”

Reporter: Why force a rape or incest victim to carry a pregnancy to term?

Gov. Greg Abbott (R-TX): "It doesn't require that at all, because obviously it provides at least 6 weeks for a person to be able to get an abortion." pic.twitter.com/Mbx5JVHG1D

Except, as a justice on the Texas Supreme Court, he didn’t do that at all.

Back in 1998, in Kirby v. Kristi, the court took up a case in which a door-to-door vacuum cleaner salesman sexually assaulted someone in her home. The case addressed whether the Kirby Vacuum Company was at fault for not performing a routine background check on a contractor who had a record as a sexual predator and was on probation.

The case was appealed and the Texas Supreme Court ruled 6-3 in favor of Kristi, finding that the vacuum company was to be held responsible for the circumstances.

Greg Abbott disagreed with the ruling.

As one of only three justices to dissent, he wrote the following opinion:

“...the Court rewrites Kirby’s Distributor Agreement and Independent Dealer Agreement to require Kirby to assume control over dealer selection. Because the injury is not related to the control retained by Kirby,” Abbott closed, “Kirby owed no duty to” the woman “under the circumstances of this case.”

He wrote this even in light of Kirby having changed its practices prior to the Supreme Court ruling! But Abbott still wasn’t budging.

In her 2014 campaign for governor, Wendy Davis summed it up the following ad which was rated true by PolitiFact:

Abbott defends his position by saying that "Obviously, it provides at least six weeks for a person to be able to get an abortion.”

Not exactly. Many don’t know they’re pregnant at that time, at best the timeline is less than two weeks, and some doctors won’t even perform an abortion until 8 weeks in the process.

"He speaks from such a place of deep ignorance, and it's not just ignorance. It's ignorance that's hurting people."

"I'm sorry we have to break down Biology 101 on national television, but in case no one has informed him before in his life, six weeks pregnant means two weeks late for your period," Ocasio-Cortez said. "And two weeks late on your period ... can happen if you're stressed, if your diet changes, or for really no reason at all. So you don't have six weeks."

Progress Texas covered this issue during the 2014 campaign for governor, and when Abbott was asked about this ruling at the time he simply responded: “the opinion speaks for itself.”

Well governor, for once we agree.