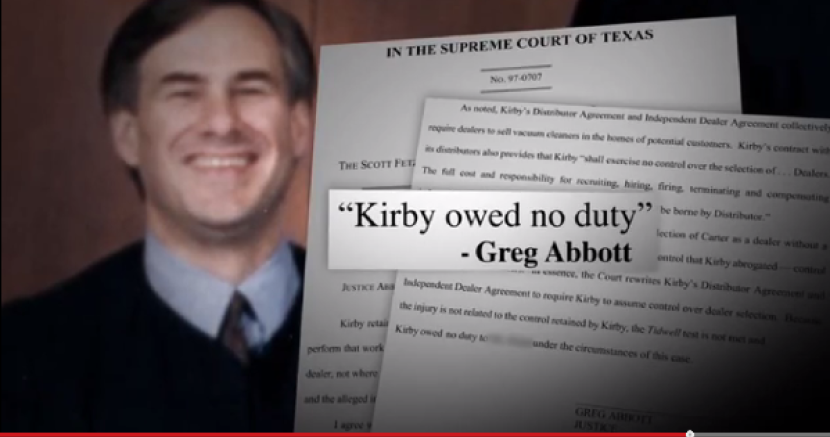 But that's not stopping Abbott from doubling-down, even after the company found at fault changed its practices before Abbott's bad judgment.

Greg Abbott's dissenting opinion shows terrible judgment, and now he's doubling down on that bad judgment because he can't admit he is wrong.

Is it Reasonable for a Company Requiring In-Home Sales to do Background Checks?

The Kirby Company sold vacuum cleaners through independent contract distribtors. Kirby had an agreement with those contractors that said:

Kirby/Abbott argued that calling "not it" on having to do background checks waives them of any reasonable duty to act responsibly.

Fortunately, Kirby/Abbott lost. A 6-3 bipartisan majority of the Texas Supreme Court upheld decisions by lower courts that ruled that because Kirby requires vacuums be sold inside a home, they don't get to waive the responsiblity of things like background checks. From the majority's opinion:

As previously noted, it is undisputed that Kirby directed its distributors that its Kirby vacuum cleaners be marketed solely through in-home demonstration. It was Kirby’s retention of control over this detail that gave rise to the duty to exercise that control reasonably. That Kirby’s agreement with the distributors allowed the distributors to independently contract with dealers does not excuse Kirby from the duty to act reasonably with regard to the detail — required in-home sales — over which it did retain control.

There's an important footnote in the majority's opinion (bottom of page 6). As a result of a similar 1992 ruling against Kirby by the North Dakota Supreme Court, the Kirby Company:

There was no reason for Greg Abbott to rule the way he did in 1998.  It's even stranger that 14 years later he still won't admit he was wrong.

Too proud and too stubborn - no wonder Abbott has such bad judgment.