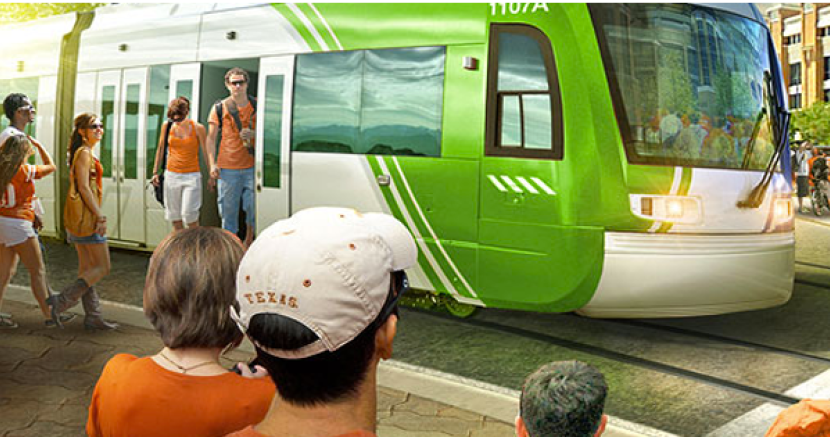 We support Austin's local bond proposition, commonly known as Prop 1 - the plan for starting our local rail transit. We support Prop 1 because it is a strong first step towards solving our long-term traffic solutions.

As the Austin Chronicle wrote in their endorsement for Prop 1:

"We believe it's a good first [rail] line that responds to the city's projected growth; we also believe it's a potentially fatal mistake to wait for a perfect consensus (which is never possible, anyway)."

We agree with the Austin Chronicle, along with countless other progressive groups, that Prop 1 sets us on the path we need to go to address Austin's long-term transportation needs.

1. Prop 1 Starts a Vision for the Future

We're tired of political inaction. We want to see something get done.

The challenges faced by Austin's growth cannot be met with any one policy shift, or any one candidate. Managing our growth will require any number of new policies - transit planning is just part of that puzzle. Affordable housing, shifting our city's supply of energy, raising commercial property taxes, expanding homestead exemptions, and improving health care access are other pieces of the puzzle we need to complete to manage our city's growth. As one writer put it:

...real property tax reform needs to come from removing commercial property tax exemptions and addressing existing housing supply shortages, not by excising needed infrastructure for our City.  There are means of property tax relief that do not preclude important investments in our future.

Above all else, Prop 1 is a plan that gets us started towards the path to a better future for Austin.

We endorse Austin's local Prop 1, and encourage you to vote for it on Election Day.

2. Better for the Environment

Ridership numbers and costs matter, but the impact of our proposed traffic solutions on the environment should be an equally important concern. It's telling that the Texas League of Conservation Voters, Clean Water Action, Austin Environmental Democrats, the Austin Regional Group of the Sierra Club and Environment Texas have all endorsed Austin's Prop 1.

Austin is the 4th worst city in America for traffic, worse than New York City. We can't fix a problem of that magnitude overnight, especially so long as Republicans in charge of the state of Texas continue to under-invest in critical transportation improvevements throughout the Central Texas region.

Absent a magic wand, any proposed solution to improve traffic must be seen as part of a long-term series of solutions Austin will have to implement over many years. While we implement long-term rail solutions, we can't ignore critical short-term needs our city faces that will be financed by Austin's Prop 1.

The $600 million for the light rail will give Austinites another option for travel. But the $400 million for road planning will also go a long way, providing improvements that include:

While there are some pro-transit progressives who oppose Austin's Prop 1, the vast majority of money and manpower leading the fight against Austin's Prop 1 is coming from conservative donors who are politically aligned with the Tea Party. Naturally, the Tea Party opposes rail, too. These are the groups that fight tooth and nail, every day, to limit investments in Texas' future. Like with so many other issues, all you have to do is follow the money:

Much is made about the $600 million price tag for Austin's proposed rail line. But as the Austin Chronicle noted, the initial costs include a bridge across Lady Bird Lake - arguably the most expensive component of any proposed rail system for Austin - and every year we wait it becomes more and more expensive to build rail.

Other key facts on cost include: