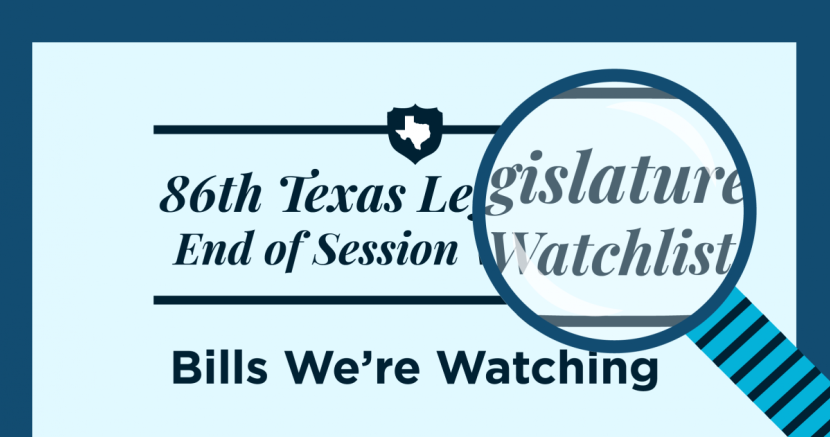 Wesley Story
Sine die is upon us. Here’s what we’re watching for the last week of session.

We’re about one week out from sine die, which means there’s a lot to keep up with as the Texas Legislature attempts to get through as many bills as possible before the end of the session.

Here’s our list of the good, the bad, and the ugly bills we’re watching for the last week of the legislative session.

HB 650 is a comprehensive bill that addresses issues related to the conditions of incarcerated women in Texas. The bill would prevent the shackling of women after their pregnancy is confirmed by a medical professional and would require the Texas Department of Criminal Justice to offer up to 10 free feminine hygiene products to women each day.

The Senate unanimously passed the bill last week and it now awaits Governor Greg Abbott’s signature before it can become law.

HB 744 would implement the top recommendation from the state's Maternal Mortality Task Force, allowing low-income moms to maintain their Medicaid insurance for 12 months after giving birth. Under current state policy, Medicaid for moms cuts off two months after delivery, leaving many Texas moms with limited health services during this critical time.

The bill was voted out of the House and is waiting to be heard in the Senate.

Rep. Jeff Leach (R-Plano) has carried HB 16, which would impose civil fines on abortion providers if they don’t care for a baby that is “born alive” during an abortion procedure. The problem is, that simply doesn’t happen. This bill perpetuates the myth that fetuses are born after abortion procedures and physicians are not helping them.

The bill would allow physicians to be sued and the Attorney General to investigate and scapegoat them. HB 16 seeks to solve a nonexistent problem and is simply meant to advance a false narrative that targets and demonizes abortion providers.

In a passionate speech against the bill, Rep. Donna Howard (D-Austin) said, “The aim of HB 16 is clear – further stigmatize abortion, misinform the public, intimidate physicians, and interfere with a woman’s ability to seek medical care. To debate this bill or to try to amend it would legitimize its false narrative. As a nurse, I’m insulted… as a mother and a grandmother, I am heartbroken for those families who will suffer as a result of this punitive bill.”

HB 16 will now go to the Senate, where Texans have another opportunity to speak against the bill.

SB 1033 would force women to give birth to non-viable fetuses by doing away with an exception that currently allows pregnant women facing severe fetal disease or disability to undergo an abortion procedure.

The bill has been voted out of the Senate and is now making its way through the House.

After hours of testimony against the bill on Wednesday, SB 9 is likely to be voted out of the House Elections Committee. The bill will likely sit for a couple of days and then make its way to the House floor for a vote sometime next week.

SB 9 is an omnibus anti-voter bill that would prevent eligible voters from voting and create a culture of fear around elections. In an ironic turn of events, the way the House Elections Committee conducted testimony on the bill is exactly what the bill would do. The committee, and more specifically Chairwoman Stephanie Klick (R-Fort Worth), only opened registration for testimony for 30 minutes from 8 to 8:30 a.m. People who traveled from all over Texas to testify were unable to. Just like how Chairwoman Klick silenced Texans’ voices, the bill would do the same by keeping people from the polls.

SB 9 is meant to keep those in power in power while making it harder to vote for minority Texans, older Texans, Texans who need assistance, and younger Texans. Instead of using this legislative session to protect the vote, Texas Republicans are pushing a dangerous assault on voting rights with SB 9, which would also weaken safeguards on private information and give indicted Attorney General Ken Paxton access to the voter rolls where he could further threaten and intimidate voters of color.

SB 22 is a blatant attack on local health care. The bill would prohibit state and local governments from partnering with local health care agencies, including those that provide routine and lifesaving care such as birth control, STI testing and prevention, HIV prevention and outreach, as well as breast and cervical cancer screenings.. The bill seeks to interfere with local communities’ health care decisions and would prevent many Texans from getting the health care they need.

The bill undermines local solutions and takes away the agency of communities.

SB 22 has already been voted out of the Senate and is scheduled for a House vote on Friday.

SB 1978 twists the definition of religious freedom and uses it as an excuse to discriminate against queer Texans.

Last week, the House LGBTQ Caucus killed a similar piece of legislation. However, Sen. Hughes revived the discriminatory effort in the Senate. SB 1978 was fast-tracked through committee and pushed to the floor in a matter of days with little notice and no testimony, completely circumventing the entire democratic process.

This bill, which conservatives have deceptively coined the “Save Chick-fil-A” bill, has nothing to do with Chick-fil-A. Instead, the bill is an excuse to take power away from local governments and would allow Texans to cite their faith in order to discriminate against people because of their gender identity or sexual orientation.

SB 15 was originally filed to limit cities’ ability to regulate employment policies by putting profits before people. While Creighton’s SB 15 does not look like it’s going anywhere, a package of bad bills filed by Creighton to accomplish the same thing has seen movement. The bills that make up this preemption package include SB 2485, SB 2486, SB 2487 and SB 2488.