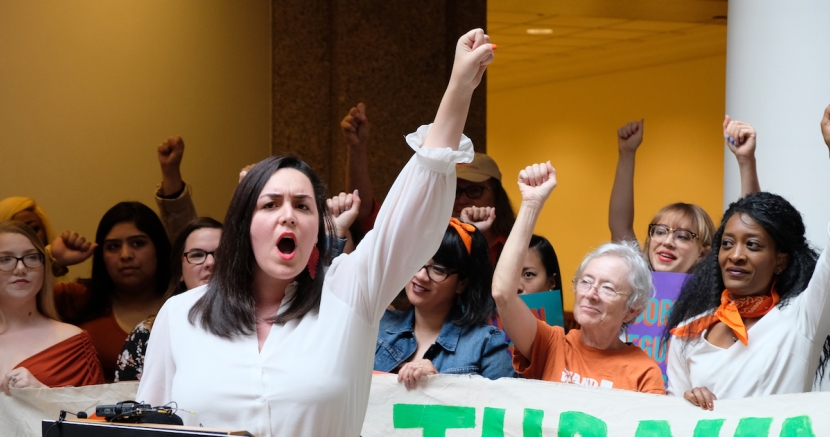 Abortion advocates fight lies at the Capitol through stories

Photo by Steven Garcia/Planned Parenthood Texas Votes
Texans who have had an abortion tell their truth to combat extremist lawmakers: Texans deserve trust, respect, and access to abortion services.

Texans who have had an abortion shared their powerful stories at the Capitol this week in an effort to promote the truth – that Texans have abortions in a variety of situations, and lawmakers are spreading lies to promote an extremist agenda.

The Trust Respect Access Coalition brought abortion advocates from across the state together to rally in community.

This session alone, more than 30 anti-abortion bills have been filed by extremist lawmakers that could harm Texans. Lawmakers should be focusing on improving the lives of Texans, including caring for our uninsured populations and tackling our maternal mortality problems, yet they continue to attack Texans’ decisions instead.

“The barriers women face toward accessing abortion care have not improved. They’ve only continued to pile on,” said Kayla Lashaee Moye, who has had an abortion. “I’m just so tired of not being trusted and respected as a woman, and more importantly as a mother.”

Some of the most blatant extremists at the Capitol include Representatives Matt Krause (R-Fort Worth), Jeff Leach (R-Plano), Morgan Meyer (R-Dallas), Matt Shaheen (R-Plano), and Jonathan Stickland (R-Bedford). While this is far from a comprehensive list, these Republican men have launched multiple attacks on abortion rights and access and progressive organizations are banding together to vote them out in 2020.

We need lawmakers who listen to and trust their constituents, including those who seek abortion services.

“People should know that there are a lot of reasons women should always have the right to choose,” said Erika Hawkins during her story. “Be it domestic violence, economic abuse, or simply just because of the situation, abortion care in Texas should and continue to be accessible and readily available.”

People who have abortions deserve trust, respect, and access, and advocates made that known through a chant led by Claudia Yoli with Deeds Not Words at the end of the event.

“I am somebody and I deserve full equality. Right here. Right now.

My mother is somebody and she deserves full equality. Right here. Right now.

My daughter is somebody and she deserves full equality. Right here. Right now.”

Join us in speaking out against extremist lawmakers rolling back reproductive rights and sign on to our petition today!