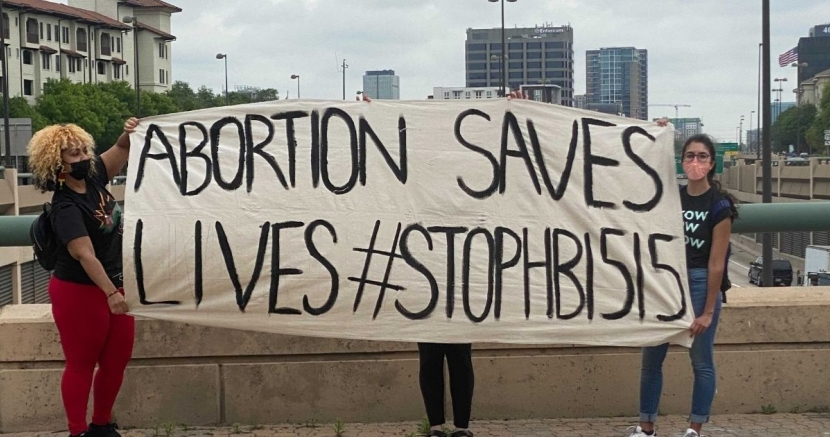 Today, abortion activists from across the state joined together to call on Texas lawmakers to stop House Bill 1515, which would ban abortions before most Texans even know they’re pregnant.

Advocates dropped banners in Austin on the 38 1/2 St. bridge above I-35, in Dallas on 75 at Haskell, and in Houston above Highway 59 on the Montrose bridge to remind legislators and onlookers that abortion saves lives.

THREAD: Today, abortion activists from across the state are joining together to call on TX lawmakers to #StopHB1515.#HB1515 would:
- ban abortion before most know they’re pregnant
- allow ANYONE to “enforce” restrictions, meaning a rapist could sue their victim’s doctor #txlege pic.twitter.com/Um3czvdNWf

HB 1515 is an unconstitutional six-week abortion ban that would set a dangerous precedent for the rest of the nation if passed. Roe v. Wade is still the law of the land, but extremist politicians are hoping to challenge existing law with this dangerous bill.

Not only is HB 1515 a ban on abortion before most people know they’re pregnant, but it would allow for anyone to "enforce" the rule, meaning a rapist could sue their victim’s doctor and reap a cash reward or an anti-abortion extremist on the other side of the state could sue a mother for driving her kid to get an abortion.

Texans deserve better than these attacks on our rights and attempts to push abortion care further out of reach. If passed, HB 1515 would be one of the most extreme abortion restrictions in the country. Legislators must protect access to essential health care for Texans, and that includes abortion.

You can take action by calling or emailing your representative and telling them to oppose HB 1515: http://bit.ly/FindTXRep