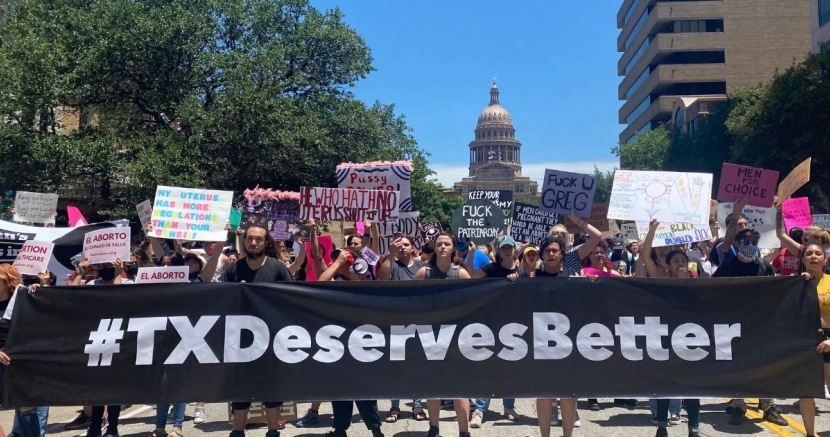 4 ways you can continue to support abortion access in Texas

Gov. Abbot’s six-week abortion ban will be challenged in court, and abortion is still legal in Texas.

The decision to restrict abortion access was one of the Texas GOP’s most extreme misplaced priorites during this 87th legislative session.

Weeks before the session wrapped up, Gov. Greg Abbott signed Senate Bill 8, a six-week abortion ban, into law. Not only does the bill attempt to ban abortions as early as six weeks of pregnancy, it also would allow anyone to sue a physician or anyone else who helped somone attain an abortion after six weeks.

While SB8 is a terrible piece of legislation, the law itself does not go into effect until Sept. 1, 2021, and it will inevitably get challenged in the courts before then.

Abortion bans like SB8 are cruel tools by extremist legislators meant to confuse Texans about their health care rights. Don’t forget to remind family and friends that abortion is health care and it is still legal in Texas.

This six-week abortion ban is unconstitutional and others like it have been struck down by federal courts across the nation. Roe v. Wade is still the law of the land and regardless of whatever bill Gov. Abbott signs, no law will stop abortions from happening. For the most up to date news on the fight against SB8 and other anti-abortion legislation, make sure to sign up for our weekly emails and follow us on social media.

Abortion funds serve to provide direct financial assistance and aid to people seeking abortions. The average cost of a first trimester abortion is around $500, and will increase to $850 during the second trimester. Texas abortion funds cover the costs of things such as the cost of the abortion procedure, the cost of an ultrasound (which under Texas law is required to be performed by the same physician performing an abortion), and travel and lodging. Here are some of Texas’ wonderful abortion funds:

Fund Texas Choice provides direct financial support to cover travel and lodging costs associated with seeking an abortion. Abortion procedures in Texas last a minimum of two days due to the State’s mandatory 24-hour waiting period and longer appointments can last a week.

CASN provides free assistance to people seeking an abortion in Houston like rides to and from a clinic, bus tickets, gas money, childcare support, compassionate care, and in limited cases can provide procedure funding.

The Safe Transportation Access Network & Doulas (STAND) is a program that was created by the Bridge Collective in July 2013 when Texas law-makers passed HB2,  a bill that drastically reduced access to abortion clinics for people across the state and beyond.

Contactless bake sales, craft sales, virtual workshops, art sales, and garage sales have all been held with the proceeds directly going to various abortion funds across the state. Participating in the National Network of Abortion Funds annual Fund-A-Thon  is a great way to virtually raise money for regional abortion fund here in Texas. Holding an abortion fundraiser is a great way to ensure people are able to receive abortion care in Texas, while also gathering your community together to support an important cause.

4. Sign up to volunteer at a reproductive justice organization

There are organizations all across Texas that are working to secure abortion access for all, and they are always searching for new volunteers. Volunteer at Jane's Due Process to help with their text and phone hotlines, or if you are an attorney you can volunteer to represent teens in judicial bypass hearings. Volunteer with the Afiya Center to help work towards ending the reproductive oppression of Black women in Texas. Volunteer and become a changemaker with Deeds Not Words to help fight for women’s social and economic opportunity, access to reproductive health, freedom from sexual assault, and equal representation in every space and at every level.