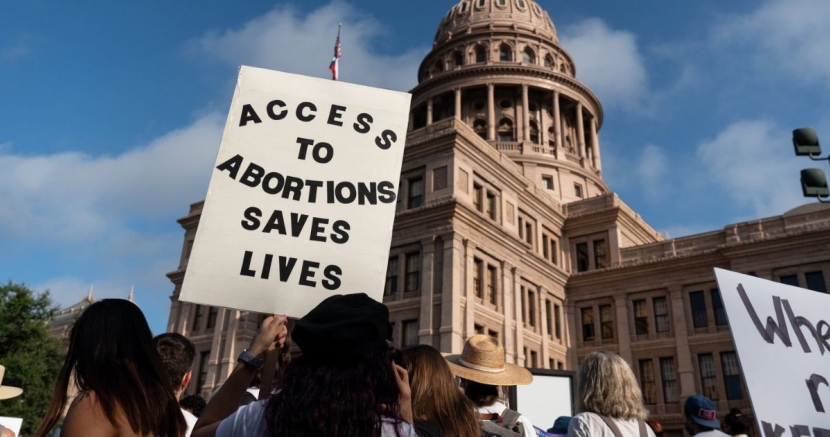 Emily Clark
Texas Democrats have fought for years to eliminate the tampon tax. Republican support for it is a distraction from abortion bans.

It’s been two months since the U.S. Supreme Court overturned Roe v. Wade. While progressive leaders and organizations scramble to keep up with the ever-changing landscape that is Texas abortion law, Texas Republicans have been mostly silent on the issue lately.

First, Republicans stripped us of our bodily autonomy and celebrated. But now, they’re trying to avoid the issue. Maybe it’s because they saw what happened in Kansas three weeks ago.

Typically understood as a Republican-dominated state, Kansas voters took an unexpected turn by voting 59-41 to support maintaining their right to abortion. Considering 78% of Texas voters think abortion should be allowed in some form, that news couldn’t have been welcome for sitting GOP officials.

Had the abortion ban been presented to Texans as a ballot choice, we wouldn’t be where we are today. While the abortion ban won’t be on our ballots, the officials who worked to pass it will be. And they’re getting scared.

One of the 19 yea votes that pushed the state’s abortion bans through the Senate during the 2021 legislative session was Sen. Joan Huffman, R-Houston. Last week, Huffman suddenly came out in support of removing the state sales tax from tampons and pads.

No, the proposal wasn’t her idea. Texas Democrats, led by state Rep. Donna Howard, have proposed legislation to eliminate the “tampon tax” every legislative session since 2017. Huffman was a part of the Senate Finance Committee when Democrats first proposed the legislation in 2017, and, coming as no surprise to us, the bill died there.

Huffman didn’t cite Texas Democrats’ past efforts in her announcement; neither did GOP Texas Comptroller Glenn Hegar when he joined her in support of the proposal. He commended Huffman for “taking bold and decisive action for the women of Texas.”

Real “bold and decisive action” would have been voting against the state’s cruel abortion bans. Huffman is pandering; she’s on the ballot in November and is desperately trying to gain votes from the same people she deprived of reproductive rights.

Hegar is no better. He didn’t support repealing the tampon tax until his Democratic opponent, Janet Dudding, began campaigning on the issue. Back in February, Hegar’s office rejected a request from advocates to refund the sales tax on tampons they bought.

Given Hegar’s extremely recent history of being against eliminating the tampon tax, we can’t attribute his sudden change in opinion to anything but panic.

Huffman and Hegar don’t care about our reproductive rights or whether people with a period have to pay more to live. They would have supported the sales tax repeal years ago if they did. They would’ve worked to expand Medicaid, increase abortion access, and encourage nonprofit health care facilities like Planned Parenthood. Huffman and Hegar’s announcement is a power play.

To further prove the point, let’s take it back to 2013 when the state Senate debated a 20-week abortion ban. Abortion rights protesters gathered in mass at the Texas Capitol, hoping to deter the bill. Before attendees could enter the Senate gallery to view the debate, Texas Department of Public Safety (DPS) officers confiscated tampons and maxi pads from people’s bags.

The reasoning? The DPS feared people would use the hygiene products as projectiles to throw from the gallery onto the Senate floor. The kicker? Guns were still allowed.

The confiscations continued until former Sen. Kirk Watson, D-Austin, convinced the DPS to stop. Huffman and Hegar were both Senators at the time; they did nothing.

Gov. Greg Abbott joined Huffman and Hegar in supporting the tampon tax repeal last Friday. He’s been in a statewide office for decades yet didn’t start expressing interest in tampon sales tax until now. He knows Texans are angry about the state’s abortion bans, and he’ll do anything to gain votes back.

The timing of the three GOP leaders is strategic. On Aug. 25, 2022 the Texas abortion trigger ban officially goes into effect. The law outlaws abortion from the moment of fertilization, without exception for rape or incest. It also makes performing an abortion a felony and adds a fine of at least $100,000 for each “offense.”

Abbott and fellow Texas Republican leaders haven’t been bragging about the abortion ban since SCOTUS overturned Roe. They’re only bringing up the tampon tax to distract voters and reporters from their conduct, and reporters need to frame GOP efforts as such.

We’ve seen too many articles ignoring the timing of Abbott, Huffman and Hegar’s announcement. And while most reports at least mention Texas Democrats’ efforts to eliminate the tampon tax, hardly any include that information in the headline.

With the constant whirlwind of news Texans hear each day, headlines are the first, and sometimes only, thing readers see. Without being straightforward about Abbott, Huffman and Hegar’s intentions, reporters deprive voters of vital information.

These GOP incumbent candidates know abortion supporters are the majority — the polls prove it. Around 80% of Texas voters think abortion should be permitted in some form.

Together, we have the strength to form a massive political resistance. Join the ROEvolution at roevolution.org and see our ROEvolution resource guide for more information.