Did you know? Texas has two statewide elections in May 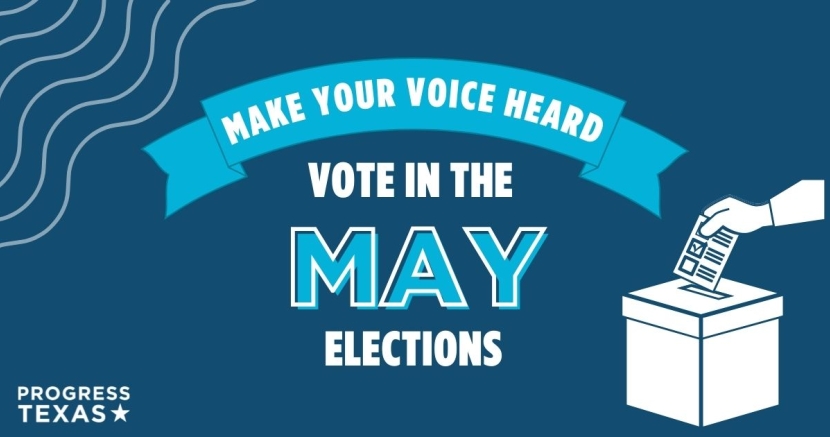 What’s on your ballot, when can you vote, and why do you have to vote so often?

Note: Scroll down for information on upcoming May elections.

As wild as nine elections may sound, this is no unprecedented occurrence. Even numbered years bring a whirlwind of voting in Texas. With the way Texas election laws are designed, certain elections are prohibited from being consolidated into one ballot. That’s how we ended up with both a primary runoff and constitutional amendment election in May. The thing is, the more elections there are, the less likely voters are to participate. Overlapping and successive elections guarantee confusion for new and longtime voters, on top of Texans not having the time to engage in politics all year round.

More elections means more deadlines, more races, and more mayhem overall. To help alleviate some confusion, here are key races and deadlines to watch out for in upcoming May elections:

What’s on the ballot for May elections?

Both of the propositions on our ballot in May are property-tax related. Since Texas has some of the highest property taxes in the country and a growing population, these constitutional amendments could serve as relief to some residents.

State of Texas Proposition 1 - If approved, this proposition would unfreeze school property tax bills for people who are disabled or over 65 so that their school tax is lowered year after year as state funding for school districts increases.

State of Texas Proposition 2 - If approved, would increase the residence homestead exemption from property taxes for public school purposes from $25,000 to $40,000.

If property taxes don’t excite you, don’t worry! There is plenty more to vote on at the local level. For example, Austinites are voting on whether to decriminalize marijuana and ban no-knock warrants during this election. And beyond that, many local elections will include school board races, an especially important issue this year as conservative politicians push for culture wars in the classroom.

For more information on these propositions and to see what’s on your local ballot, go to Vote411.org.

Your runoff ballot might differ greatly from someone else's, depending on where you live and which party’s Primary you voted in earlier this year. If you voted in the Democratic Primary, here are the races you’re guaranteed to have to vote on next month:

If you voted in the Republican Primary, these are your statewide races:

These races are only the tip of the iceberg. There are District-level elections for State Board of Education members, U.S. House seats, and Texas Senate and House seats up for grabs as well as a number of other local races. For more information on what’s on your runoff ballot, check out the Texas Tribune’s Primary Runoff sample ballot or visit Vote411.org as Election Day nears.

It doesn’t have to be this way.

Imagine a Texas with fewer elections to keep track of. One where you only have to show up to the polls every once in a while. Sure, we’d probably have just as many buttons to click in the end, but at least we wouldn’t have to drive to the polls as often as we go to the grocery store. Such a future is possible. The Texas Legislature has the power to change how many election dates there are in a year, they just don’t seem as keen on consolidating them as we are. Low voter turnout is GOP bread and butter, evidenced by suppressive voter laws and Texas’ longtime history of gerrymandering.

If Texas’ elections were to be consolidated, it would probably look one of two ways: a further meshing of statewide and local races or the adoption of ranked choice voting in primary and general elections. Ranked choice voting, otherwise known as instant runoff voting, has already been adopted in other states, so why not here? If implemented, rather than having a separate runoff election post-primary and general, voters would rank their choices on the ballot. In such an election, if any candidate gets a majority of votes, they win. If no candidate gets a majority, the candidate with the fewest votes is eliminated and voters who picked that candidate as "number 1" will have their “number 2” vote counted instead. The process repeats until one candidate is left with the majority of votes.

We can all dream about such a future but, for now, we have to deal with the chaos our legislature has caused.

Need to register to vote? Check out GoVoteTexas.org to see all the ways you can register.

Already registered? Check your voter registration status on the Texas Secretary of State's website to make sure everything is up to date before either Election Day hits.