You’ve Got a Friend in Me 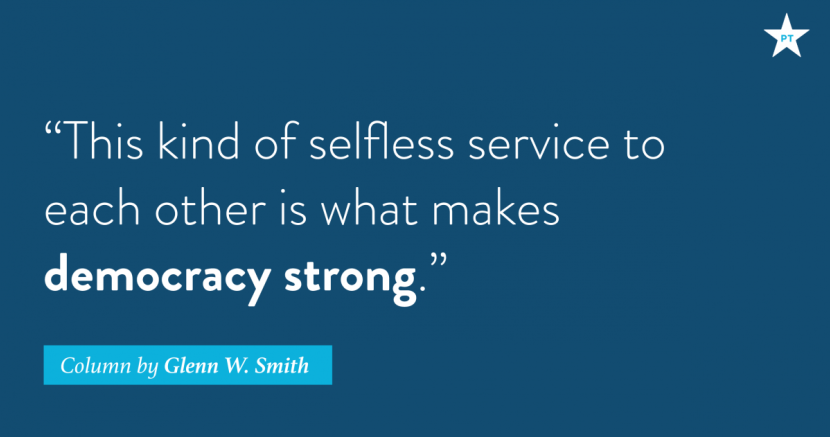 Glenn W. Smith
Glenn Smith wonders whether a political storm over Hurricane Harvey recovery has been calmed. But is it still political hurricane season?

Was it just a tempest in a teapot, this brewing storm between Gov. Greg Abbott and Houston Mayor Sylvester Turner? You be the judge. Their joint press conference in Houston today sounded something like this.

Abbott brought $50 million worth of love to Turner, an amount that helps the city avoid a temporary tax increase for recovery efforts.

That’s enough to make anyone sing like Randy Newman sings in “You’ve Got a Friend,” from the film, Toy Story:

When the road looks rough ahead

And your miles and miles from your nice warm bed

You just remember what your old pal said

You’ve got a friend in me.

“I don’t come empty-handed today,” Abbott said. “We are here to help you and to help you rebuild.”

Abbott said he and Turner speak frequently, and that the Mayor told him he needed $50 million. And so ends a little water-spout-like back-and-forth between the two that made Abbott look like an uncaring skinflint. As noted, $50 million buys a lot of love.

Turner thanked Abbott, noting for the folks of Houston that the gift – which comes from the state’s Disaster Relief Fund – will allow the city to avoid a temporary tax hike. But Turner cautioned that there are hundreds of millions of dollars in damages in Houston and throughout the areas pounded by Hurricane Harvey.

It’s interesting to watch politicians cope with disasters. It’s why they are in office, after all, to lead at times like this. But a good bit of time they seem like fish out of water, if you’ll pardon the expression.

Just think of President Donald Trump with regard to the human tragedies unfolding in Puerto Rico following its devastation by Hurricane Maria. No food. No water. No fuel. Millions of people fighting off disease, hunger, thirst, homelessness. Trump said it’s hard to offer assistance to an island “in this thing called the Atlantic Ocean.”

Puerto Rico is actually in the Caribbean. That’s what I mean about politicians being fish out of water.

Maybe Trump is afraid to send more vessels with assistance because so many of the ships he does sail, in the Sea of Japan for instance, wind up running into freighters and such.

Politicians on the Right can seem particularly challenged post-disaster, like George W. Bush after Hurricane Katrina. Remember that old line from Ronald Reagan: “The most terrifying words in the English language are, “I’m from the government and I’m here to help.” Anti-government zealots love that line.

And then, of course, they run smack into disasters which require them to reassure folks by saying, “I’m from the government and I’m here to help.”

Of course, in that circumstance, few politicians can be as terrifying as a hurricane, wildfire, earthquake or other natural disasters. (Trump does seem to give it try, though.)

Anyway, there’s no separating politics from natural disasters. You can bet that Abbott’s political consultants rushed to tell him that appearing to stiff-arm Houston wasn’t necessarily good politics. That’s not a bad thing. The consultants were right. There would have been and still might be political consequences for failures in recovery efforts.

It does seem rather cold, however, calculating one’s one political fortunes in such a circumstance. It can look like a guy’s reaction to a deadly flood is to drop a line and go fishing from his roof. Even disasters can be opportunities.

As noted before, however, the people of Texas seem to have led their politicians into a better place following Hurricane Harvey. The courage of folks displayed over and over, the commitment to one another’s well-being, the steadfastness and optimism even in dire circumstances – it was heartening.

Let’s hope future political leaders were paying attention. This kind of selfless service to each other is what makes democracy strong and civil society healthy.

After all, as Randy Newman sings,

There isn’t anything I wouldn’t do for you

We stick together we can see it through

You’ve got a friend in me.

Even if we don’t have 50 million smackers to give each other.